Ever since the first season aired a few years back, it was clear that BoJack Horseman was not like any other show that is on TV at the moment. The story of an anthropomorphic horse, who just so happens to be a washed up celebrity with an alcohol problem ,turned out to be one of the darkest, most insightful looks into human nature ever seen in an animation and the show’s third season finished up by taking us to places even darker than we’d previously imagined. 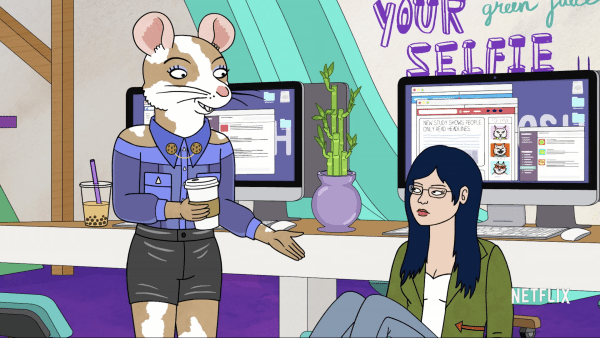 Season 4, however, starts on a much brighter note – a gentle easing back into the twisted world of BoJack and his friends. Mr. Peanut Butter, the lovable, but somewhat naive dog, is running for state governor, Todd – BoJack’s long suffering housemate – is still up to his inane escapades, Princess Caroline is trying to adjust to a more conventional life and Diane is trying to hold everything together, and also get through to BoJack.

The most notable thing about ‘See Mr. Peanut Butter Run’ is BoJack’s absence. Following the events of Season 3, BoJack has gone away, presumably to try and discover himself, or at least to try and deal with the consequences of Sarah Lynn’s death. The episode still manages to keep him there in spirit though, as Diane spends the whole episode leaving him voicemails, explaining how much she needs him in life, but also how she understands that he needs to do whatever he is doing.

Todd also manages to supply his usual hilarious antics. This time, having accidentally tipped away all his money at the end of last season, he is gifted a ‘drone throne’ by his friend, which he proceeds to fly around, stealing some rich people’s kettle corn in the process. Why? You know much as I do, but it’s pretty darn funny either way. 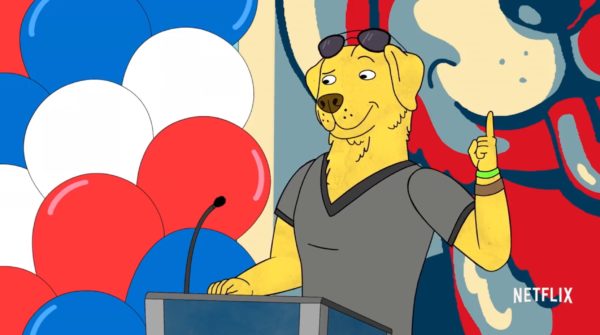 The episode is also jam packed full of great gags and colourful characters. From Vincent  D’Onofrio appearing in the show’s opening scene to great little jokes about Paul Blart and Arnie, the show rarely lets down in the humour department. It also features a hilarious anti training montage, which sees Peanut Butter graduate from Ski School over the course of one day.

While the episode may relent from the intense character studies that have gone on to define Bojack, it still manages to find the time to satirise the electoral system in America, with Mr. Peanut Butter’s election campaign being an absolute farce and the candidate having to come up with nonsense proposals to win himself votes. The show’s ending indicates that there is a lot more where that came from as well.

‘See Mr. Peanut Butter Run’ is a gag filled and gentle return back into the void that is BoJack Horseman. It’s a fairly light hearted episode that sets plenty up for the coming 11 episodes.

What did you think of ‘See Mr. Peanut Butter Run’? Let us know in the comments below, and let Liam know on Twitter @liamhoofe