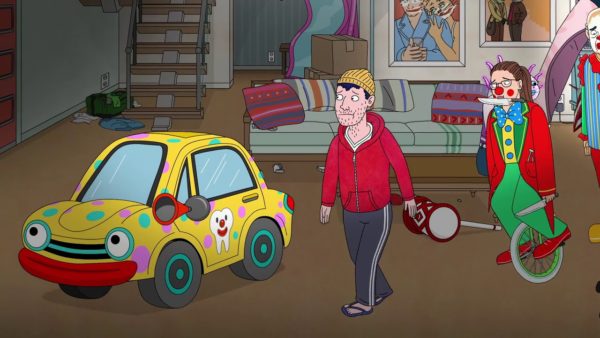 With only three episodes left to go, BoJack Horseman season 4 is beginning to set the wheels in motion for its big finale, and the episode opens with a tease that is likely to have a serious effect on BoJack for the remainder of the show.

Things kick off with Hollyhock playing cards with BoJack and Beatrice; except, she seems dazed and confused. A matter of minutes later and she is being rushed to a hospital, having collapsed in BoJack’s bathroom due to what appears to be some sort of seizure. The opening credits then hit and we don’t hear from BoJack and Hollyhock until later on in the episode.

Instead, we focus on the two subplots that have been prominent this season – Mr. Peanutbutter’s political work and his marital troubles, and Princess Carolyn’s crisis and heartbreak.

Season 4 of BoJack has not been one to shy away from political satire this season, and while the campaign storyline has somewhat lost its bite by this stage in the season, it still manages one last punch – parodying the whole Donald Trump’s hands nonsense that took place mid-way through last year’s election. Jessica Biel is still a whole load of fun as Woodchuck’s rival as well, and the ridiculous scandal about avocados that costs her the election seems like another slight dig at last year’s e-mail scandal.  The episode also continues Todd’s hilarious plotline with his dentist clown business – with the business coming under threat due to it not meeting any sort of medical laws whatsoever. 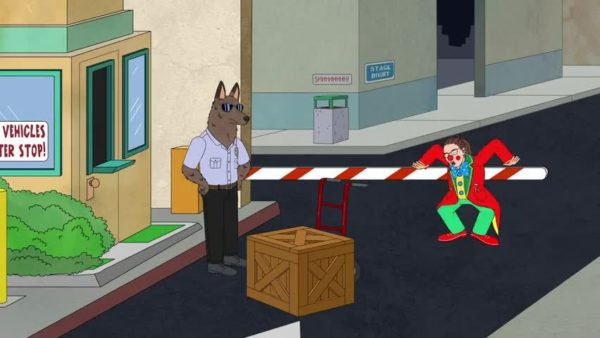 What’s more important about this storyline, though, is the problems that have arisen between Diane and Mr. Peanutbutter. At the end of the episode, when Woodchuck has won the election, Mr. Peanutbutter sees this as a victory for the couple, while Diane, quite clearly, is struggling to feel the connection in their relationship.

Princess Carolyn is still struggling to get her act together following the events of the last episode when, out of the blue, a scriptwriter arrives on her door with a script entitled ‘Philbert’, which just so happens to be the hypothetical name of her unborn child. She sees them as a sign that she has to pull her act together, and enlists Turtletaub to help her get the project off the ground. Turtletaub is happy to take the project on, but there’s one problem – he wants BoJack in the lead role. This could well end up being a key storyline going into the show’s fifth season.

BoJack, as a show, has always had the habit of cutting forward in time, often coming up with title cards that say ‘one week later’ etc. While there is an argument that this is done for comic effect, I lean more towards the idea that it is an effective way of showing just how little use we often make of our time. Life doesn’t just jump from big moment to big moment, there is a lot of time in between when we are just doing a whole load of nothing. There is an emphasis on this in BoJack, especially with the main character. BoJack spends so much of his time, drinking and sleeping, that days, if not weeks likely just pass him by.

So, one week later, we get to find out what has happened to Hollyhock. After being introduced to all 8 of her dads, BoJack discovers that Hollyhock has overdosed on some sort of pills. It’s a stomach-dropping moment for both BoJack and the audience. How did he not see that his daughter was taking pills for her weight? The clues had been there all season. The news hits BoJack like a ton of bricks, and it’s tragic to watch. All season it has looked as though he has been on the right track with her, and now, without realising it, he is let her down in one of the worst ways imaginable. It’s also made all the more heartbreaking when BoJack lists all the things he loves about his daughter. It’s a rare showing of real love from BoJack and it makes the situation feel all the more devastating. 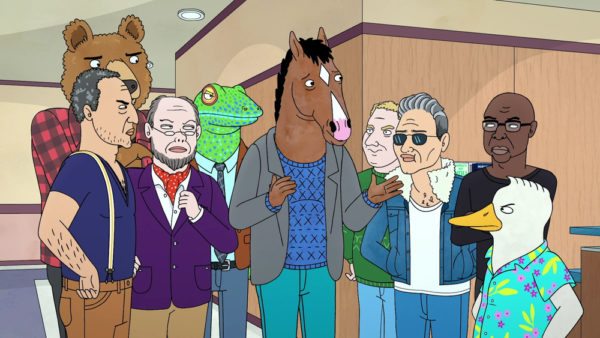 It’s BoJack Horseman we are talking about here, though, and there the episode still has one last sting in its tail. While going through the cupboards, BoJack discovers a box of pills and realises that Beatrice has been drugging Hollyhock to try and get her to lose weight. It’s a moment that has serious ramifications for the family as a whole. BoJack is no longer able to see Hollyhock, and it is all his mother’s fault. Full of rage, BoJack drives his mom to the worst care home he can find, and leaves her, telling her that she has gotten exactly what she deserves from life. Then, as he walks away, Beatrice utters the word ‘BoJack?’ and the credits roll. How BoJack will react to this in the coming two episodes is anyone’s guess, but chances are it’s going to be a difficult watch.

‘Loving that Cali Lifestyle’ continues to develop the show’s biggest plot points as it races towards its conclusion. It’s a nice set up for the season’s finale and the effects this episode will have on BoJack’s future are potentially massive.

What did you think of ‘Loving that Cali Lifestyle’? Let us know in the comments below, and let Liam know on Twitter, here- @liamhoofe