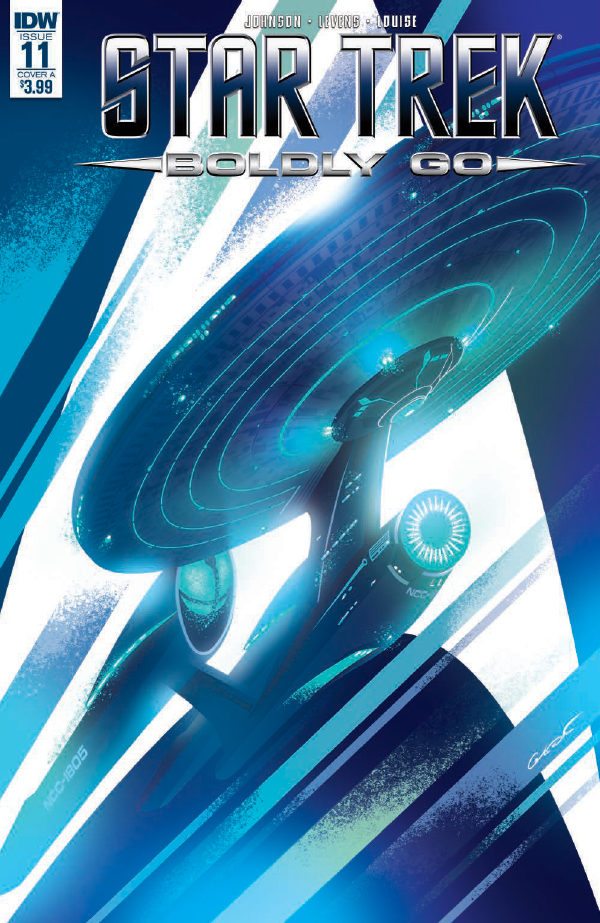 After the summer break we return to Star Trek Boldly Go touching on the past, and a turning point in the Federation’s history with Captain Garth and the return of Eurydice along with her daughter Thalia, who we last saw in Star Trek ongoing #45.

With our story opening on Captain Garth, we get to witness a rather bold maneuver in which the USS Heisenberg outwits Klingon Battle Cruisers above Axanar.  Years later, this tale is being recounted to the Starfleet Academy with Cadets Kirk and McCoy in attendance.  Then even more years later we witness Captain Garth meeting his fate on Antos IV.

Time passes and we join Kirk on board the Endeavour, reflecting on how he’s going to miss both ship and crew, though this reflection is cut short by the arrival of Thalia – without Eurydice.  Her mother has gone missing on Antos IV, and Thalia has come to Kirk to ask for his help.  With a debt to be paid, as well as a daughter without a mother, Kirk takes the USS Endeavour to said planet.

Well this is an odd comic.  Mike Johnson has delivered something where you could almost track my feelings towards it like an oscillating wave.  Beginning with Garth and Axanar, I was as giddy as a child wondering what Mr. Johnson was going to deliver and a little confused as to why Eurydice was on Tony Shasteen’s (B) cover.

‘Was this somehow going to link in with the upcoming Star Trek Discovery series?’, I wondered – though it doesn’t seem to be I’m afraid.  Then I’ll admit, I dipped slightly when Thalia appeared; she knew where Kirk was and on what starship due to the “right price”.  I became a little jaded by what was being delivered.  However, come the close and with the little mystery being left, my interest was piqued again.

Unfortunately I also have another mild negative, this directed towards the artwork from Megan Levens, which I have to say I have sung the praises about before.  Although there are some great moments within this issue, I found it difficult to recognise Kirk.  I know I’ve requested the rotation of artists in the Trek comic book series, and I still want this (including Megan), I just want Kirk to look like Kirk.

I’m interested to see where this episode takes us; the closing scenes of Star Trek Boldly Go #11 certainly pulled this issue back up to enjoyable.