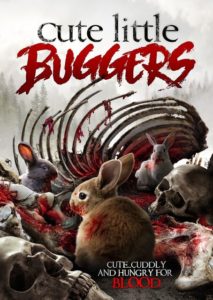 A quaint English festival is rudely interrupted by curious outsiders, criminals, tourists and bloody terror from beyond the stars, as aliens seeking to repopulate their dying race unleash a terrifying and monstrous creature upon the locals – the rabbit.

Those expecting an introspective film examining the complexities of life in rural England since the Brexit vote, or hoping for a deep complex drama about the troubled relationship between a son and his estranged father, might want to look elsewhere. Cute Little Buggers is exactly the kind of film you think it is. An unpretentious, gloriously silly and cheesy love letter to the B-movies of the past. It just isn’t a very good one.

Let’s get my verdict of the film out of the way early shall we? This film is bad. Very very bad. However, it’s one of those films that wears its awfulness like a badge of honour, completely aware that it’s a turd and proud of it.

The acting in this film is possibly some of the worst I’ve ever seen; with it ranging between gloriously amateurish to hilariously over the top, it’s practically impregnable to serious criticism. I love the old hunter with “tally ho chaps” cavalier attitude, even if he comes across as the stereotype of what a UKIP voter looks and sounds according to a left-wing student.

The dialogue is even better with it likely to rival the work of Harold Pinter in its complexity, with lines like “Have you ever had your arsecheek signed by a celebrity?” and “Who’d have thought taking the piss would be to our advantage?”.

Again, I really can’t complain about the dialogue because it’s supposed to be absurd. It is really bloody repetitive though, with the screenwriters seemingly trying to squeeze as many curse words into every sentence as possible, with many exchanges sounding like they were written by a thirteen-year-old who thinks he’s being “edgy”.

The special effects are your bog standard low-budget CGI gorefest, with much of it looking about as convincing as the government’s Brexit strategy (there’s a joke that’s going to be dated in a while). Although I’ll give props to the look of the evil aliens Brian and Ernest (yes really) who resemble the kind of aliens you’d see on an old 1970s episode of Doctor Who, only more convincing.

In reading my review, you’d think that Cute Little Buggers was somehow immune to serious criticism. I mean, after all, it’s a deliberately trashy sci-fi B-movie about killer rabbits, you’re not supposed to take it seriously, you’re just supposed to have fun with it. Except that’s the main problem. It just isn’t fun to watch.

This film was a chore to sit through with the awful acting, awful writing and awful effects being just too much to stomach at times. The jokes weren’t funny, the plot wasn’t funny, the effects weren’t funny. Instead, it was the worst thing that this film could have been – boring.

Cute Little Buggers is a ludicrous film that should have been a ludicrous piece of B-movie fun. A classic “so bad it’s good” movie that you can watch while riffing along with your friends. However, it’s irritating characters, overlong runtime, unfunny jokes, and frankly boring execution leave it a film that stops being “so bad it’s good” and circles back to just being “bad”.

Only seek this one out if you’re curious and definitely watch it with your friends because it beats suffering alone.

If you want to see a proper “killer rabbit” film (there’s something I never thought I’d write) check out the hilariously stupid Night of the Lepus, a film that treats its ludicrous plot like that of the most serious of dramas, creating one of the funniest accidental comedies in the process.