Episode two of Philip K. Dick’s Electric Dreams is titled The Impossible Planet.  Originally published back in 1953 within the American Science Fiction and Fantasy magazine Imagination, this latest iteration is delivered by David Farr (The Night Manager, Hanna, McMafia) who is handling both writing and directing duties.

Set far in the distant future, we find two disenchanted Interstellar Tour Guides, Brian Norton (Jack Reynor) and Ed Andrews (Benedict Wong), trapped on a backwater planet called Primo76, entertaining droves of tourists with visually enhanced excursions throughout the galaxy.  Then opportunity knocks in the form of a deaf, elderly woman called Irma Gordon (Geraldine Chaplin) and her robot RB29 (Malik Ibheis), who wishes to see Earth one last time and will pay cash to do so.

Seeing this as an unmissable chance Andrews convinces Norton that he can scam Mrs.Gordon, making her believe that they can get to Earth, though in fact they’ll only travel to a similar planet, as Earth has been lost for centuries. Norton isn’t happy with this plan, but as all of his other options have gone for leaving this job and Primo76 – with his girlfriend (Barbara) – he grudgingly agrees.

With the journey taking longer than the normal tourist run, the guests and crew intermingle.  We discover that RB29 holds Mrs. Gordon’s final wishes extremely close to its robot-like heart.  Not only this but fate may have dealt both Norton and Mrs. Gordon a hope, as a life long ago surfaces.

There’s often a complaint with Philip K. Dick transfers that they (a studio) takes the title, or a shard of the initial story and attempts to grow something from it, losing what was initially found within the words of the sci-fi master’s tale. However, David Farr’s interpretation of The Impossible Planet is practically identical to the original work. 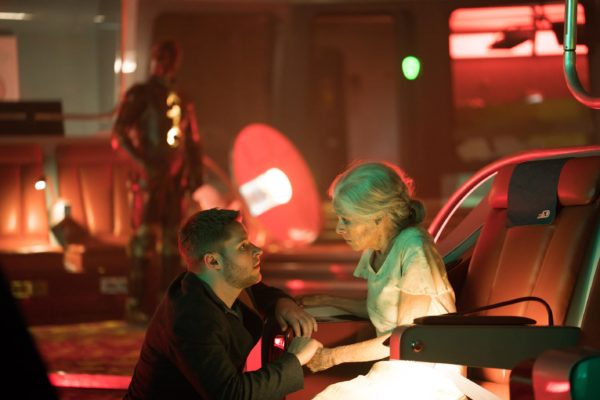 There are elements woven in that obviously that never existed, here it’s the genetic memory, a past love (à la Cloud Atlas) intertwined between two of our travellers. This brings in a touch of heart to the Philip K. Dick tale, where there was originally none, here it makes the end of the story more beautiful rather that brutal (the original saw Irma and the robot leave the ship and Andrews leave them in the toxic wastes of a dead world).  Though it may not make everyone happy, I’ll be honest I myself felt it went well.

This was a rather excellent episode of Electric Dreams, and David Farr did well not straying too far from the source material.  Along with this our minimal cast on the dim but at the same time scorched neon set, were fantastic.  Also having RB29 look like a cross between Bicentennial Man and Doctor Who’s Robots of Death is always a winner – that and bringing in music from Brian Eno too (and have some more applause).  This is clearly a great slice of sci-fi.