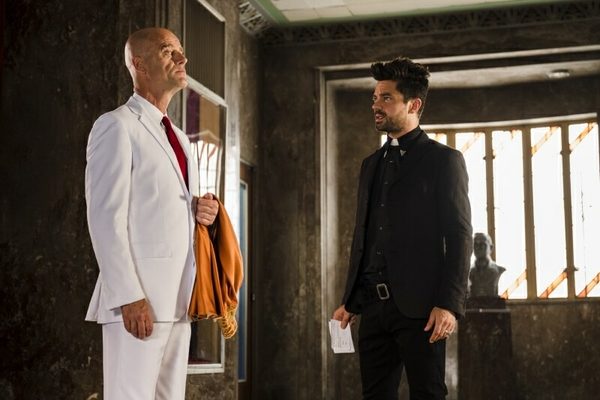 Preacher has redeemed itself with a season closer brimming over with invention, heart wrenching emotion and caustic cultural reference. Meandering, concise, far-fetched and theologically challenging, Jesse, Tulip and Cassidy are back on point while Herr Starr is gloriously dry witted and indifferent. Whether choreographing fist fights to classic George Harrison or taking a side swipe at the fickle nature of celebrity, ‘Preacher’ retains a freshness and dramatic balance which bodes well for season three.

Joseph Gilgun takes centre stage fighting inner demons, carnal temptations and bloodlust whilst his son Dennis does nothing but quietly goad him on. These scenes combined with the slow motion knife fight ten minutes in, serve as our dramatic meat and potatoes for this episode. Sound effects play a major part in dialling down extraneous noise, drawing you into Cassidy’s consciousness and challenging our perspective. Deceptively simple and done with such subtlety they provide one of three truly shocking moments in this finale. 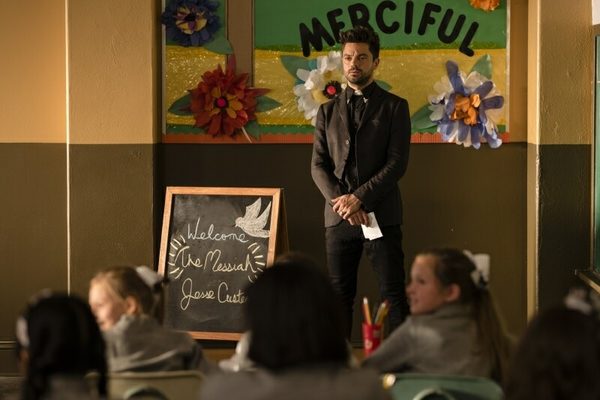 Pip Torrens and Dominic Cooper serve as the comic relief trading sarcastic barbs and indifferent moments of honesty as they spread the word. Like a politician on the campaign trail Custer is starting small and building his following, abetted by a very creepy Svengali both world-weary but single-minded. What makes this episode so good remains those subtle character moments conveyed by a look, gesture or juxtaposition of the situation.

Torrens is especially good at milking these without knowingly nodding to camera. Elsewhere humour and dramatic tension are drawn out by three actors who know their characters intimately. Gilgun and Cooper share a moment towards the end which is neither darkly humorous, metaphysically self-aware or played for a reaction. This is the culmination of two seasons condensed into ten seconds of screen time. It hits you on a gut level only minutes after Cassidy has purposely crossed the line elsewhere. Biblically speaking this is an eye for an eye territory manifested through carnage, claret and Messianic mayhem. Everything from there on in gets quieter, more introverted and religiously influenced. Beyond that there is the matter of one Eugene Root and Herr Hitler on the lam. 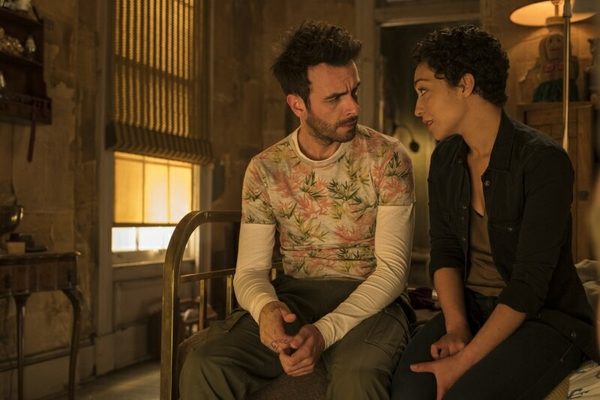 Having built up trust across the season it seems strangely fitting that a final curveball should come from these two mismatched men of dishonour. Noah Taylor has played Hitler with a softness, fragility and compassion which has never felt easy, while Coletti continues developing a strength to underpin his inherent innocence and naive. Breaking the rules of life and death we find them both at a problematic impasse come the close. Celestial public transport issues aside, this sub-plot finally gives us something of promise to work with, which may grow on par with the central narrative given time.

Satisfyingly inconclusive yet staggeringly inventive and insightful from the beginning, this finale lays seeds, plants promise and encourages naysayers to eat their words. For those still willing to listen Preacher definitely has something to say.