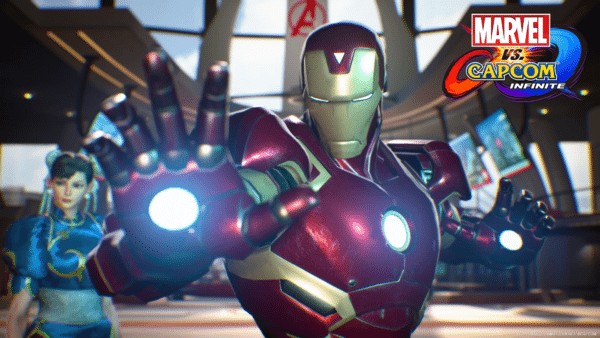 With humour so cheesy it melts in Dormammu’s mouth, Story Mode is the first major addition to the series you come across in Marvel vs. Capcom: Infinite. It sets itself up like an origin story, detailing the convergence of the Marvel and Capcom universes and how that came to be. Not simply Marvel vs. Capcom in the traditional sense of arcade battles, but Marvel and Capcom, as the hero characters work together to put a stop to Ultron Sigma and a number of villains native to their respective universe. While painfully cheese-based to begin with, the signature humour – primarily from the Marvel side until Frank West shows up – kicks in and the mash-ups become far more enjoyable to watch, rather than something to endure or skip through. Reflecting Capcom’s decision to implement a Story Mode, Marvel vs. Capcom: Infinite steps back from a more cel-shaded approach and moves toward a Marvel cinematic universe visual style with 3D cutscenes and fleshy character models.

This mode showcases the characters available and the accessibility aspect that Marvel vs. Capcom: Infinite is focusing on this time around; employed to give newcomers a fun, breezy experience, while catering upwards to the more seasoned fighter. How does it do this? Well as an experiment I played through the entire mode using basic controls and the newly implemented ‘Easy Hyper Combo’, which is activated by simply hitting the two strong attack buttons. So, during my play through of Marvel vs. Capcom: Infinite for Dummies, I made it all the way to the final boss – which was the only point which required a significant learning curve to take place. The story mode doesn’t really train you beyond a few pointers during the first fights and as Infinity Stones come into play, so it’s worth hitting the training arena if you hit a block in the road. The command lists are not as lengthy as those found in something like Tekken, so you can pick up a few moves reasonably quickly with a user-friendly icon based UI. Essentially, this demonstrates that solo-play can be done with the most limited of knowledge. Of course, things become more complex as you blend combos and moves together. Doctor Strange, for example, can spawn Tears of Agamotto which can create a deadly path for Flames of the Faltine. 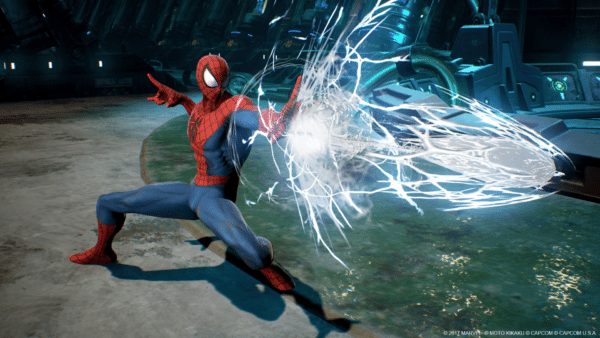 So, you’re not a dummy, what’s in it for you? Here’s what’s happened with the combat system and what this offers to those of you who are used to the franchise. Marvel vs. Capcom: Infinite doesn’t drop entirely to the casual level – the command lists don’t deviate much from the previous entries and has made adjustments rather than a complete combat overhaul. For example, let’s look at Spider-Man here:

Normal commands aside, the ones marked with an asterisk are the new moves for Spider-Man, following from Marvel vs. Capcom 3: Fate of Two Worlds. The only one of real significance here is the extra Hyper Combo, which you can only activate when the Hyper Gauge is at level three and places itself as that character’s ultimate ability. ‘Assists’ have also been removed in favour of a tag-team combo system, which utilises the instant character switch using R1. Combine these tweaks with the reduction of 3-on-3 fights down to 2-on-2 and the introduction of Infinity Stones; each carrying an additional active power (Infinity Surge) to use in battle and a devastating Infinity Storm based on the properties of your chosen stone, this creates a foundation for strategy. Allowing room for creative thinking, the polishing of the combat system retains fidelity to its players and becomes even more multi-faceted, but in a way that still manages to push accessibility forward. 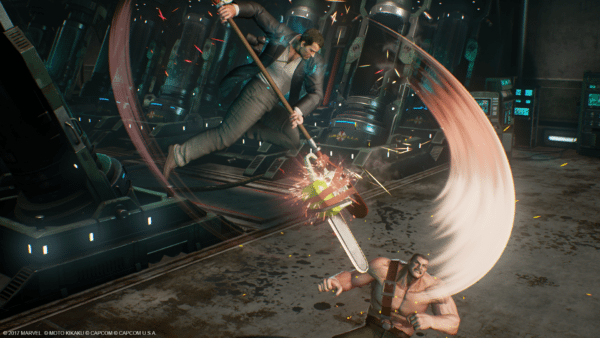 Problems? Well, as we saw in the preview some of the character models are a little off, while this isn’t horrendously glaring, when the game has a larger file size than Bloodborne that raises an eyebrow or two. It has an absolutely gargantuan install file for what it is, with reasonably long loading times to boot. I had to delete a fair few games off of my system to install it and wouldn’t begin unless I had at least 60gb free. The game itself appears to install after an hour or so, until you realise that to play the story mode or any arenas other than ‘Unknown’ you’ve got another half a day of waiting until you can play the content fully…unless you fancy Training for 5 hours. As the final file size comes in at 48GB, not far behind Witcher 3 (including its DLC) this seems excessive for the product at hand, and can only assume this is due to the Story Mode and overly large uncompressed files for the cinematics. The roster also seems to have taken a backseat here, smaller in size and a much greater focus on the Marvel side of things is felt. The focus has been the gameplay refinements, additions, and its debuting Story Mode. You can see that DLC is going to become a big part of Marvel vs. Capcom: Infinite at some stage. Monster Hunter has already been hinted at, which would certainly spice up the Capcom list. 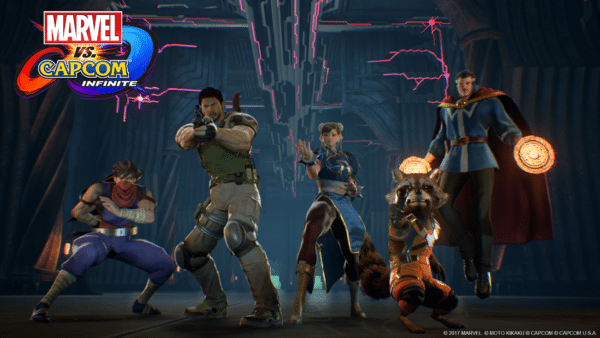 Marvel vs. Capcom: Infinite presents a solid foundation for newcomers, without scaling back on creative intricacies for more experienced players. It may be flawed, but seeks to improve and experiment with the status quo set by the franchise. Prepare for enjoyable combat, as you frolic through the shared universe, and witness mash-ups you never thought you would see in action. Morrigan coming on to Ghost Rider is…interesting, to say the least.

+ Brings a level of accessibility to the series