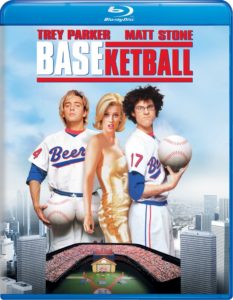 Two childhood friends create a national sport called BASEketball, a hybrid of baseball and basketball, and must deal with a greedy businessman scheming against their team.

BASEketball has hit Blu-ray for the first time ever and it’s about time that it is finally released after all these years.  At the time of its release the film wasn’t well received by critics, nor was it seen by many people, what with it having a rather poor box office run. With David Zucker (Airplane!) behind the camera and South Park creators Trey Parker and Matt Stone on board to write and star, this had all the right stuff to be truly great. While it may not be one of the best comedies of all time, it is certainly one of the more underrated comedies from the 90’s and definitely didn’t get the attention it deserved.

The film follows Joe and Doug, two down on their luck guys who really have nothing going for them. While at a party with a bunch of acquaintances from high school they create a game that essentially combines basketball with the rules of baseball, which they call ‘BASEketball’. After a while it starts to catch on around their neighborhood and it actually grows into quite a popular sport. Businessman Ted Denslow (Ernest Borgnine) approaches Joe and wants to turn BASEketball into a professional sport. Jump five years later and the sport has become one of the most popular among audiences. When Mr. Denslow passes away, in rather ridiculous fashion, he hands over the rights to the team to Joe, but rival owner Baxter Cain (Robert Vaughn) has other intentions and sets out to make sure the rights doesn’t stay in the hands up Joe for long.

Going into this film you really have to know what you’re getting into. It’s a dumb comedy that gets by on just how ridiculous it can be. Having a guy like David Zucker as director definitely helps and combining his style of comedy with the creators of South Park makes it a perfect match. Not everything hits when it comes to the jokes but when a one liner or sight gag does work it usually is hysterical. One has to wonder why this film wasn’t seen by more people at the time of its release. You could argue that neither Trey Parker or Matt Stone are big draws outside of their voice work and I’m sure that probably had a lot to do with it. Despite its poor stint in theaters however, this has become somewhat of a cult classic, as it rightfully should be. 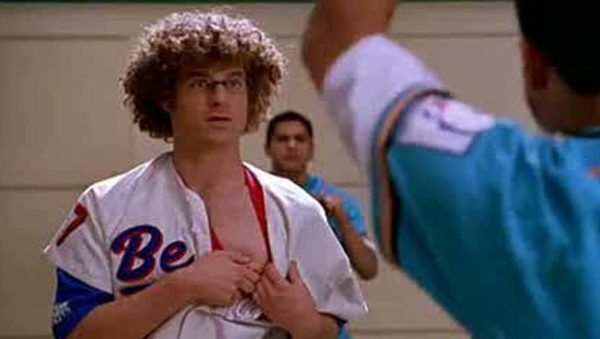 The best parts here are the actual games of BASEketball. Things get so crazy during the game play that you almost wish that it was a real sport. The funniest gags come from the psyche-outs during the games. When a player goes up to shoot, a player from the opposite team can basically do whatever he wants to distract the player so he misses the shot. There is a montage of psyche-outs that makes for some of the best jokes in the film. Thankfully Trey Parker and Matt Stone are best friends in real life because it really shows in their chemistry on screen. Even though they are better voice actors, they both do a pretty solid job at acting here and really do carry the film. Outside of that duo, the rest of the cast is used either to further the plot or act as a glorified cameo. Some of them work while others feel like they’re trying too hard.

If you’ve missed BASEketball after being out for almost 20 years, you should seek out this new Blu-ray to finally see it. The film is insanely dumb but if you know what you’re getting into then you should have a lot of fun.