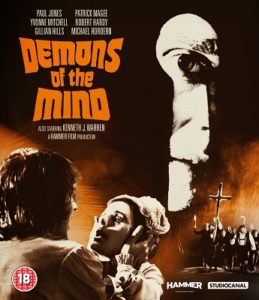 A physician discovers a web of sex, incest and Satanism in the house of a wealthy Baron.

Coming at a time when Hammer Films badly needed a hit as dwindling audiences were getting their horror fixes from the ‘real world’ terrors of US movies such as The Last House on the Left and Night of the Living Dead, Demons of the Mind also eschewed the myths and monsters from fantastical lands but retained the period gothic setting that had become a trademark of the studio since the late 1950s.

With more than a passing nod to Poe’s The Fall of the House of Usher, Demons of the Mind stars Robert Hardy (Harry Potter & the Chamber of Secrets) as Baron Zorn, an aristocrat who lives in a huge castle with his teenage children Elizabeth (Gillian Hills – A Clockwork Orange) and Emil (Shane Briant – Frankenstein & the Monster From Hell). Zorn believes that both children contracted a hereditary ‘curse’ from his wife before she committed suicide and, along with their Aunt Hilda (Yvonne Mitchell – Woman in a Dressing Gown), keeps both children prisoner in their home, drugging them to try and keep them from escaping, regularly drawing the ‘bad blood’ from their bodies by way of torture and trying to keep them apart as they have a strange incestuous attraction to each other.

After the latest escape attempts from the children, Zorn calls upon a physician named Falkenberg (Patrick Magee – The Black Cat) who claims he can cure the children of what the restless villagers regard as the evil that haunts them. Falkenberg is joined by young student Carl Richter (Paul Jones – Journey Through the Black Sun), with whom Elizabeth has been sneaking out to visit and who believes that he can rescue Elizabeth by taking her away from her odd family, but as Falkenberg uses ever stranger methods to try and root out the evil he discovers that perhaps it is not the children who need help.

Demons of the Mind is a valiant attempt by Hammer to add a few psychological thrills to a story that was originally going to be a werewolf movie until someone made the decision to sidestep the traditional Hammer horror stylings in favour of something a little more cerebral. A bold move on Hammer’s part as monster movies were what they were known for, and the studio had only produced one werewolf movie in its history – namely 1960s The Curse of the Werewolf – so it isn’t like they had exhausted that particular creature. However, the times were changing and unless it was Christopher Lee or Peter Cushing reprising one of their Dracula/Frankenstein roles for a guaranteed hit it appeared that the studio needed to diversify so the original script was reworked into a twisted melodrama that tapped into the usual good-versus-evil themes that Hammer traded in but with an eye on the horrors of what man can inflict on man when driven by his or her own inner demons.

But despite the merits of making such a move away from their traditional fare, Demons of the Mind isn’t actually a very good film. It has an idea – granted, not a very original one but it is what you do with that idea that counts and unfortunately this film doesn’t do anything with the themes of family curses, incest and murder that Roger Corman’s The Fall of the House of Usher didn’t do a whole lot better over a decade earlier. Robert Hardy certainly chews up the scenery with his wildly over-the-top performance but he is no Vincent Price, lacking any charm or charisma to endear to him in any way as a desperate father thinking he is doing the best for his children. Elizabeth and Emil are both pretty vacant nonentities for most of the film, with Shane Briant doing what he can with a role that doesn’t give him much room for anything other than running around the castle and looking desperate, and even the great Patrick Magee feels like a spare part in a role that should have been as overblown and pompous as Zorn’s. It is only Yvonne Mitchell who provides any genuine depth as the matriarchal Aunt Hilda, herself an immediately more interesting character than any of her kin and played with an understated menace that the writing does not do service to.

As this is early 1970s Hammer we do get a little more gore and nudity than what we got from their 1960s heyday and the film does feel like somebody was trying to make Hammer up their game a bit to compete with the US market but the writing is so poor and the direction so flat that any underlying themes of science-versus-religion or sins of the father-style morality tales are completely lost amidst the messy script and hammy performances. The production does have a grand feel about it and the Blu-ray restoration does do it justice as far as visuals go but you’re likely to get more joy out of the 15-minute featurette on the genesis of the film in the special features rather than the movie itself because ultimately Demons of the Mind is an ambitious film made up of many parts that simply just don’t work as well as they should.