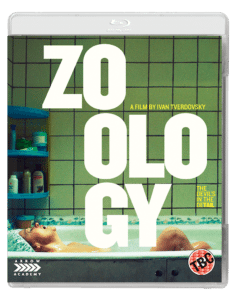 A middle-aged zoo worker still living at home with her mother begins to see her life turn around when an unexpected physical transformation starts to take shape.

Natasha (Natalya Pavlenkova) is a middle-aged admin worker at a coastal town zoo. She is constantly bullied by her colleagues, lives at home with her elderly religious mother (Irina Chipizhenko) and appears to have little or no interest in anything much apart from interacting with the creatures in the zoo. Nothing much seems to be happening for Natasha, until the unexpected happens. She grows a tail. X-rays and medical examinations follow soon after, and at the town hospital she meets Peter (Dmitriy Groshev), a young radiologist who shows compassion and sympathy towards her and her situation. Natasha’s life is transformed – both physically and socially – and a rush of new experiences and ideas await her.

Zoology is an intriguing  illustration of loneliness and depression and how the unexpected can turn life around. From the opening scenes when Natasha hides her cigarette smoking by using a spray to mask the smell, we are introduced to her capacity to hide and stay in the shadows. She is hidden from view by her closeted existence and her mother, whose religious influence becomes clear when Natasha resists taking off her cross necklace even when undergoing an x-ray exam. Her only reason for happiness seems to be the zoo animals (they are ‘all beautiful’) that she chats to at work. Her colleagues on the other hand are horrible examples of the human animal, bullying her and tormenting her at every opportunity. The religious aspect of the story is provided by the mother and two older patients at the hospital who talk of a woman with a tail possessed by the devil. Natasha listens to this superstitious gossip in silence, not once letting slip the truth of her own troubled existence.

Special features include an interview with the actor Dmitriy Groshev about his role and the making of the film. The Arrow Academy disc also features a critical appraisal of the film from the film historian Peter Hames.