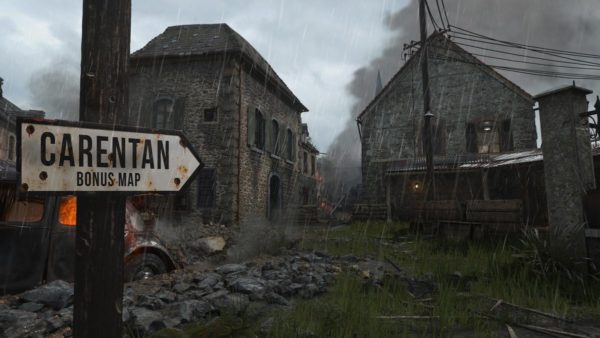 Activision has announced that the upcoming Season Pass of Call of Duty: WWII is set to feature a brand-new version of the classic Carentan map, which features in the original Call of Duty, along with Call of Duty: United Offensive and Call of Duty 2.

Carentan will be made available at launch as a Bonus Map for all Call of Duty: WWII Season Pass holders and allows players to fight through the destroyed buildings and fortified streets of this war-torn French town in an all-out battle for a strategic German stronghold.

Call of Duty: WWII tells the story of Private Ronald “Red” Daniels, a young recruit in the U.S. First Infantry Division who experiences combat for the first time on D-Day, one of the largest amphibious assaults in history. After surviving the beaches of Normandy, Red and his squad will fight their way across Europe, engaging the enemy in iconic battle locations such as the Hürtgen Forest and the Battle of the Bulge, as they make their way into Germany.

Call of Duty: WWII is set for release on November 3rd, and the action will continue through 2018 with four DLC packs including new and iconic multiplayer maps, all-new War Missions, and new chapters of Nazi Zombies.