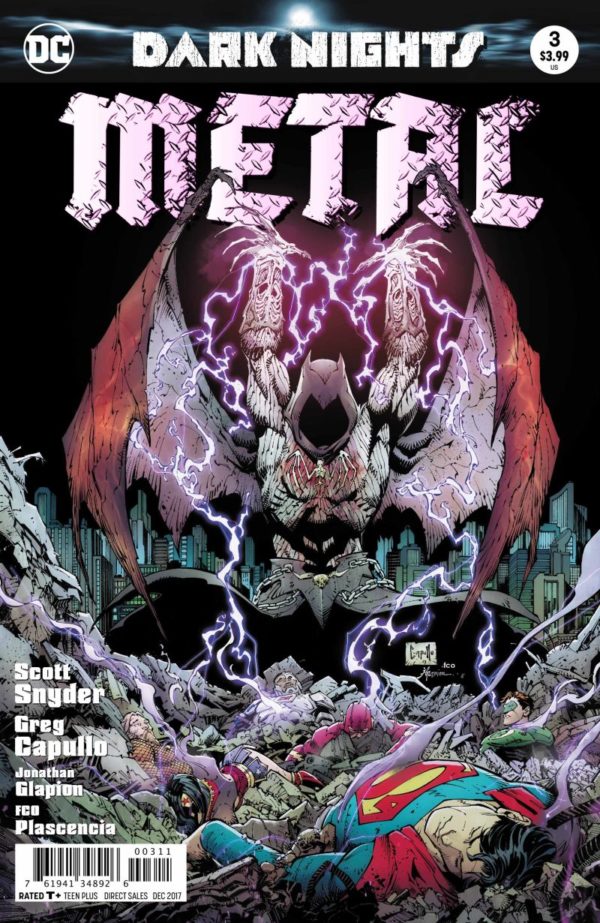 Scott Snyder and Greg Capullo certainly upped the ante in Dark Nights: Metal #3 as Superman and the Justice League are literally on the verge of defeat right at the issue’s beginning. The pair don’t pull their punches either; make no mistake, this is a very bleak issue as all the heroes get their butts kicked over and over again with little likelihood of bouncing back.

Batman is sidelined for much of the issue after being taken by the Nightmare Batmen, a group of alternate Batmen from the Dark Multiverse that are manifestations of Bruce’s worst fears. This leaves Snyder plenty of time to focus on writing Superman, Wonder Woman and a host of other DC characters he’s never written before. Its pretty refreshing and cool to see his takes on sone of the DCU’s most famous and obscure heroes. Snyder has written Superman before in his miniseries Superman Unchained, but his portrayal here is almost better, showcasing the Man of Steel’s never-ending hope and optimism in dark times.

In contrast, Snyder uses his Nightmare Batmen to a terrifying degree. Seeing Metropolis and Gotham and their inhabitants used in such twisted manners emphasizes the dangers these dopplegangers bring to the story. The Batman Who Laughs is already shaping up to be one of Snyder’s most memorable creations. We don’t get too many other looks at the other Batmen, but the few glimpses certainly conveys the threat very well. The book’s tone is dark, but it fits the direness of the story by exploring the darkness that lingers underneath everyone.

Capullo creates some striking visuals that stick with you. He certainly takes advantage of the dark tone, emphasizing just how much trouble the Justice League is in. The three zombie-like Robins chained to the Batman Who Laughs is one of the creepiest visuals of the whole story thus far. Much like Snyder writing new characters too, its very cool to see Capullo drawing characters he’s never worked on before, such as Green Arrow, Doctor Fate, Bobo and the Oblivion Bar. FCO Plascencia’s colours compliment Capullo’s work, utilizing his darks well while emphasizing the bit of light he uses, such as the brightness of Gotham’s snow or the bar lit by candle and firelight.

With three issues in, Dark Nights: Metal has shaped up to be one of DC’s most memorable events in years. Snyder’s work with the characters is great as he branches out beyond the normal Bat-family and Capullo takes full advantage of playing with other characters.  The exploration of light vs dark, both in subtle and not-so-subtle ways, is also one of the intriguing aspects about this story. It may be dark and creepy, but Dark Nights: Metal is a whole lot of ‘fun’.