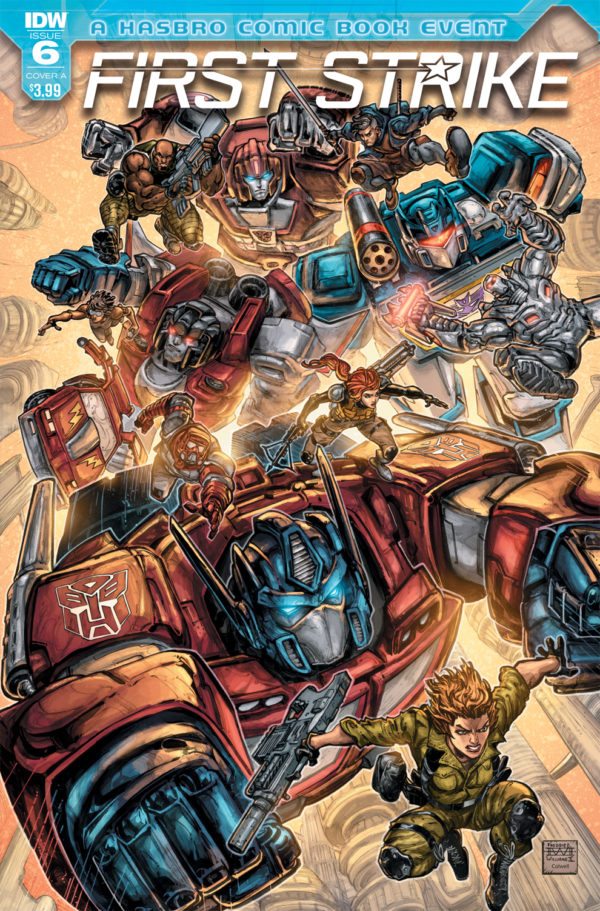 IDW’s big event series First Strike comes to an end as Optimus Prime and the G.I. Joes make one last ditch effort to save Cybertron. The finale gives a fairly satisfying conclusion to IDW’s second crossover, though there are a few structural problem in its story and artwork that keeps it from being a fully good closing chapter.

First Strike #6 is really a big brawl between Optimus and Scarlett’s team against Colton’s, making it one big battle royale as they fight to save Cybertron and the Transformers from Colton’s genocidal plan. Despite the action-packed nature of the issue, though, the plot does remain largely focused on philosophical battle waging between Scarlett and her former mentor. Scarlett and Colton have some very good dialogue with each other as they express their beliefs over why the other is wrong. Even Colton sounds like he’s making sense with some of his points, though clearly has gone too far in his bid to protect Earth. What was a nice touch was Scarlett deducing that deep down he knows he’s wrong, otherwise he would have asked them to take down Cybertron rather than working with Cobra and their other enemies.

Prime stays surprisingly to the sidelines in this issue, which is perhaps for the best since so much time is dedicated to Scarlett and Colton, though hardly any of the other characters get anything to do. There are some good moments with the supporting cast, but this issue doesn’t make too much use for them outside of a couple of cool action beats. Even Elita-One and Starscream are thrown in the fight almost at the last minute just to add in another complication for the team.

Mairghread Scott and David Rodriguez do craft a solid enough story. As said, the dialogue between the characters is well written with plenty of emotion behind Scarlett and Colton’s fight. They also add in a couple cool twists, one of which will have Transformers fans gasping at the end. The pair make good use out of the themes presented and analyzing the pyrrhic victory, however its not entirely clear what the villain Kreiger/Merklynn did to Cybertron and some parts seem more concerned with setting up some of IDW’s future series than completely examining the consequences.

That problem lies a bit more on the art side of First Strike #6 rather than the written. Most of the issue’s art is done by Max Dunbar with a short epilogue by James Raiz. Dunbar’s art is good for the most part, displaying some good facial work on Scarlett and Colton during their fight and Prime and a couple other transformers look cool. Where he slips is in depicting some of the character’s choreography as well as some fairly bland backgrounds. The climax of the fight itself is a bit confusing, again because it doesn’t clearly depict what has happened to Cybertron or how a city was raised onto the surface. Raiz’s short epilogue is drawn nicely with a lot of detail on the final two pages and will probably be the most talked about of the issue.

Overall, First Strike #6 was an enjoyable conclusion to the series, but not perfect. Scott and Morgan’s script is well-written with nice character interactions, particularly between Scarlett and Colton, but the other characters are pushed to the sidelines a bit too much. The artwork didn’t quite help either; though Dunbar’s art and character work is good, its not entirely clear what’s happening in some of the action or in the issue’s climax, hindering readers being able to fully take in and enjoy the artwork. Its still good, but ends with much less of a bang than expected.