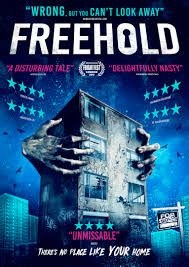 An oily, amoral estate agent is preyed upon by one of his victims, who quietly moves into his flat and, unseen, begins a deliciously malicious campaign of revenge 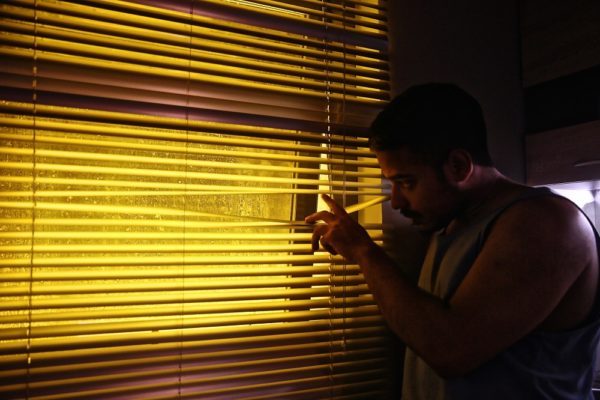 Have you ever been alone in your home and felt like someone was watching you? This is the premise of Dom Bridges’ darkly comic thriller Freehold. Hussein (Shaikh) is a perfectly groomed estate agent; he has the lazy boy armchair, all the gadgets, he’s great at sales and has a seemingly perfect life. However, he is amoral and doesn’t care about screwing people over to make a sale. Unbeknownst to him, one of his victims (Botet) has secretly moved into his home and is slowly starting to destroy his “perfect” life.

From the opening montage of Hussein getting ready you know there’s something not quite right. Bridges’ uses lots of overhead shots to sweep around the apartment and there is a sense that the audience is a voyeur looking intently at Hussein’s life. As Hussein leaves the flat there is a chilling shot of a slightly open bedroom door, suddenly the intruder’s hand emerges. He is practically naked and spends his time lounging around the flat, repeating the same routine as Hussein, reading the same books until he has to return to his hiding place in the walls. To say that this is a creepy concept is an understatement. The idea that someone is watching you as you go about your personal, private business is disturbing and Freehold plays on this fear to expert effect. Whilst it is implausible that someone could be hiding in your home, there are lots of near misses as the intruder moves his way around the apartment. It’s tense and thrilling.

Javier Botet as the intruder Orlan delivers a highly physical performance. Botet is familiar to some as the titular Mama in Andy Muschietti’s 2013 horror, as well as scaring everyone senseless as The Crooked Man in The Conjuring 2. Botet has Marfan syndrome and his elongated feet and fingers and his slight frame are used to stunning effect. Bridges focuses on the physicality and Botet manoeuvres round the house as if he were a ballet dancer who’s perfected his routine. Whilst this is a taut thriller and at times wretch inducing, there is a lot of dark humour as well. The banter between Hussein and his girlfriend Mel (Dhillon) is believable and entertaining and even when Orlan is committing these atrocious acts, there is a lot of comedy to the performance.

Screenwriters Dom Bridges and Rae Brunton are careful to not reveal the motivations of Orlan’s abuse until quite late in the film. There are small teases throughout and it builds to dramatic effect. Unfortunately the finale is quite lacklustre compared to the tense and engaging first two acts. It feels slightly rushed and anticlimactic, as if the pair had developed this fantastic idea but weren’t sure how to conclude it. It’s a shame as the rest of the film is wonderful and one of the best and most unique thrillers of the year.