Shaun Munro chats with the original Boy Wonder himself, Burt Ward, about his new DC animated film Batman vs. Two-Face… 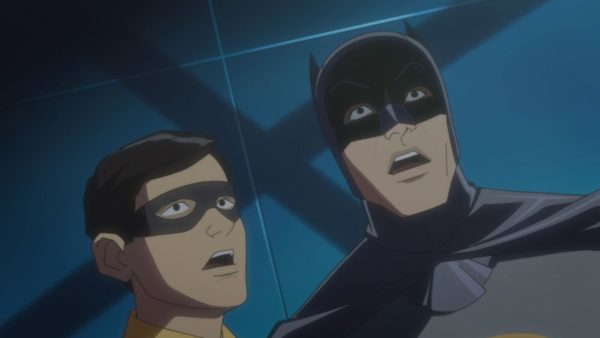 Thank you for taking the time out to speak to me today, and I wanted to start off by asking, what was it that initially attracted you to these new DC animated films, Return of the Caped Crusaders and Batman vs. Two-Face?

The brilliant writing, the brilliant style. Warner Bros. captured everything that was the essence of what we did in 1966, 1967 and 1968, and catapulted it forward into modern times; including references to their Batman movies. The writers, directors and producers who worked on this show were not just people that were hired to just do it, these were intense Batman fans, they grew up watching our show. There are so many references, some subtle, some not so subtle; it’s just brilliant workmanship.

I can only imagine having fans creating the project made it so much easier to reprise the role. Can I ask how did it differ playing Robin in animation compared to live-action?

There are technical aspects, OK, but for me, you have to understand that when I was hired, the producers came to me and said “Burt, we selected you from interviewing more than 1100 young actors, and would you like to know why I picked you?”, and I said yes, and they said “Because in our minds, forgetting television, if there really, for real, was a Robin, we think you, personally, Burt, would be it. So, we don’t want you to quote ‘act’, we want you to be yourself and be enthusiastic”, which is exactly what I did for 120 episodes and all these Batman movies. So when people ask me was it hard to get back to the role, it’s like asking you, Shaun, is it hard to be Shaun?

[laughs] Absolutely not. So, this new series of films coming as they are five decades after the original show, how does it feel that your and Adam West’s work continues to be this generation-spanning phenomenon that people still want to keep seeing more of?

You know what it is? Let me tell you what it at heart is, OK? When we came on in 1966, we did something that no-one in history had ever done, which was we produced a program that was targeted on multiple levels. For children, it was hero-worship, the Batmobile, climbing walls, fighting crime, but for the adults, it was the nostalgia of the comic book, and for an audience that no network could get at that time, which was the teenagers and the college kids, whose attitude was “Why should I watch television? Let me go out and have fun.”

Well, we brought fun to them with the double meaning, the very suggestive dialogue, the inferences that would raise eyebrows. We used to say we put on our tights to put on the world, that we were the only superheroes that wore our underwear on the outside of our clothes.

Yeah, the generational thing is interesting, because I just picked up for the Blu-ray set for my dad who watched it when it originally aired. It’s just a beautiful set with the little toy Batmobile. It’s such a great collection they’ve put together.

They just made it absolutely brilliant. 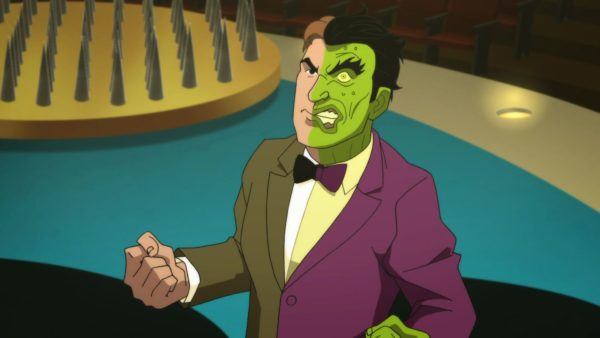 With Adam West’s unfortunate recent passing, could I ask you about the experience of working with him on this final recent film?

Well yes you can, let me just tell you this. Adam and I met 15 minutes before our screen test back in July of 1965. Within five minutes, the two of us were laughing, and we never stopped laughing. I worked with Adam not just on these films, but on the weekends I’d go out, every single weekend, these giant comic-cons. Just six months ago the two of us were in Dallas with an 80,000 paid attendance to come see us. 80,000 people! And a few months before that was Toronto, 160,000 paid attendance.

So I would be working with Adam all the time, we were great friends. I loved this man. We always had such a good time that even during the series, and incredibly long hours as there were, on weekends we would find time every so often to go out and play tennis, and people would be coming to these public tennis courts and they’d look at us and all of a sudden someone would say, “Oh my God! That’s Batman and Robin playing tennis!”

Wow. I’m sure you do this get asked this a lot, but with Adam West’s passing, could you see yourself appearing in other animated DC films without him, say a Nightwing film or even taking up the Batman mantle yourself?

And I don’t know if there’s much you can talk about in that regard. Have there been any discussions about that already?

No, not as of yet, but you know something? I love the character, I have a huge following. I mean, I’ve got a Facebook page with more than 100,000 followers, dedicated Batman fans, and I get these really nice e-mails. The other day somebody wrote to me and he was so tender, the person said, “We’ve lost one of the great legends, but we still have one living left, and that’s you Burt. Carry the mantle forward.” 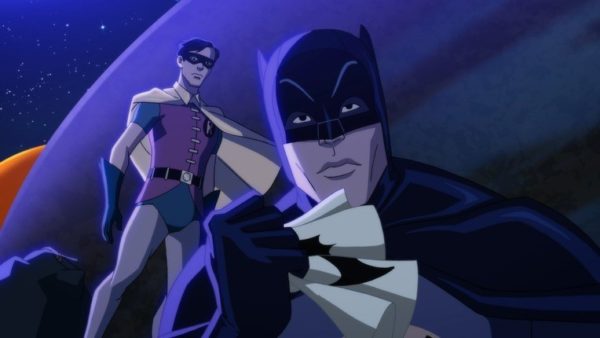 It was touching, it almost brought tears to my eyes. It was really magnificently written and I’ll tell you something, I have a great time, I adore all those people over at Warner Bros. I think they love my work, because for them they can’t believe it, I mean, literally when I was recording this last session, the executive producer interrupted the recording to come out and say, “You know, Burt, we’re all blown away in here. You sound exactly like you sounded fifty years ago. it’s almost scary.”

Oh absolutely yeah, it was fascinating to watch. It retains exactly what you want out of the character.

Right. And as a result of that, I made it evergreen. Have you seen the new film?

Well, did you notice that there’s no ageing in my voice? 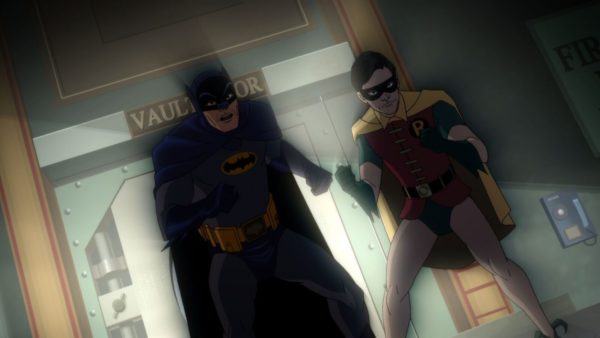 [laughs] Well, one of my favourite parts of the film was William Shatner as Two-Face. What did you think of his work on the film, and how was it collaborating with him on this?

He’s so brilliant. First of all he’s an amazing actor period, but he was so brilliant in this role. Oh my gosh, he did, actually, a dual role; the duality that he portrayed was absolutely amazing, and two weeks ago we premiered this at the New York Comic-Con. At the end of the movie, people stood up and, I’m telling you, I thought they were gonna tear the seats down the reaction was so positive, and out came Shatner and I, and the producer, the director and the writer for a panel, and I sat next to Shatner, and let me tell you, this man is razor-sharp.

He is so quick on his feet, and I didn’t realise that, and I’m pretty quick too, and you put the two of us together, and after about 5 minutes, every answer we had we kinda directed a little zinger over to the other one. The audience went nuts for it, and I like him a lot, my gosh, he is a very funny man. In fact I’ll tell you what he said to me one time. This was at one of the shows when I was telling a story, and he’s just got this sense of humour; he turns to his agent and says “Oh here comes another long story from Burt” [laughs] I mean, this guy is just razor-sharp, and we got along great, just absolutely great, and I loved working with him. I’m telling you, he’s a lot of fun, and I really hope to work with him, whether it’s Batman projects or other projects in the future. I love to work with him, it was a lot of fun.

Yes, it’d be great to see him back in that role in another animated film perhaps. Did you have a personal favourite scene from Batman vs. Two-Face?

Yes, I did and actually it was the scene that was in the trailer, where I’m tied down and Two-Face exposes me to the hideous, you know, evil extractor fumes, which causes me to become evil temporarily myself. And I enjoyed playing the duality of that, I enjoyed the fight stuff I did. 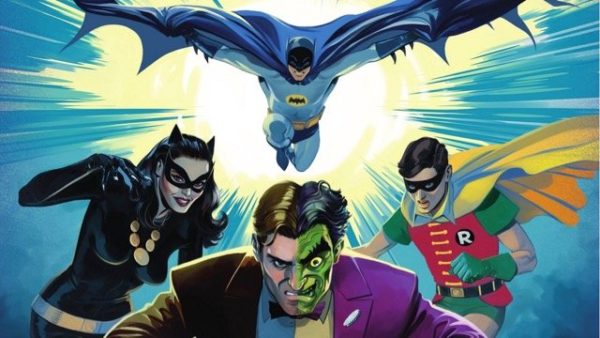 Yeah, the fight against Batman was great.

I really got into it, I’m a martial artist so for me that’s the best part, all the fighting, I love that.

Yes, and with this film being like a combination of the original TV show’s tone and the newer Batman, I wanted to ask your thoughts on how comic book adaptations have changed and grown since the original Batman series?

Well, remember, there’s two answers to that question. First, we took comic books and brought it to life, we took something that was 2D and made it 3D. Second thing is, I think where it is now, you’ve got to understand there’s some Batman 66 comic books featuring Adam and I, drawn exactly like I look, so I think they’ve taken that and made wonderful stuff with it.

Did you know there’s an 11.5 foot-tall One-Armed Bandit [a slot machine] with photos of Adam and I, four photos that are twice life-sized? There’s a new pinball machine which shines the bat signal on your ceiling; I have one of them, with 300 recordings by Adam and 300 recordings by me. You hear our voices in the pinball machine, so I think that what we’ve done has been great for every aspect of merchandising and television.

Absolutely. So that’s all the time we have, but I just wanted to thank you for taking the time to speak to me today, and on a personal note thank you for everything you’ve done for the franchise over the years.

Well I hope to have the pleasure, if I come over there, I’d love to meet you, so for now I say, to the Batmobile!

[Laughs] Thanks very much Burt, it’s been great to speak to you. Take care.

Batman vs. Two-Face – See It Now on Digital Download, Blu-ray™ and DVD.