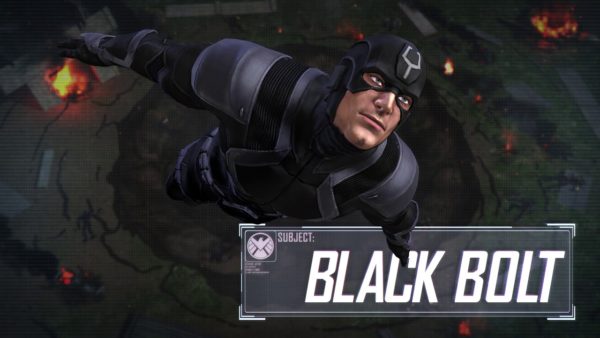 PlayStation 4 and Xbox One welcome Inhuman king Black Bolt to the Marvel Heroes Omega roster, in celebration of the recent Marvel’s Inhumans premiere on ABC. Black Bolt may appear as the ‘strong, silent type’ to his allies, but he has some strong words in his arsenal – thanks to his electron-harnessing abilities, which create devastating shockwaves with his vocal chords: “His Ultimate is called ‘Royal Decree,’ and it’s quite a thing to behold,” says Gilbert. “Black Bolt unleashes the full potential of his voice in a reality-rending yell, that instantly vaporizes non-boss enemies and decimates everything else. Black Bolt is a unique blend of a ranged energy blaster and a mobile scrapper—with spectacular visuals fit for a king!”

“He’s a great choice for beginners to Marvel Heroes Omega and veterans alike,” says Gazillion Senior Designer Ben Gilbert, who helped develop the character’s in-game abilities. “I personally prefer to focus on melee, using the Master Blow talent to swap out his Signature for a heavy-hitting melee one. At the same time, my fellow designer Brian Waggoner prefers his ranged build, blasting enemies to smithereens from afar, occasionally using the slightest whisper to annihilate entire groups.”

Enjoying Marvel’s Inhumans? A costume inspired by the series is available for Black Bolt, alongside his classic and modern comics appearance!

Marvel Heroes Omega combines the core gameplay of action-RPGs and MMOs with an expansive library of heroes from the Marvel Universe. Take on the role of your favorite characters, including Spider-Man, the Avengers, the Defenders, the Inhumans, the X-Men, the Guardians of the Galaxy, and more!