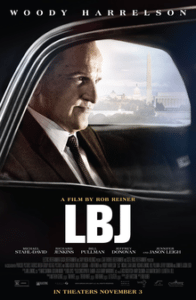 The story of U.S. President Lyndon Baines Johnson from his young days in West Texas to the White House. 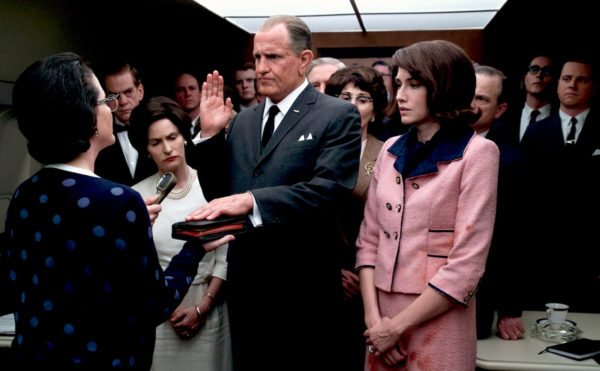 Not many will debate against that Woody Harrelson is one of the greatest actors of his time (this year alone he has appeared in a wide variety of films and given a pair of incredible performances in War for the Planet of the Apes and Three Billboards Outside Ebbing, Missouri), but his portrayal of Texan Lyndon B. Johnson in the biopic about the polarizing political figure simply titled LBJ (directed by Rob Reiner of A Few Good Men fame among other widely regarded classics) is a mixed bag.

Woody Harrelson certainly looks the part thanks to accomplished makeup effects (save for revealing close-up shots), but it’s distracting hearing the sardonic insults coming from a voice that is distinctly Woody Harrelson’s. It doesn’t help that Rob Reiner’s approach to the material for the first half of the film’s duration plays out political differences, specifically with the Kennedy family, mostly for laughs; in the end I honestly can’t say it even feels like watching a convincing depiction of the historical figure, but rather “Vice President Woody Harrelson”. LBJ is some bizarre alternate timeline where Woody Harrelson was once President of the United States of America.

The story itself has awkward structuring, jumping back and forth through time seemingly without rhyme or reason. Jarringly, LBJ occasionally drops whatever dilemma Johnson is going through as John F. Kennedy’s second-in-command cutting to a piece of the infamous and tragic assassination. Furthermore, why do we need to see Kennedy’s death again in film, presented the same exact way stylistically as so many other pictures have done before this, in a movie that isn’t even centered on the beloved Democrat? Sure, it’s to bridge a connection and unity between their opposing viewpoints so that Lyndon B. Johnson’s staunch pushing of the Civil Rights Act feels in character for someone that previously toed the line of racism (he has a friendly association with an openly bigoted US Senator played by Richard Jenkins in a subplot without much engaging drama or consequence), but it also isn’t a good enough defense for formulaic and conventional filmmaking.

Instead of functioning as a one-liner feeding machine for Woody Harrelson (admittedly, some of his moments of outrage come with hilarious lines of dialogue), LBJ also could have deeper explored the relations between its supporting cast. Johnson’s supportive wife is played by the always excellent Jennifer Jason Leigh, but that’s her sole purpose in the film; she’s a character as dry as paint. Then there’s the constant butting of heads with Bobby Kennedy which doesn’t feel real or natural, even after the murder of his brother John. Roughly 30 seconds of the movie goes to explaining why Bobby has such a disdain for Lyndon, and that’s it. Oddly enough, the only character representation that actually works is Jeffrey Donovan’s John F. Kennedy; he looks and sounds like him, and also contains a sense of depth. 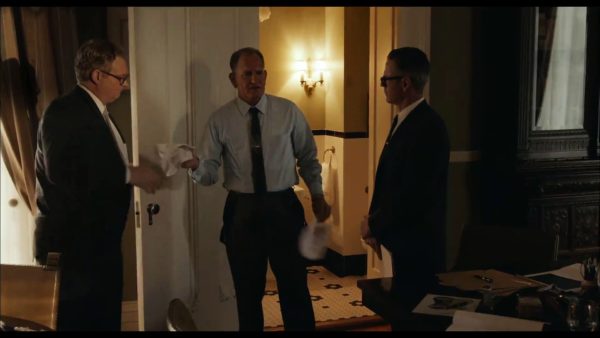 There needs to be more material that dives into Lyndon B. Johnson’s moral and ethical codes. When the film isn’t cracking jokes the film explores Johnson’s desire to be liked by the public and fears of rejection but doesn’t go far enough to ensure compelling results. Coupled with amusing bits of Johnson relaying important information over the seat of his own toilet (something he was actually known for doing), there is the sense that Rob Reiner understands the subject he is tackling, yet chooses to settle for something safe and boring. Last year’s Jackie was a psychologically devastating look at the widowed Jackie Kennedy boasting one of the absolute best performances of the year by Natalie Portman, whereas in comparison LBJ is a film that will be thrown on in American History classes only for teenagers to fall asleep. History can, and should, be fun, not lifeless retellings of basic information.

For what it’s worth, amid trying to distribute equal screen time to both Lyndon B. Johnson and John F. Kennedy, the script and direction does find a solid focus by always keeping the Civil Rights Act at the center of the discussion between various characters. LBJ isn’t necessarily a failure on a narrative level, more so at adding depth and humanity to the historical figures. It’s also hard to shake that lingering feeling that as charismatic an actor as Woody Harrelson is, he is miscast in the role. Viewers will get a laugh here and there and might even learn a thing or two, but LBJ is a biopic that should be skipped.