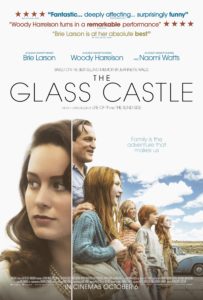 A successful New York gossip columnist believes she has left her impoverished and difficult childhood behind her – until one night she encounters her now homeless father.  It brings back memories of her earlier years and raises the possibility of letting her parents back into her life.

Is The Glass Castle this year’s Captain Fantastic?  Superficially, it could be seen that way.  Both have unconventional, unorthodox fathers bringing up a brood of children but, once you get past that, the similarities drop away.  Captain Fantastic showed an idealistic and intelligent father whose efforts at raising his children were unusual and sometimes misguided.  But there was never any doubt about his devotion to the children.  The father in The Glass Castle is a very different proposition.

The initial premise – the almost hippy-like parents moving from one state to another  – seems charming and, indeed, so does the father Rex (Woody Harrelson). It seems to be a great life for him, wife Rose Mary (Naomi Watts) and, most of all, their children.  One big adventure, right?  Wrong.  There are times when the kids go without food for days, they don’t go to school, because their father doesn’t hold with it and they have to witness his alcoholism, his outbursts of anger and the vicious arguments that go with it.  Jeannette (played as an adult by Brie Larson) nearly drowns thanks to her father’s brutal attempts to teach her to swim.  And they have no real stability in terms of a home – which is why the adult Jeannette’s belongings are still in boxes, even though she’s been living with her fiancée for months.

Yet Jeannette is a daddy’s girl.  She adores her father, so she’s the one who really buys into his dreams, including the Glass Castle of the title, and his constant promises of a better tomorrow.  A more charitable description is that they’re a distraction from poverty, but the truth is that he can’t distinguish dreams from reality and prefers to live in that comforting dream world.  All those promises never come to anything.  When he and the family move to a ramshackle house where he says he’s going to build the glass castle, he digs a deep pit at the front of the house, presumably for the foundations.  Except that it ends up being filled with rubbish.

The story, which revolves around Jeannette, is told in a series of flashbacks and flash forwards.  There’s a strong sense, though, that the scenes in the past could have been given less prominence, making way for more emphasis on her current life to show how her past had affected her.  As it stands, it makes for an unbalanced film and one that is a good half an hour too long.

Even more worrying is the descent into schmaltz in the second half, despite the father’s behaviour and the mother’s inability to intervene, apart from the occasional reproach from the side lines.  Admittedly, this is based on true story and the message is all about unconditional love.  But can the children be quite so forgiving?  The syrupy tone towards the end of the film is overpoweringly sickly, with Jeanette, her mother and her siblings all reminiscing about the father as if he were some kind of saint.  The damage he inflicted on them seems to have been forgotten and now he’s dear old dad.  It’s hard to believe that the film comes from director Destin Daniel Crettin, whose previous feature was Short Term 12, which also starred a rising star called Brie Larson.

Some of the emotional honesty he showed in that wouldn’t have gone amiss here.  The film sorely needs it.  That’s not to say it’s unwatchable.  Brie Larson and Woody Harrelson – almost omnipresent on the big screen this year thanks to Wilson, War for the Planet of the Apes and the forthcoming Three Billboards Outside Ebbing, Missouri – are both in fine form as father and grown up daughter and the younger children are impressive as well.  But it isn’t enough.  That mawkish ending means this is a film that’s not just inconsistent to the point of incomprehensible, but any emotional intelligence has gone straight out of the window and it really dodges the issue at its heart.  Not unconditional love, but the responsibility that goes with being a parent.