The Meyerowitz Stories (New and Selected), 2017. 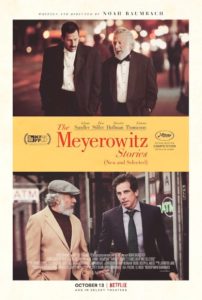 An estranged family gathers together in New York for an event celebrating the artistic work of their father. 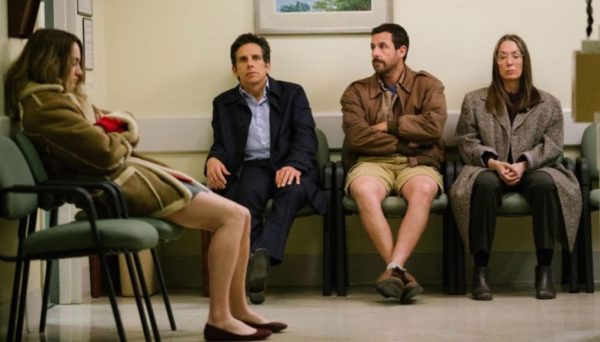 Writer and director Noah Baumbach (Mistress America, Frances Ha) is without question one of the most gifted comedic/ dysfunctional family filmmakers working today, so it’s a godsend that he takes actors of exhaustedly lowbrow routines (Adam Sandler who has been slumming it up on the Netflix scene thanks to an overly lucrative financial deal that allows him to pump out garbage like The Ridiculous Six on the regular, or Ben Stiller who seems to be content reviving franchises of which no one asked for a sequel to *cough* Zoolander 2) and illuminates their widely beloved mainstream proficient qualities to reveal a work of relatable human depth.

In The Meyerowitz Stories (New and Selected) Adam Sandler is present once again as an underachiever prone to outbursts of childish anger and behavior, with the spin that Danny Meyerowitz also is a victim of neglectful parenting and other unfortunate circumstances. Although his career as a musician never got off the ground due to his familial role as a homestuck father, he can proudly say that his abundance of one-on-one time with daughter Eliza (Grace Van Patten in an impressionable outing from a relatively fresh performer) is raised correctly with upstanding morals and college-minded filmmaker ambitions. With Eliza set to embark on a new journey alone, the divorce from her mother (the character is never actually seen in the movie) is official, leaving Danny stuck in a midlife crisis along with money problems, simultaneously living at home and trying to reconnect with his father Harold (Dustin Hoffman, another remarkable actor in his best role of the decade), a frustrated and low-key famous sculptor, possibly unable to obtain true fame because his art is not as good as he thinks or certain family members around him claim.

Much of the first chapter (the film is broken up into five different chapters highlighting specific key memories in the family that seemingly all take place within a year) is centered on Danny, who still is frequently ignored and brushed aside by his father in favor of his successful business advising brother Matthew (Ben Stiller, a frequent collaborator of Noah Baumbach who always delivers excellent turns in his pictures), but given strong material that plays to his strengths. Harkening back to his Saturday Night Live days, Sandler is graced with multiple opportunities to play melodic piano tunes (with the assistance of veteran composer Randy Newman, who also provides a whimsical score that wonderfully compliments the perpetual offbeat and humorous family drama), including one with Grace Van Patten that poetically establishes this man as good-hearted despite some flaws. Truthfully, many of the funniest and most emotional moments come from Adam Sandler singing and gently pressing piano keys.

As Matthew is blessed with a day in his hectic work schedule that sees him back in his hometown of Manhattan (the job calls for him to travel so much, he neglects his family in a different way than Harold ever did), he too attempts at obtaining common ground with his father. Naturally, it doesn’t go very well. Instead, the two end up in an argument that sums up the complexity of Harold’s character more than words I type ever could, describing him as not caring about his wealthy successes but also finding obsession in it. Matthew is the chosen favorite child of Harold (a plethora of failed marriages are referenced) except he only shows his affection to everyone else in the family. It’s a dynamic that pays off, occasionally splitting up the brothers but also reuniting them. 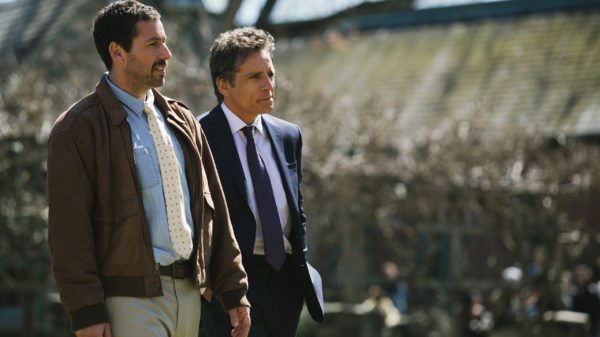 The Meyerowitz Stories (New and Selected) is a collection of short tales that grant the estranged family a chance at healing. Making amends isn’t always easy (this film is about the closest we will ever get to a Celebrity Deathmatch between Adam Sandler and Ben Stiller), unfortunately requiring a little tragedy in the process. The brothers from different mothers also have a sister named Jean (Elizabeth Marvel, socially awkward and bug-eyed, perfectly landing dry witty dialogue like she’s a Coen Brothers concoction) who isn’t given anywhere near equal screen time or her own chapter (technically, this part isn’t true but the portion dedicated to her is over rather quick), yet she still manages to maintain a sense of importance. Neglected so much, (by extension Noah Baumbach’s seems to intentionally give her few lines of dialogue), every sentence sends a profound message. When asked why she continues to show up to family gatherings considering Harold unquestionably treated her the worst out of the three siblings, she replies something to the effect of “Because I’m a decent human being”. Family is family, even through thick and thin, and if you don’t believe that, The Meyerowitz Stories (New and Selected) will certainly have audiences reassessing their stances.

Lots of laughs are to be had (Dustin Hoffman is having a blast in this role, playing up the stubborn curmudgeon as a handful of elderly insanity with a personality too intellectual for his own good), but the film also has something vital to say about each depicted generation’s passion for art. As previously mentioned, Eliza is enrolling into filmmaking classes, putting together truly bizarre softcore pornographic shorts that explore sexuality in campy, badly acted fashion. Whether audiences find the reoccurring joke funny or not is up in the air, but it’s alarming that various family members majorly support the content. The provocative and taboo shorts oddly don’t even feel in character for Eliza, although the plot device does work as a method of implying that the artistically minded Meyerowitz family is doomed to never truly be celebrated. In addition to operating as a broken home forgiving one another, the film greatly explores finding the balance between artistic work and tending to family needs.

Again, there are also numerous segments of screwball hilarity that will have viewers cracking the hell up (the brothers are not very skilled at vandalizing vehicles), and the rapidly fired sharp dialogue from Noah Baumbach’s script is so assaulting it will most likely take two watches to fully appreciate the comedy. However, the ending is disjointed, lacking any clear direction (short scene after short scene fades to black until the credits roll) and I don’t mean in a freewheeling fun way. There are also a few underdeveloped characters here and there.

Outside of that, The Meyerowitz Stories (New and Selected) is Noah Baumbach continuing to provide authentic portraits of upper-class dysfunctional families, only this time he has unleashed three career-best performances (Adam Sandler, Ben Stiller, and Dustin Hoffman) along with a radiant one from Grace Van Patten that should absolutely nail her more work. It’s not Baumbach’sstrongest work, although to be fair, it is one extremely difficult filmography to rank. Hey, any film that manages to, at the flick of a switch, transform Adam Sandler into the Oscar-worthy actor he is capable of being is worth checking out.