For almost forty years, Star Wars fans have debated the meaning behind Darth Vader’s “no disintegrations” line to Boba Fett in Star Wars: Episode V – The Empire Strikes Back. 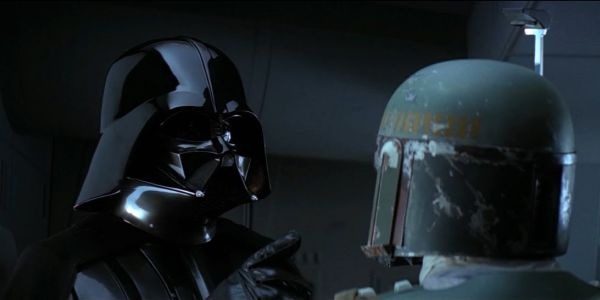 Well, thanks to a story in the new anthology book Star Wars: From A Certain Point of View, we now have our in-canon answer – and no, it’s not because the bounty hunter was responsible for the deaths of Owen and Beru Lars on Tatooine in A New Hope.

The Paul Dini-penned tale ‘Added Muscle’ explores Fett’s appearance in Mos Eisley in the Special Edition cut of A New Hope, during which the bounty hunter reveals that he’s on Tatooine as he’s been on the hunt for R2-D2 and C-3PO at the behest of the Dark Lord of the Sith.

Originally, I wasn’t supposed to be a part of this. That’s what I get, I guess, sticking around Tatooine to snag some Imperial coin. I was supposed to be off this dust ball yesterday, but I picked up trooper buzz that Vader was looking for a couple of runaway droids. Figured I’d collect the bounty and square myself with the headman at the same time. He’s still got a mad on over those rebel spies I crisped on Coruscant. Idiots came at me with ion disruptors. What, they thought I wouldn’t carry a weapon accelerator? Flash, boom, three tiny ash piles. Tried to collect and Lord “No Disintegrations!” refused to pay without bodies. My word’s not good enough, apparently. Reckoned I’d make up the loss by finding his droids and holding out for twice the reward.

No go on that. Trailed one until its footprints were wiped out by a Jawa sandcrawler. Followed those treads a way until I found someone had wiped out the Jawas, too. “Someone” meaning amateurs trying to fake a Tusken raid. Probably stormtroopers, judging by the random blast shots. Some might call them precise. Me, I say they can’t hit the butt end of a bantha. At least they had brains enough to take out ev­eryone who had seen the droids. Hard luck on the sizzled hicks I found at that torched moisture farm. Had a look-see and discovered there were three settlers living there, not two. Betting the third ran with the droids. I’ll hunt around after I’m done here. Vader may triple the bounty if I bring him the fugitive along with the droids. Yeah, I know, intact corpse, “no disintegrations.”

So there you have it. And while Boba Fett wasn’t responsible for the deaths of Owen and Beru, it seems he would have been, had he not been beaten to it by Imperial Stormtroopers.