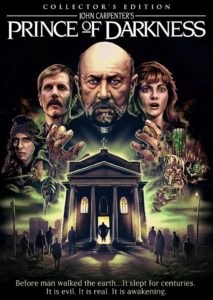 A group of university students are recruited by their professor and a local priest to solve the mystery regarding the nature of a large container with a mysterious green fluid within it. Unbeknownst to the students, the fluid is not only a living organism growing at a terrifying rate, but its evil plans could very well spell the end of not just the students, but the end of humanity itself. John Carpenter is one of the most beloved and well-known directors in horror history, having created several of what many critics and fans consider to be the greatest and, in some cases, most important horror films of all time.

Earlier this month I looked at his brilliant 1982 masterpiece The Thing (which you can read here) a film which marked the beginning Carpenter’s unofficial “Apocalypse Trilogy”, a series of thematically linked films each dealing with a different scenario that could very well mean the end of the world as we know it.

So having looked at the first one it only makes sense that in today’s review we return to Carpenter with a look at the trilogy’s second installment, the utterly brilliant 1987 sci-fi supernatural horror Prince of Darkness.

The thing that makes Prince of Darkness so effective as a horror film, and a genuinely scary one at that, is not its gruesome special effects, its jump scares or even the creepy appearance of Alice Cooper (yes that Alice Cooper). What makes the film so scary are its atmosphere, its story and the ideas it discusses.

The mysterious green fluid that serves as the films primary plot device really shouldn’t seem that scary to begin with, it’s just basically a big jar of goo swirling around. However, Carpenter’s masterful direction creates a truly terrifying presence that is drenched in foreboding and dread successfully making what should be a rather daft idea of a demonic jar of goo into what truly feels like evil distilled in its purest form and that its continued existence truly spells doom for all humanity. 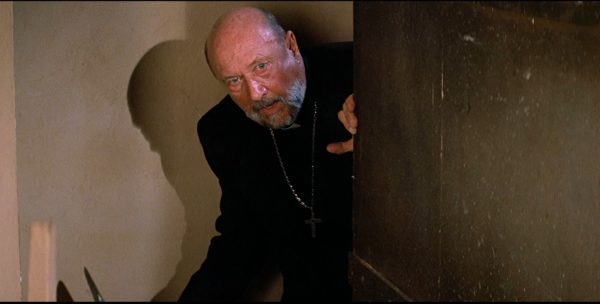 The terror only builds as the green fluid begins to spread itself amongst the students, turning them into strange zombie-like creatures in the process. Some of these possessed people offer some of the scariest moments of the film, such as one who sings the most chilling version of “Amazing Grace” I’ve ever heard, before cutting his own throat. While another ominously says while his body dissolves into a pile of bugs, “I’ve got a message for you and you’re not going to like it. Pray for death.”

My personal favourite moment of the film, as well as possibly the scariest in my view, comes when a possessed woman types into a computer the words “I LIVE” over and over until the screen is overflowing with it, before typing the following phrases; “You will not be saved by the holy ghost. You will not be saved by the God Plutonium. In fact, YOU WILL NOT BE SAVED!”. It’s a simple moment that I feel conveys the apocalyptic nature of the threat faced by the protagonists, with the demonic force demonstrating that it is utterly unstoppable. Also, it’s fucking terrifying.

The climax of the film is also one of the most intense that I’ve ever seen in a horror film, with it being one filled with action, suspense, and terror. No small feat considering that the climax it revolves around a mirror that just needs to be smashed to save the world.

The story itself is a fascinating one offering what, I think, is a rarity in supernatural horror – a partnership between science and religion, with the Catholic Church calling in a team of scientists to help it combat an evil that it doesn’t fully understand. Normally when horror films attempt to offer a scientific explanation for what should be a supernatural phenomenon, they will devolve into the usual “skepticism vs faith” formula, with faith normally winning out because of God and such.

However, with this film, Carpenter dabbles with ideas surrounding theoretical physics, languages, atomic equations, subatomic particles and mathematics as our heroes try to work out scientifically what evil plans the green fluid has in store, with the dialogue between the characters concerning some of these ideas sounding authentic and believable. The conversation between Victor Wong’s atheistic sceptic and Donald Pleasance’s priest (both of whom give the best performances of the film) is perhaps the finest example of this melding of the ideas surrounding science and religion, with Wong suggesting that the ideas proposed by religion are in fact real, but just that people didn’t possess the necessary knowledge or technology to prove it at the time.

It’s also in this scene that Wong proposes a terrifying idea; the suggestion that Satan is in fact not the great evil of the universe, but that he is merely the “son” of it, with Wong proposing instead that there exists an “Anti-God” whose mission is to spread darkness across the universe. Quite simply the film demonstrates horror at its most intelligent and thoughtful.

The music composed by John Carpenter himself in collaboration with Alan Howarth is probably one of the most familiar and cited horror scores of the 1980s. The main theme that plays throughout the film is one of my favourite of horror themes, with it capable of making anything and everything look ominous.

on’t believe me, just watch Adam Curtis’s controversial series The Power of Nightmares which uses of this film’s theme making even the most boring of footage seem like the scariest thing in the world.

With a terrifying apocalyptic story, an overpowering sense of foreboding and dread and some of the most intelligent writing that you’re ever likely to find in any horror film, Prince of Darkness is simply one of John Carpenter’s best films and quite possibly one of the greatest (and certainly most underrated) horror films of the 1980s, if not of all time. Watch it or pray for death.

And before you ask, yes, I will be looking at the third and final installment of Carpenter’s “Apocalypse” trilogy later this month. However, before we can look at it I need you to answer a very important question; Do you read Sutter Cane?