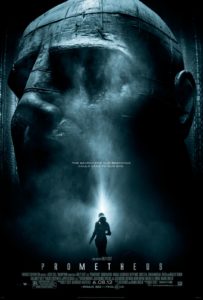 The research vessel Prometheus carries a team of scientists to a mysterious planet on a mission to uncover the secrets regarding the origins of the human race. Far from meeting their makers, the scientists instead uncover a centuries-old plot that if successful could lead to the extinction of humanity.

After four films following the character of Ripley and two abysmal crossovers with the Predator franchise, the Alien franchise had seemingly run out of steam and looked like it would finally enter retirement.

However, some disagreed and none more so than director Ridley Scott, who owes his very career to the original 1979 film that catapulted him to fame, and felt that there was still life (and money) to be wrung from the series. Jump forward to 2012 as Ridley Scott returned to the franchise he helped to create with his highly divisive quasi-prequel Prometheus.

Noomi Rapace makes a for a fine – if slightly less memorable – Ripley replacement as Dr Elizabeth Shaw, with Rapace doing a fine job at making the character of Shaw an engaging and sympathetic one, in particular in portraying the inner conflict between her religious faith about a divine creator and her scientific curiosity to determine who that creator might be.

Rapace also gets points from me for managing to pull off a fairly convincing English accent, although her natural Swedish accent does occasionally creep into earshot in some moments; otherwise it’s an impressive effort at mastering an accent that has a long and hilarious history of being butchered by American actors.

The real star of the film, of course, is Michael Fassbender as David, the ship’s android who seems to have an all too eager interest in the gooey goings on of the mysterious planet being explored. Fassbender’s David is easily the best character in the whole film, with his performance being full of a charming malice. There is just something about the way he talks in that charming yet chilling accent that makes the hairs on your arms stand up. 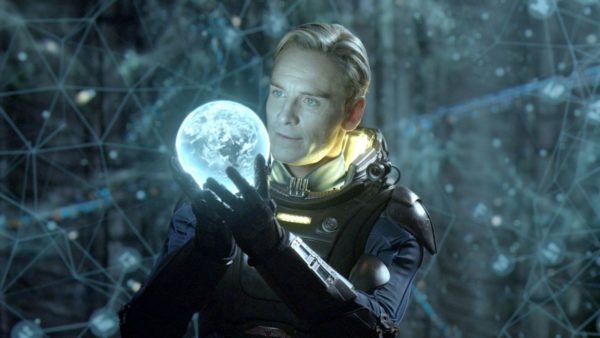 While Fassbender and Rapace both manage to give good performances and are successful in creating characters that are somewhat memorable, the same can’t exactly be said for the rest of the cast.

Now don’t get me wrong, for the most part, the supporting cast does well with the material they’re given, but aside from maybe Charlize Theron’s Vickers or Guy Pearce’s Mr. Burns – I mean Weyland – you’ll find yourself struggling to remember who anyone is.

With the original Alien, the cast was small enough so that you could know who was who: Dallas was the leader, Ripley was the “by the book” officer, Brett was the wise-ass, Jonsey was a cat and so on. The fact that we could remember who they were meant that when the titular alien killed them their death had some meaning to it because we had got to know them in the hour or so before.

With Prometheus though, we just don’t really know much about the crew and we don’t get enough time to get to know them well enough, which undermines the impact of their eventual deaths, because why should you care about the death of a character whose name you can’t remember?

The visuals of the film are spectacular, and regardless of what one may think of Ridley Scott’s more recent directorial work, you can’t deny that he doesn’t have a great eye for creating some stunning shots. I especially love the opening aerial shots of a pre-human Earth, with the beautiful scenery of Iceland (where it was shot) looking truly otherworldly.

The production design which makes heavy use of intricate sets and real locations are also on top form, particularly what I dub the “Kurtz monument”, a dark room that looks more than a little like a certain egg filled spaceship, albeit with a giant bald head slap bang in the middle of the room, with it being full of spooky little nods to the original film. 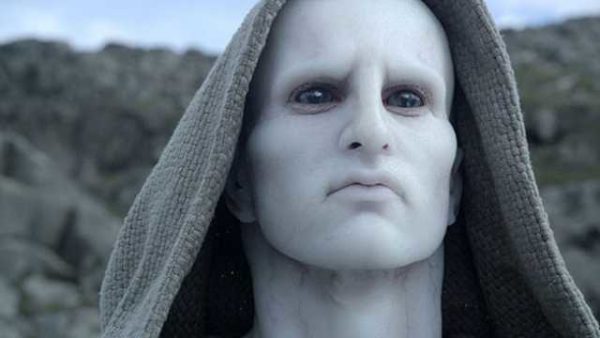 Despite being marketed as a prequel to Alien, (the film’s teaser trailer even recycles the music from the teaser for the original film) Prometheus very much tries to be its own thing with its own themes and ideas.

The core theme of the film is the search for the answer to one of the oldest questions in human history. Humanity has longed to find out who or what made and why. And if we found our makers how would they view us, with pride and compassion or with hatred and disappointment.

For what is essentially a big budget sci-fi horror blockbuster, these are incredibly complex ideas that the film valiantly attacks, with a particular conversation between David and Shaw’s skeptic boyfriend Holloway offering a fascinating if all too brief debate around these questions.

The character of David himself can arguably be seen as a physical embodiment of some these themes – he is, after all, a creation made in man’s image. Yet he seems, based on his actions, to have a desire to destroy the humans who made him. He has met his makers and he doesn’t seem too impressed.

This theme is also somewhat mirrored by the actions of the “Engineers” (aka the Space Jockey from the original film), the race of giant aliens revealed as the creators of humanity. Yet, much like David, they are determined to destroy their creations for reasons not explored. In short, humanity’s “makers” don’t seem too impressed with us either.

Although, despite its valiant efforts, I feel that at times the film’s attempts to tackle these themes often slow it down. Prometheus wants to be a sci-fi horror blockbuster and a deep philosophical examination of life and creation, but it really doesn’t work as either. 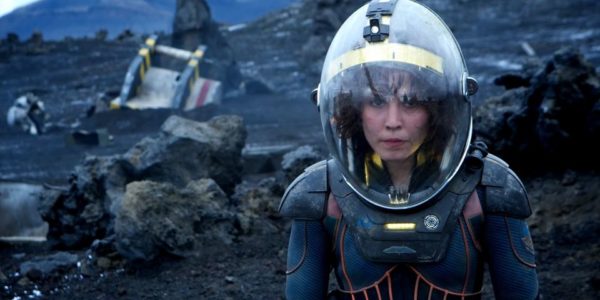 The pacing is often sluggish at times, often rendering the film downright boring, and the attempts to inject action and suspense into proceedings feel less like an attempt at adding excitement, but more like Ridley Scott is hitting you with a stick to stop you from falling asleep.

Whereas I loved the original films that came before it, with even the less than spectacular Alien 3 and Alien: Resurrection still being enjoyable watches in their own right, I can’t find myself feeling the same about Prometheus. The best way I can describe my feelings towards the film is to say that I feel a sense of overwhelming indifference about it.

The acting is solid, the visuals stunning and the themes fascinating, but the sluggish pace and rather questionable nature of some plot points leave the film lacking much to love. Prometheus is not an outright terrible film by any stretch, but it’s not exactly a great film either. It’s just wasted potential.

Prometheus is a film that viewers are likely to love or hate and really I can only recommend this on if you’re a die-hard Alien fan like me. Overall, a decent but very disappointing movie.