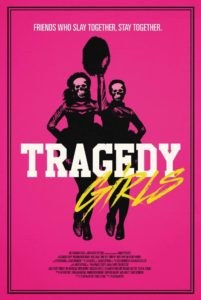 Tragedy Girls, a twist on the slasher genre following two death-obsessed teenage girls who use their online show about real-life tragedies to send their small mid-western town into a frenzy and cement their legacy as modern horror legends. Nostalgia acts are currently a hotter commodity than ever (judging from the record-breaking territory It continues to chart every passing day subsequently causing the out of left field announcement that Jamie Lee Curtis would be reprising her apotheosized role as Laurie Strode in the upcoming Halloween reboot/sequel), but Tragedy Girls is more fascinated in flipping the slasher genre upside down while lovingly paying homage to a plethora of classic franchises (the early sight of a masked machete-wielding homicidal maniac stalking his prey stomping through the forest evokes imagery of Jason Voorhees) and delivering a scathing bashing on the utter vanity of social media superstardom. It’s a love letter to the subgenre of crazed serial killers with its own stamp.

Coupled with electrically and vain, sociopathic performances from Brianna Hildebrand (by now the general populace knows her as Negasonic Teenage Warhead from Deadpool, but her work outside that is even more impressive; she’s a rising star) and Alexandra Shipp (the new X-Men incarnation of Storm) elevated by winning chemistry authentically and hilariously depicting shallow high-school personas, well, director Tyler MacIntyre has a delightfully warped rousing success of midnight madness. Childhood best friends Sadie and McKayla are in their world where prom and boyfriends are life, but also lead a disturbing double life founded on a desperate desire for Internet fame (aka Twitter and Instagram followers, along with their Internet show), where they masquerade as serial killers to get the juicy news first. Even more twisted, the BFFs have kidnapped and tied up the town’s actual murderous psychopath (an unintelligible speaking Kevin Durand mugging for the camera with animated expressions). However, frustrations for the demented girls arise as their numerous killings are declared accidents and overlooked by a comically clueless police department. A good portion of Tragedy Girls is simply the question of who will die next and how, although in context it comes across souring. There’s a quick cutaway segment highlighting the notoriety of infamous mass murderers and, not just because this review is being written after the worst mass shooting in history, but all of the far too regular acts of senseless violence and terrorism, make the material occasionally misguided and tough to swallow. Generally, the ickiness is cleansed by the forward momentum of the film; it never lets up and zips along at the pace McKayla and Sadie spit out dialogue.

The kills are also all over-the-top violent featuring blood spraying from every direction, severed limbs, bodies ground up for disposable purposes, impales, all as graphically possible. It’s more of a compensation for the deaths, outside of one in particular that actually prompts the duo to namedrop Final Destination, playing out in largely unoriginal fashion. Still, the sickening quest for fame laced with dark comedy (ex-boyfriends are laid to rest with absolutely ridiculous final words) never once ceases to be engaging, especially when the predictable but amusing rift in friendship appears. There is a reveal in the final act that is too silly, even for Tragedy Girls, but on the whole, it’s a refreshing spin on the slasher proceedings. It’s also an exploration of ‘best friends until the end’ as much as it is social media blasting, and miraculously the annoyingly bratty pair are easy enough to like in a fucked up way. Most films would crash and burn into extreme irritation, but the script is aware to not take anything seriously. Again, the acting is also a major factor (complete with welcome bit part performances from notable names such as Craig Robinson and Josh Hutcherson), roping us into the chaos. Unfortunately, all of the characters could use more development including some thinly sketched relationships and unclear motives, but it’s mitigated by freewheeling excitement.

Tragedy Girls doesn’t necessarily say anything new, but it feels new placed inside the slasher genre with on-key execution. Social media sycophancy isn’t exactly high-hanging fruit. Despite that, I would totally line up for a sequel; it needs to happen. Tragedy Girls is essentially Scream 4, but instead of insultingly stupid it’s relentlessly fun with sharp insight.