When he was first introduced in Grant Morrison’s epic run on Batman, many people didn’t like Damian Wayne and felt he was a spoiled, annoying, ungrateful little brat. Over time he became a fan-favourite character and developed into quite an interesting and even sympathetic Robin. One of the highlights of Damian’s time in comics hasn’t come from Morrison, though, but from writer Peter J. Tomasi and his frequent collaborator artist Patrick Gleason. DC’s newest omnibus collection, Batman and Robin by Peter J. Tomasi and Patrick Gleason, collects the entirety of their run in one hefty, glorious book.

Their run shone a light on Batman’s growing role as a father to young Damian, trying to veer him away from his darker instincts after being raised by Talia al Ghul and the League of Assassins for the majority of his life thus far. Tomasi really made Damian a likeable, sympathetic and even relatable character that was simultaneously fascinated by his father’s abilities yet also still arrogant enough to think he was better than most of Batman’s other allies.

Damian became quite a human character through Tomasi’s writing and has proven to be one of the best additions to the Batman mythos in recent years. Tomasi writes an endearing take on the relationship between him and Batman, showing its not easy for either of them to adjust in their roles. While Batman has been a father figure to Dick Grayson, Jason Todd and Tim Drake, it takes on a whole new meaning to be a literal father while Damian never had a caring or concerned parental figure growing up. Seeing their relationship evolve is a great emotional investment.

Of course, one of the big stories during Tomasi and Gleason’s run is the loss of Damian. Somewhat hijacked in the final issues of Morrison’s Batman, Incorporated, the finale of his long Batman story, Damian died fighting against his mother. Because of that, there’s a large chunk of the omnibus where Damian is absent. Ironically, this is a point where Tomasi does some of his best work, showing the grief Batman suffers through as a father. Batman #18 is a seminal chapter in their run that has no dialogue whatsoever, instead relaying Bruce’s profound loss strictly through Gleason’s visuals. The story does lose a bit of its quality once it gets more into Damian’s absence, showing a team-up between Batman and Two-Face for a few issues, but gets back on track once Bruce becomes determined to reclaim Damian’s stolen corpse and bring back his son from Ra’s al Ghul. Though ‘Born to Kill’ and ‘Requiem for Damian’ are the best stories featured in the book. 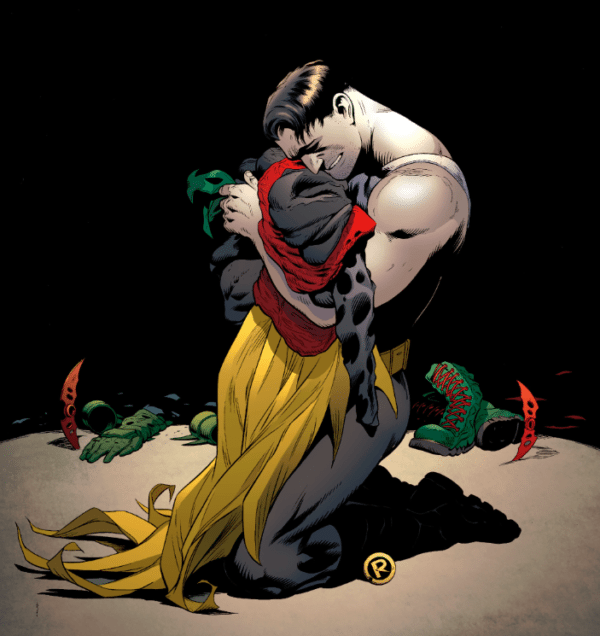 Gleason’s artwork throughout the run is great. His style is a little more cartoonish, but the style fits within the stories they’re telling. There’s some great images here, particularly in ‘Born to Kill’ and Gleason makes some very terrifying visuals of The Joker in the ‘Death of the Family’ crossover, showing a new take on Robin and Joker’s relationship here. The highlight of Gleason’s artwork comes again from ‘Requiem for Damian’, showing all of the loss and pain Batman, Alfred and the other characters are experiencing throughout the story.

One of the best things about this book is that it doesn’t just collect all of Tomasi and Gleason’s New 52 run, but their brief story on the title’s first volume just before the reboot. While its technically out of the New 52’s canon, its very nice to have their completed works in one book. The omnibus doesn’t contain much in the way of bonus content, only a few cover images as well as the script for Batman #18, but when the book comes in a whopping 1,248 pages, anymore bonus content is just going to make the book even heftier than it already is. The quality of the book’s stories far outweighs the lack on bonus content.

Any fan of Tomasi and Gleason will enjoy the Batman and Robin omnibus. The stories are character driven, full of heart and have very nice artwork. Its a hefty book that fans will enjoy, even if the story drags a bit during Damian’s absence, but Tomasi explores the loss with a great examination of Bruce’s role as a father very well. Any hardcore fan will really enjoy this omnibus collection.