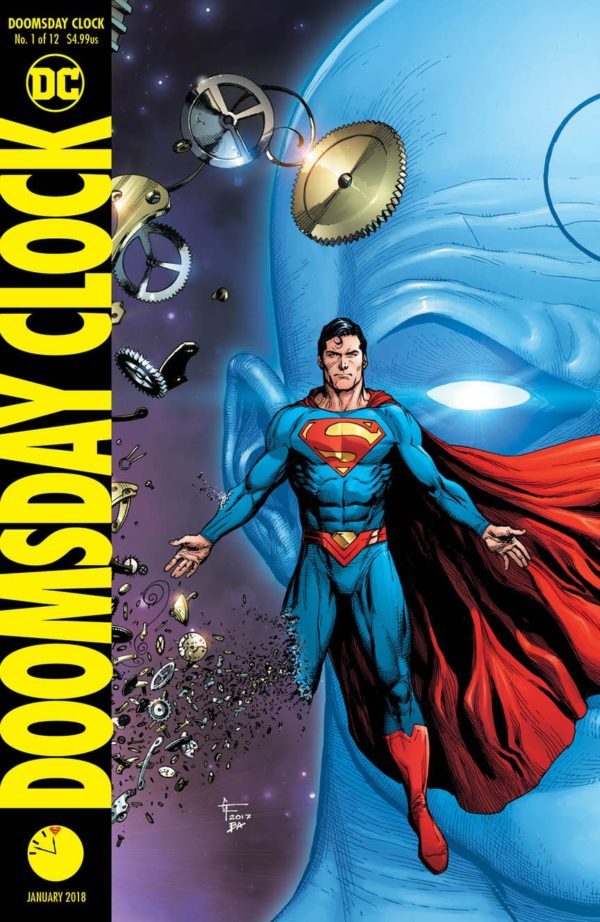 For over 30 years, Watchmen has been considered one of the best graphic novels ever created, breaking new ground for comics with its serious themes, characters and deconstruction of the superhero genre. Now DC’s Geoff Johns and artist Gary Frank is crossing Watchmen over with the DC Universe after over a year of build up with DC Rebirth, pitting Superman against the powerful and omnipotent Dr. Manhattan in Doomsday Clock. If this first issue is anything to go by, Johns is creating yet another memorable series. Spoilers will follow…

Rather than starting things off in the DCU, continuing the threads of Rebirth’s mystery of what exactly Manhattan has been doing to the heroes in stories such as The Button, ‘A Lonely Place of Living’ and ‘The Oz Effect, Johns instead places nearly this whole issue in the world of Watchmen. Set seven years after the events of that book, the world is in turmoil as the truth about Ozymandias’ plan has been revealed, causing worldwide alliances to crumble and people out for his blood.

It was interesting to start things here and get a look at what has happened to this world and characters. It’s funny to see that everything Ozymandias predicted should the truth ever come to light is happening, reminding readers just how forward thinking he is. He was the only Watchmen character to make an appearance, however, as Johns merely hinted at the other characters while introducing some brand new ones, including a new Rorschach. 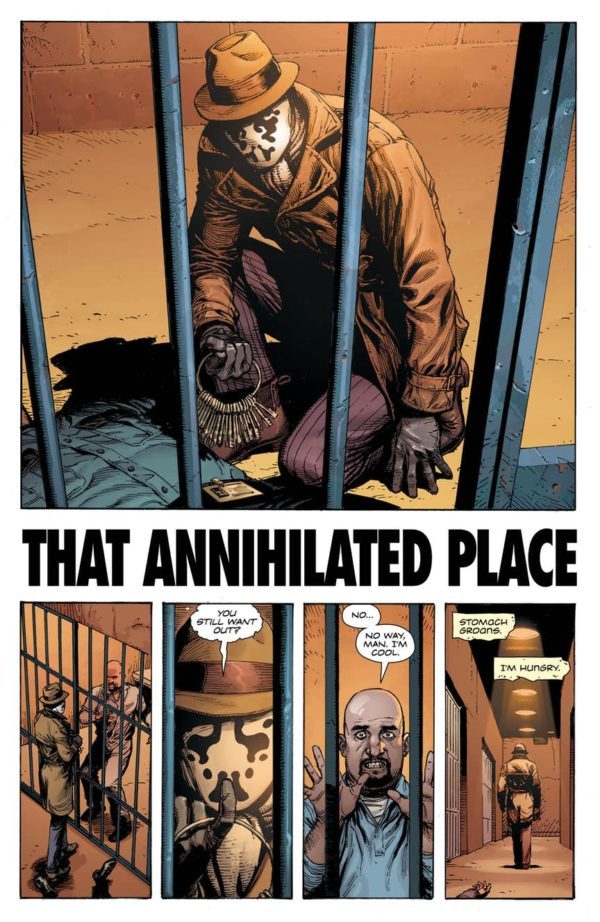 The characters were all pretty interesting with the newest additions Marionette and Mime, the latter in particular, standing out. This new Rorschach is interesting with how much he shares in common with the original, such as view of the world and speech pattern, to how different he is. His constant forgetfulness over details, whether it’s the cell he’s breaking Marionette out of or forgetting the date, amps up the intrigue as it makes him a fairly unreliable narrator as well as who exactly is under the mask.

Despite Rorschach, it was Marionette and Mime who provided some of the most memorable scenes. Mime’s introduction was one of the highlights of the book and gives it a sense of levity amid the seriousness of his character and the story, balancing both very well. Marionette is also an interesting character, but what helps make the pair feel fresh from other Watchmen couples is the fact they’re both villains. Johns has always done fairly well in creating villains, even unique takes on old ones, so it will be fun to see where Marionette and Mime go in the story.

Speaking of villains, it was surprising to see Ozymandias appear so soon in the story. Though he didn’t do much, Johns had a good handle on his characterization; his writing sounded like Moore’s Ozymandias with the unapologetic ‘world’s smartest man’ and the reveal of his health situation was a good surprise. It’s actually nice that Johns has stakes riding in the Watchmen world as well as in the DCU: Ozymandias and his group are trying to find Manhattan in order to prevent their world from destruction. It ups the stakes by making two universes in danger, yet making each one different. The Watchmen world once again faces a physical threat with nuclear war while the DCU seems to be facing an existential and philosophical battle as Manhattan pulls the strings behind the lives of Superman and many other heroes. 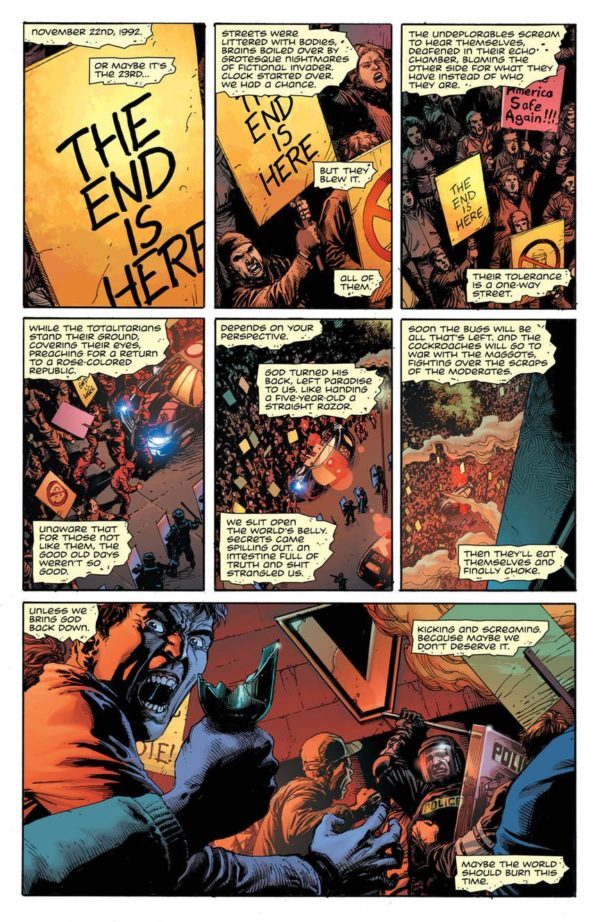 Gary Frank’s art was great throughout the issue. His rendition of Ozymandias was spot on and the little Bubastis kitten was cute as hell. What made Mime such a highlight of the story in fact was Frank’s facial expressions on the mute character. The emotions on Mime were conveyed perfectly through Frank’s work. More than that, though, Franks really captured the look and feel of Watchmen, recreating its atmosphere through its similar grid-panelling and designs. Brad Anderson also helps the issue retain Watchmen‘s feel through his colour work, making each visual standout despite the dark colours he uses throughout. He does a lot of good work playing with the shadows that fall on characters faces, particularly Mime.

Doomsday Clock #1 is a pretty solid introduction to the series. It acts as a good continuation of Watchmen by retaining the look and feel of the original while bringing something fresh with it. Johns makes some pretty clear allusions to the current times in the world, making this book, as the original, very relevant to new and old readers alike. Franks and Anderson’s combined artwork help the issue stand out with some great visuals that help Johns keep that old feeling. While it didn’t feature a lot of Superman or Manhattan, it certainly did set up an exciting premise.