Alex Moreland talks to Doug Liman about The Wall, growing as a filmmaker, and more…

Could you tell us a little bit about the development of the movie? How did you initially get involved with The Wall?

I mean, with the script I had read as a writing sample. People didn’t think I’d be interested in a movie this small. And I was like, “yeah, I love the writer, I love this movie –  who’s making this movie?” – and it was available. I hadn’t made an independent movie since Go [in 1999], but I was still thinking of myself as somebody who makes independent films within the studio system. My heart’s never that far from making independent films. Even working with Tom Cruise on Live Die Repeat [also known as Edge of Tomorrow], you know, at the end of that shoot Tom and I would run off, just the two of us, with a camera and shoot little scenes for it. Like it’s a little low budget independent movie! This was a chance to do a whole movie that way.

I read an interview with you where you commented that this isn’t really the style of movie that you would necessarily watch yourself, because it’s got a small cast and few locations. I was wondering, did you find yourself working against your instincts?

It was a chance to grow as a filmmaker. I make… most of my movies are completely different than anything I’ve ever done before. In this case, this was going to be one of the biggest challenges of my career, because I do have a short attention span and one of the ways in which I have consistently dealt with it is by having a lot of spectacle, and a lot of characters, and a lot of locations, and a lot of different moving parts. You never get settled into any one thing for too long. This was going to push me to grow as a filmmaker, and then to maybe not use some of the ‘copouts’ I’ve used previously in my career.

As you’re saying there, it’s a bit of a departure from some of your recent work. Where do you see your directorial voice shining through?

Well, finding humour wherever there was a possibility for humour – which there obviously is not much. I always look for humour – The Bourne Identity has a few humorous moments. That’s a franchise that doesn’t lend itself to humour at all. So, it’s easier to do that when John Cena and Aaron Taylor-Johnson were both injured, to find the lightness and humanity in that. That comes from a place where my family, during moments of tragedy – you know, like a funeral – they would turn to humour. So, I’m used to combining humour with the really serious things, whenever possible.

So, it’s a very character-led movie. I was wondering how do you go about creating strong characters?

Well, it’s all about character. I don’t know who first said that, maybe Hitchcock, but it is. Ninety percent of your work is done in casting when it comes to a movie like this, a character-driven movie. And I was looking for a dynamic between Aaron Taylor-Johnson and John Cena that they both brought, I wouldn’t say automatically, but they both could deliver well above and beyond even what my aspirations would be. I’ve always lucked out that my movies are better than they deserve to be, specifically because of the actors I cast and how I empower them. Decisions are made for these characters that are smarter than the decisions I would have come up with on my own, if I didn’t have actors of those calibre working with me, alongside me.

And what was the casting process like for this movie? How did you find them?

It started out, actually, with me trying to cast people that looked the part of people who actually serve in our military. I wanted somebody young. People enlist at 18. You’re a sergeant, you’re a commander of other men by the time you’re in your early 20s. You grow up a lot faster in the military. I wanted to cast people who were age appropriate. That’s something that… You know, I did a TV show, The O.C. [Doug directed the first two episodes of the teen drama] set in high school, I cast actors who were just turning 18 whereas other shows had 25-year-olds playing high schoolers. That sort of reduces your pool, because then I also need characters with star presence. What I really wanted in John Cena’s part was somebody who’s on-screen presence told you that everything was going to be okay. And that can’t be acted. Some actors they’re stars, they have it. John Cena has it. Given the event that unfolds, the story would be way more dramatic and exciting the more you believed John Cena was going to take care of things.

As you’re saying it’s a military movie, and it’s set as the Iraq war is winding down. That’s still recent history; did you worry that it was almost too recent?

You say like, recent history. It’s still going on today.

We still have soldiers over there. We have soldiers all over the world. Just went there lately in Niger, and doesn’t make the front pages of the newspapers anymore – but there’s not a week that goes by that an American or British serviceman doesn’t die somewhere in a combat operation. Every week. It’s just not in the news any more. So, this is not a movie about the Iraq war, this is about the soldiers who are in the field today, fighting. To keep us safe. Fighting over there so that the fight doesn’t come here.

To do a movie about Iraq and the Iraq war, it’s probably too recent. I’m not sure people want to go pay money at a movie theatre to relive that. But this is a story about people who are fighting in a conflict zone, and some of the American people don’t even know we have soldiers there. Some of them don’t even know where that country is. Or that it even was a country. And that we have people every day, out there, fighting and risking their lives. And it’s not sexy, like the shock and awe of the Iraq war. But it’s the day to day, nuts and bolts of our soldiers out in the field, and I really was drawn to the smaller scale conflict where the soldiers are really sent out on their own, without the kind of support… You know, they don’t have a reporter from CNN and a reporter from Fox following them. They’re alone out there fighting, always outnumbered.

But American soldiers and British soldiers travel into the field with so much capability strapped to their bodies, and training for their bodies themselves, that they’re kind of like Iron Man. The thing I was drawn to in The Wall was that Aaron Taylor-Johnson keeps turning to his pack and he’s got stuff on him to deal with any scenario. And that’s not made up, that’s what American soldiers carry into the field with them, so that they can survive on their own when they’re completely outnumbered and out-gunned.

On another note completely, I wanted to quickly ask about Chaos Walking, which you’re working on at the minute. Patrick Ness’ book, the source material, is quite a literary book, really making use of its written form with the idea of The Noise [a disease affecting all human men and animals, meaning everyone can hear their thoughts at all times]. I was wondering, how is that proving to adapt? How are you approaching it?

The Chaos Walking movie is sort of like The Bourne Identity because Daisy Ridley and Tom Holland are being chased to their death, in this case across a planet that’s just begun to colonise. It has a lot of the elements of The Bourne Identity – of two strangers on the run, getting to know each other and trying to survive against overwhelming odds, but getting closer during the course of that.

What really sets Chaos Walking apart is that Tom Holland’s thoughts are projected out for everybody to hear, as are all the men’s thoughts in the story. You know, I’ve committed my life to try to make original movies. Even when I tackle a genre; by definition, genres are familiar. So, I’ve worked my whole career to sort of surprise people with my interpretation of a genre and then occasionally projects come along like Chaos Walking that is so original in its content that, like Live Die Repeat, there is no conventional way to make the movie.

But what was so extraordinary about it was any time I was shooting a scene and I was like “I’ve seen it before”… You know, you shoot a car chase, at some level you’re like, “Ah, I’ve seen this before” and you push yourself and try to make it a little bit different. But in Chaos Walking, if I thought I’d seen it before I would realise “oh, I’m not using The Noise enough”. And the moment I’d stop and re-compute whatever it is we’re shooting and put The Noise front and centre it suddenly became way more fun and way more original. It was like a gift that kept giving. It started out as “Oh my God how am I going to do this” and it ended up being… There isn’t a scene in this movie that’s not totally fun and original, specifically because of The Noise. 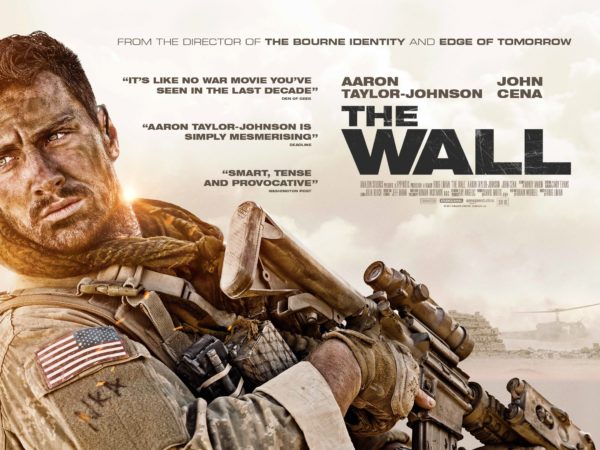 That’s great to hear! Just as a final question to wrap everything up, then:  What’s the most important thing that you’d like audiences to take away from your work, both on The Wall and in general?

What do I want people to take away from it? I’m like Tom Cruise. I want audiences to be entertained. And I want to create thought provoking entertainment. I’m not interested in empty cotton candy entertainment where it ends and five minutes later you’ve forgotten it and it didn’t stick with you. That’s why my movies tend to have very strong characters – because characters stick with you, long after the movie ends. Maybe you don’t remember the plot any more, but you’ll remember the characters. I want people to come away from The Wall and remember Aaron Taylor-Johnson’s character, and his strength in the face of overwhelming odds. I want them to remember John Cena and his zest for life and his kind of ‘been there, done it before’ attitude in the face of something that would make another man quiver and shake in fear, and his comfort in a war zone from his previous experiences. I want people to remember that character.

So that’s what I want people to take away from my movies. That’s why I like big action movies, because I like to put characters into extraordinary circumstances. I feel like you get the best window into their souls when you confront them with the most outrageous scenarios. Tom Cruise reliving the day in Live Die Repeat is an extraordinary scenario but with The Wall I discovered I don’t need some crazy science fiction concept for a human being, because that kind of extraordinary situation? American soldiers and British soldiers are put in those situations every day.

Doug Liman, thank you very much!

THE WALL is now available on Digital Download, Blu-ray and DVD.