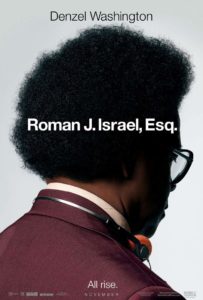 Denzel Washington stars as Roman Israel, a driven, idealistic defense attorney who, through a tumultuous series of events, finds himself in a crisis that leads to extreme action.

We’re all greater than the worst thing we’ve ever done. It’s something the titular morally upstanding defense attorney Roman Israel philosophically states, serving as the backbone to Dan Gilroy’s (2015’s outstanding debut feature Nightcrawler) sophomore film, titled as awkwardly as its protagonist played by the ever reliable and superb Denzel Washington. Roman J. Israel, Esq. is about how even the ones with the strongest moral compass imaginable are prone to making a mistake that can tragically cost them big time in the long run, except the journey to that revelation is littered with pointless subplots and mundane direction.

Writer and director Dan Gilroy should be thanking his lucky stars the film is headlined by someone as talented as Denzel Washington; without his introverted, possibly autistic, socially weird turn as a lawyer cosmetically stuck in the 70s (Denzel sports an out-of-control afro, dated business suits that often don’t even match, refuses to drive, listens to music on Walkman headphones as he walks from destination to destination throughout Los Angeles, and more) there realistically isn’t much to recommend here. Roman is an odd duck, seemingly unable to communicate or function in society with any sense of normality, as he frequently stumbles and mumbles through dialogue like only Denzel Washington can. The difference here is that the highly educated and mind-blowingly smart small-time attorney (at one point the character showcases his OCD knowledge of California legal codes to co-workers) is generally unable to keep his head up or look people in the eye during a conversation, and has a habit of botching all instances of social interaction. He doesn’t even appear in court, choosing to stick to paperwork in offices.

When his longtime partner enters a coma prompting the family to do away with the law firm, it puts Roman out of a job until George Pierce (Colin Farrell delivering another solid performance although it sounds like he switches between Irish and American accents from time to time, sometimes even in the same sentence), a protégé of the dying man offers him some work. He’s more of the soulless corporate type than the charitable and social activist type of Roman, but money is money, and otherwise Roman will be sleeping on the streets. The problem is that their opposing viewpoints and personalities never really conflict in a manner that makes for compelling drama, which is downright shocking considering that, once again, this is from the director that gave Jake Gyllenhaal a terrifying sociopathic role that was as equally horrifying as the mainstream media it was scathingly depicting. If anything, it’s just a bunch of legal law firm technical jargon and half-baked conversations regarding ethics that go through the motions.

Roman also befriends a college student (Carmen Ejogo) who is deeply interested in the way he views the world despite all of his idiosyncrasies. Unfortunately, like a lot of subplots brought to the table in Roman J. Israel, Esq., the companionship never ends up anywhere exciting. Furthermore, much of the writing at the dinner date they share together feels amateurish; her entire character is nothing more than infatuation with this intelligent and morally conscious older man, which isn’t necessarily a bad thing, but even though their chemistry together as actors is fine, they don’t add any more depth to each other. Their most memorable moment together is attempting to help a sleeping bum that they presume to be dead, yielding amusing results.

Amidst all of this, Roman is tackling a case defending a black high school senior for a murder he didn’t commit but technically was in the area for as a friend unknowing of what was about to take place. Although it would have been nice to see exactly how Roman makes a difference in the community and battles against wrongful accusations, systemic racism, poor civilians unable to afford a fighting chance (interestingly, it’s made known that Roman is putting together a game-changing class-action lawsuit that could change all of these lingering social issues, but unfortunately this element of the plot is also presented and overlooked), the case does tempt him into disobeying everything he stands for. Obviously, I will not spoil why, but due to this the third act of the film does generate mild thrills.

Admittedly, it is also fascinating piecing together just how similar Nightcrawler and Roman J. Israel, Esq. are, even though their central characters are wildly different. Both are socially maladjusted and introverted, dealing with their financial issues in the underbelly of Los Angeles in ways that suit their individual personalities, but they both see the world from a cynical and rotten perception. Roman even bursts saying “I’m tired of doing the impossible for ungrateful people”, transitioning to the dark side. Even at his worst, he’s still a far better person than the monster in Nightcrawler, but they and their respective films are more alike then one would assume at first glance.

Disappointingly, Roman J. Israel, Esq. isn’t similar in quality, but Dan Gilroy’s directorial voice remains intact. It’s a misfire for sure, but his next project should definitely be anticipated solely for whatever unorthodox character he cooks up next.