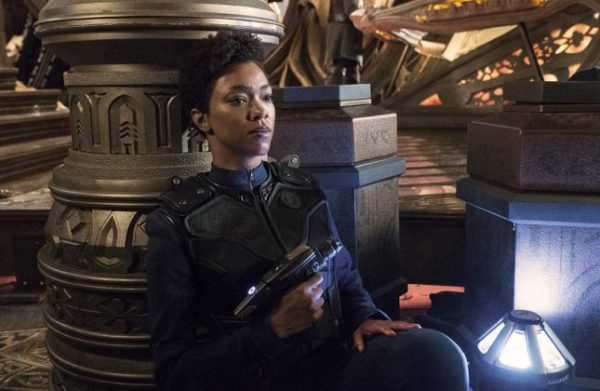 I think it’s fair to say that this was the best episode of Star Trek: Discovery so far.

Certainly, it was a better episode to end the series on than last week’s would have been – indeed, I’m surprised that it was ever seriously the plan not to have this act as mid-series finale. (Conspiracy: This episode was always intended to be the mid-series finale, and the move forward was staged as a show of support. Probably nonsense, but I’m sticking with it.)

In a way, what this episode achieves is fairly simple – but no doubt deeply difficult to pull off. Slick, confident and engrossing, it was one of the most exciting hours of television that Star Trek: Discovery has offered so far. From the tense infiltration of the Klingon ship to the surprisingly stressful spore jump sequence, the episode was an absolute delight. Stamets’ spore drive jump was particularly impressive, actually – embodying exactly the sort of ingenuity and use of technology to solve problems that I’ve love to see more of from Discovery in future.

And, of course, that ending – you could see it coming a mile off, particularly with that almost Chekhovian (in a non-Star Trek sense) reference to mirror universes earlier in the episode. It’ll be interesting to see if this represents a new status quo for the programme, something of a Voyager by way of Quantum Leap style of Star Trek – isolated in another universe, stranded away from Federation space, and always hoping that their next leap will be the one to take them home. Certainly, it’s an interesting prospect, and I’m looking to see where it’s going to go next. 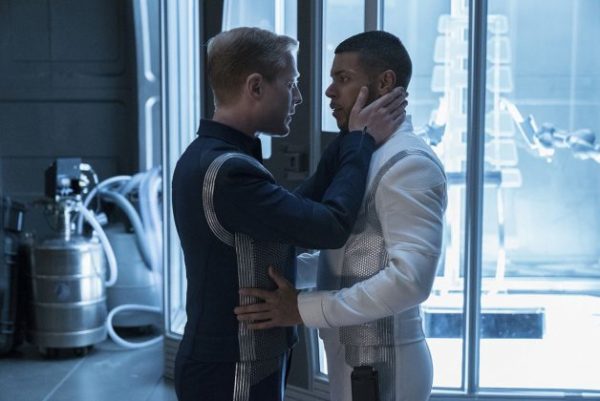 ‘Into the Forest I Go’ also had several little character moments I appreciated; while Tilly and Saru perhaps were somewhat underserved, everyone else came out of it particularly well. From big central moments like Stamets and Culber’s wonderfully sweet declarations of love, to the subtler moments like Lorca using his eye drops so he could watch the Klingon ship explode, it feels like Discovery has finally got a handle on how to let the characters shine. As ever, it’s elevated even further by the hugely talented cast working on the show and embodying these characters – it might be because I’m just used to them, I suppose, but it really is difficult to imagine this working as well as it does with anyone else.

Despite the positivity, though, it’s worth remarking on Discovery’s treatment of Ash Tyler here, which… certainly takes a turn in this episode. There’s something strange about their reticence about actually using the word rape, even as the show will readily imply it; there’s a line in there where Tyler describes L’Rell as his “torturer”, but for a moment he pauses just before he says it and I was expecting him to say “rapist”. Which, in context, would make sense – that’s clearly what’s happening, despite the apparent unwillingness to be direct about it.

Because of that, though, there’s something deeply uncomfortable about it – particularly given the willingness to actually depict said rape fairly overtly. I’m struggling to articulate exactly why this is so off-putting; it’s in poor taste, clearly, and certainly ill-advised. In theory I suppose it’s not exactly a mistake, per se; while there’s probably valid questions to be asked about whether Star Trek is the place for a storyline about sexual violence, I wouldn’t say that it’s necessarily immediately beyond the scope of the show.

No, I suppose my issue is that it feels… gratuitous. Another symptom of the early, almost unthinking, inclination to be a “dark” programme – a desire to seem adult without considering what that would actually mean on a storytelling level. The fact that the camera will readily linger on a naked Klingon while the script itself won’t commit to using the word rape… no, I’m not convinced they’re handling this particularly well at all. (Which isn’t to say that it couldn’t work, but right now it doesn’t.) 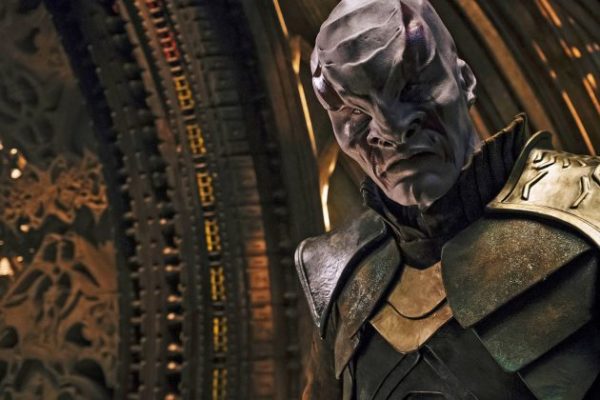 So, nine weeks later, it’s worth asking: What is Discovery at this point?

I’m inclined to be positive, on the whole. It’s taken a while, but I think that this was a really confident piece of television – ‘Into the Forest I Go’ felt like an episode of Discovery that had a real sense of identity, with a consistency the series has lacked since the opening two parter. If this is taken as the model for upcoming episodes, I’d be thrilled; like I’ve said, this was an exciting and engaging piece of television, and it feels like it sets up the rest of the season perfectly for a genuine new beginning.

I hope, now, that we begin to move away from the Klingons; certainly, this episode felt like something of a real conclusion to that arc, with the bulk of the war over. There’s an obvious hangover, yes – the question of L’Rell and Voq, for one thing – but outside of that this really does feel like an opportunity to move on from this aspect of the show. Really, it’s difficult to say it succeeded exactly, and in a way this episode highlighted that quite overtly. When Burnham starts to use the universal translator, Kol makes a comment about how this is another way the Federation are overpowering their culture – which serves only as a reminder of how little they developed that motivation, leaving the Klingons largely characterless, while at the same time really showing just how interminable it is having them actually speaking Klingon.

Ultimately, though, the series is in a strong position right now. It concluded with one of its most confident episodes to date, a piece of television that rattled along – yes, there were flaws, and yes, there are a few narrative inconsistencies, but it was massively entertaining. Really, I’d go so far as to say that none of the episodes so far were quite so engrossing as this one; it’s a genuinely good spot for the series to draw to a temporary close on, and certainly one that’s leaving me actively wanting more.