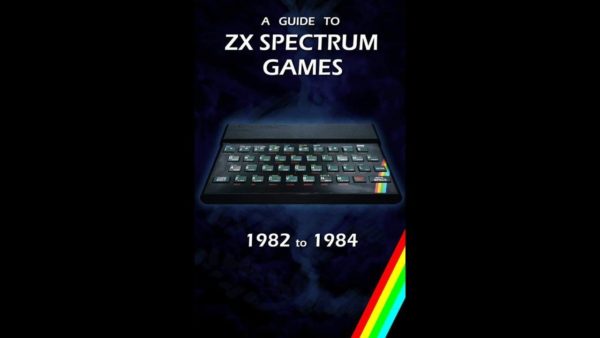 There’s an increase in love for all things retrogaming emerging across the globe, and at the same time there is also appearing a large number of books chronicling the history of the machines and the games of the past.  Of course the greatest machine to ever exist (the ZX Spectrum) has received a fair number of books so far, but this latest release A Guide to ZX Spectrum Games 1982 to 1984 – from Shaun McClure and Hilary Wells – comes with an added bonus;  one of the authors actually worked in the gaming business.

Shaun McClure’s career in the gaming business saw him as a graphic artist for some of the most recognised software houses of the day which included Ocean, Gremlin, Activision and Codemasters, where his name is attached to many titles including NARC, C.J. in the USA and Lords of Chaos.  The man knows both a) his onions and b) the people within the business, and it’s the latter knowledge of Shaun’s that really adds the cherry on top of the A Guide to ZX Spectrum Games cake.

Throughout this rather heavy book, that weighs in at just over 500 pages, Shaun brings to us his honest opinion on well over 170 games published on – and between – the years 1982 to 1984.  Not all of the games are classics, obviously, you find the likes of Shadowfax and Percy, the Potty Pigeon sat next to titles like Ant Attack and Manic Miner.  This is one big mixed bag of tapes which Shaun has brought to review and it’s great being reminded of games that had been forgotten, or shown classics that had slipped past you decades ago.

As mentioned above it’s Shaun’s knowledge of the past people ‘in the business’ that really brings something extra to these pages.  Shaun has tracked down ‘legends’ from the gaming industry and delivered some excellent interviews, which include Steve Turner, Mel Croucher and the elusive Don Priestley.   As a side note, I myself have been looking for Don Priestley for sometime and after reading the interview, discovered I was actually on the right track months ago.

One of the standout interviews within the covers is from Simon Brattel, who was part of the coding team behind Hall of Things and Dark Star.  Unlike your run of the mill interviews you normally find in twee magazines, Shaun delivers an excellent cocksure piece.  Simon doesn’t beat around any bushes as he recalls how Hall of Things came about and I was smiling due to how fantastic his attitude was – as I read through the interview – so much so I didn’t want it to come to a close.  When it finally did, I wondered if this was taped interview and if there was anymore of the conversation Shaun left out, so that we may one day get to listen to it.

As a Spectrum fan I enjoyed reading through A Guide to ZX Spectrum Games, though there are a few personal negatives that I would perhaps like to see amended in the next volume.

No blank spaces.  Every so often we get a blank space where a programmer or artist is not mentioned.  Instead of a blank space I really would have preferred a line of text saying “No name given” or something of that ilk.  The blank space next to the dash, for myself, felt like there was text missing.

Lack of colour.  I read the paperback release, which is completely in black and white; this may not be a major concern for most people but I personally would like colour screenshots throughout the ZX Spectrum book.  There is however two colour versions available one on the Kindle (much cheaper) and much more expensive colour paperback version.   Speaking with Shaun, he tells me the Amazon’s printing costs ramp up for the colour version, it would be nice to hear if the future volumes fall towards a different printers and we see some colour in the pages.

These two personal negatives aside however don’t detract from the fact that A Guide to ZX Spectrum Games 1982 to 1984 is a great read for fans of the ZX Spectrum, especially the numerous interviews scattered throughout the pages.   This isn’t a mere pamphlet with Manic Miner and nine other games in it, this is one weighty book from Hillary Wells and Shaun McClure that really delivers the Speccy gaming history rather well.