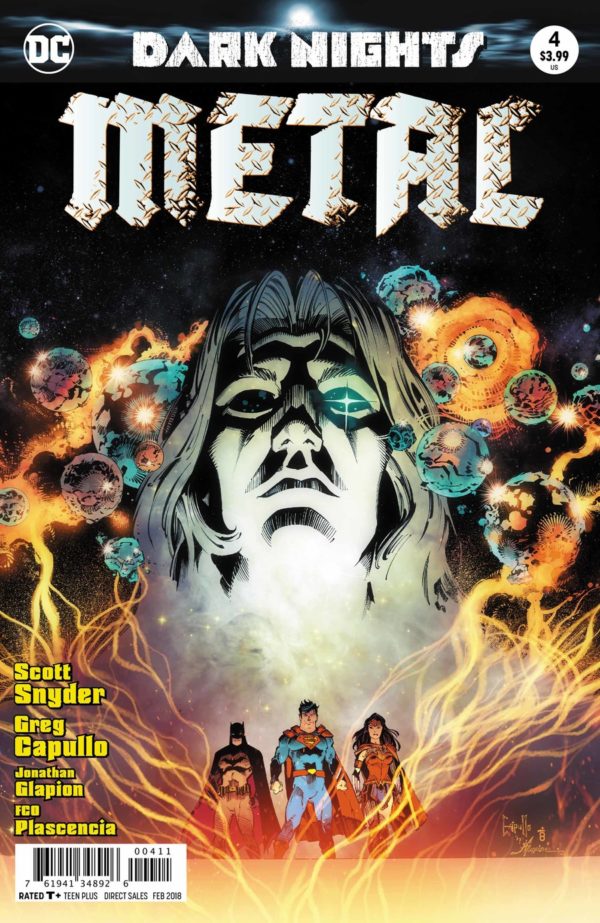 DC’s miniseries Dark Nights: Metal returns with its fourth issue after a bit of a break with its several tie-in issues and one shots. Scott Snyder and Greg Capullo craft another good chapter in their crazy universe-spanning tale, focusing on Batman and Superman together as they seek answers to defeating the Dark Nights and saving the world.

Compared to the previous issues, including some of the tie-ins, Dark Nights: Metal #4 was a fairly quiet one that devoted much of its time to answers or furthering other questions. Its to Snyder’s credit, though, that the issue didn’t feel dragged out or too exposition heavy by still giving some entertaining and well written interactions between the characters. Superman and Batman in particular develop nicely as Superman is able to remind Batman of what’s at risk in the world. The moment where Batman admits Damien and his family give him hope was a great emotional one, allowing readers to get a glimpse at Bruce Wayne and his humanity as he rediscovered the will to fight.

The roles of the other Justice League members were nice, too. Its great to see Snyder making pairs that you’d never think of before, such as Aquaman and Deathstroke or Wonder Woman and Doctor Fate. Green Lantern and Mr. Terrific have a fun report with good back and forth comments from them. Their story is interesting as it adds a new wrinkle to the dangers the invasion faces with the reintroduction of a classic Justice League villain. Deathstroke’s disregard for Atlantean custom and sacred burial grounds is also fairly funny.

Though I said that Snyder does keep the issue from being too full of exposition, there is a lot of dialogue in this issue of just characters talking to others and some things being explained. As I said, it doesn’t bog the issue down much as most of the dialogue is entertaining, but it is also some high concepts Snyder is dealing with here. The story comes off very Grant Morrisony as you just have to accept the crazy things happening and stay for the ride and what the nature of a story means. It might put some people off, but crazy high concepts is what you get when you mix together the works of Morrison and Neil Gaiman into one.

Capullo’s art is very nice to look at throughout the issue. There are some great images here, from the Nightmare Supermen to Dream and a very cool splash page. The imagery elevates Snyder’s already insane story and Capullo does very well with his character work. Its great to see him drawing several characters from across the DC Universe, even the obscure ones, and he puts a nice level of detail into them. From the way Batman looks so frail to Daniel’s commanding posture, Capullo really sells the body language of the characters.

Capullo’s art is helped further by FCO Plascencia’s colours, making each image pop and vibrant. He uses a good mixture of lights and darks and a variety of colours throughout the story. Capullo’s splash page is made all the more memorable in the issue thanks to Plascencia’s colours in it. Their final image is also one of the most ominous in the whole series so far thanks to their work.

Dark Nights: Metal #4 may not be quite as exciting as the previous issues, but its a nice chapter that gives some breathing room for the readers and isn’t too heavy on the exposition. Snyder balances the expositional scenes well with the character development and story while Capullo illustrates some excellent imagery with Plascencia’s vibrant colours. With the ideas and the cliffhanger presented, its exciting to think of what awaits the heroes and readers in the series.