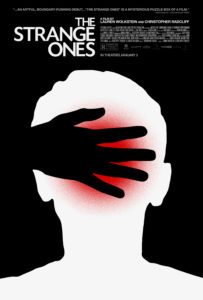 Mysterious events surround two travelers as they make their way across a remote American landscape. On the surface, all seems normal, but what appears to be a simple vacation soon gives way to a dark and complex web of secrets.

It’s not uncommon for upstart filmmakers to expand their portfolio from short films into full-length features by adapting and expanding upon one of their very own small stories, and that’s what Christopher Radcliff and Lauren Wolkstein have chosen to do so here with their hazy and moody psychological thriller The Strange Ones. However, the decision to select this piece to rework into an entire film is a questionable one as even at the gaunt length of 82 minutes the script and direction clearly feel stretched thin, unable to do anything interesting with any of its bizarre constructions. There appears to be either a supernatural element or questionable reality, but it never amounts to something substantial, disappointingly serving as trippy snippets meant to trick audiences into believing the experience is more complex than actually is.

At the center of the on-the-run cross-country road trip headed to a rural American camping site are two males (one a young adult with the other being a high school teenager) presented as brothers, Nick (the fittingly handsome Alan Pettyfer) and Sam (James Freedson-Jackson from Spider-Man: Homecoming director Jon Watts’ overlooked indie-gem Cop Car turning in another strong, taboo performance beyond his years). They are hesitant to reveal their real names to any civilians encountered during their travels, but we can gather that something isn’t quite right from alternating tones throughout dialogue exchanges (Sam switches from fearing for his life on the verge of tears and feeling comfortable and relaxed if unsure of what is happening around Nick, which isn’t an easy balance to strike but is wonderfully done so here), nightmarish flashbacks to a burning home and deceased older man, and general secrecy clouding most of their actions.

Throughout the early stages of The Strange Ones multiple mysteries are raised that are genuinely intriguing, especially when elevated by difficult to read mindsets and characterizations of its central leads. Following that, there is a creative decision to break them off and separate them into separate directions which is where the slow-burn pacing begins to test viewer patience. Not helping matters are the reveals of various aspects regarding the puzzle, which is executed with long and drawn out conversations presenting details in the least exciting manner possible. By the end of The Strange Ones it is hard to care about anything going on.

That’s not the most frustrating crime the film commits, as there is more going on within the characters of Nick and Sam that, while I don’t want to spoil it, pushes past the breaking point of creepiness resulting in a dynamic that is just unsettling without purpose. There are little hints over the duration of the movie building to the realization, but honestly, those that catch on to these tics will spend the rest of the time hoping that the narrative doesn’t go there. It wouldn’t even be forgivable if there was a reasoning for it or a less abstract explanation of why; it’s all just weird and uncomfortable. Naturally, this makes for a dissatisfying resolution to a mystery.

With that said, it cannot be said that the writing and direction don’t nail an uneasy, moderately thrilling atmosphere, and once again, the acting is a definite high point. Unfortunately, the story is miscalculated and executed without asking itself why it should go anywhere that it does. It’s trying too hard to keep us guessing and creep us out, which absolutely does not automatically make for positively slimy watching. As The Strange Ones drags and drags it certainly becomes more and more strange, but concurrently interest wanes and wanes. If you are curious and want to check it out, it’s worth noting that the film is available to rent before its release right now for DirectTV users.