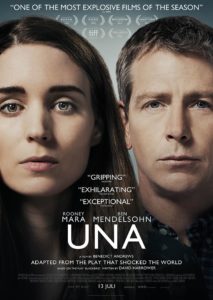 A woman confronts an older man, her former neighbor, to find out why he abandoned her after they had a sexual relationship.

The premise of Una is enough on its own to safely say that it’s going to be an uncomfortable, challenging, and possibly upsetting watch (especially considering the current climate of society where every day a few more celebrities or noteworthy public personas are being outed as sex offenders), but it’s worth rolling through every mixed feeling thanks to the electric chemistry on display from the always fearless Rooney Mara (Carol, The Girl with the Dragon Tattoo) and the severely underrated Ben Mendelsohn (Rogue One: A Star Wars Story, Bloodline). Together, they are able to provide layers to the troubling past and present of their characters that, in the wrong hands, could have resulted in an irredeemable piece of creepy trash; it’s still icky, but miraculously, some viewers will find a lot to unpack by the film’s conclusion.

Backing up a little bit, Una is based on David Harrower’s play Blackbird and adapted by first time filmmaker but prolific stageplay director Benedict Andrews (A Streetcar Named Desire, The Maids), telling the confrontation between Una and Ray (who legally changed his name after serving jail time and rebuilding his life) 15 years later from her abandonment after an underage sexual encounter. Effectively utilizing short bursts of flashbacks during their tense reunion, we see the 13-year old (played by a mature and game newcomer Ruby Stokes) crushing on her neighbor Ray who genuinely seems to care for her. Unfortunately, the script doesn’t dive too deep into his mental state at the time, briefly mentioning he was in a dark place. Assuming that the flashbacks exist to show audiences the truth instead of relying on the words of characters 15 years removed the events, Ray was just that, but it doesn’t excuse his behavior. It’s up to the viewers and Una herself to forgive or not once the full story is out, which is more difficult of a decision to make than it might sound.

Of course, the behavior exhibited in the flashbacks could also be interpreted as manipulative, and that’s what makes Mendelsohn’s performance so riveting; he’s legitimately unreadable, and even if he did have well-meaning intentions, his actions are still highly repulsive. For as good as Mendelsohn is, Rooney Mara is better, demonstrating the psychological trauma that is bestowed upon someone who has suffered the consequences of something so mentally abusive. Una’s introduction actually shows her hitting up a nightclub and immediately hooking up with a stranger in the bathroom, which is surely a side effect of her abandonment (while under the impression of forbidden true love) and possibly being tossed away after giving up her body a few times.

Also, the script does a harrowing job at depicting Una’s life as essentially ruined on a mental level, at least maybe until obtaining closure. Even after confronting Ray, she goes through moments of anger to enjoying his company once again (audiences are always kept on their toes wondering if he could be manipulating her again to keep secure his own new job and family). The direction also has some stylistic touches with its flashbacks, quickly showing Una throwing up outside on the way to reconnect with Ray after reflecting on a happier time. No one wants long-winded flashbacks that break up the taboo back and forth between two tremendous actors, so it’s pleasant that they are short and to the point. Unfortunately, a subplot involving one of Ray’s co-workers and a presentation he has to deliver do interrupt the flow of such intricate dialogue, but it is also forgivable due to how it ties into the third act.

When Una has Rooney Mara and Ben Mendelsohn isolated in a room, the results are explosive, leaving us hanging on every line. Ruby Stokes once again deserves heaps of praise for handling heavy material and playing a teenager wise beyond her years. There is every sense of the impression that this is an adaptation of a play, yet it also retains cinematic qualities and has new material that adds to the overall narrative, all of which is tough to accomplish for a first-time director. There will be viewers that choose to see this film with black-and-white morals (some probably without actually watching the movie), which is simply wrong; it is designed to provoke uneasy discussion, so stay home if that scares you.