A small town is plagued by serial killers dressed as Santa and Mrs Claus, who appear to be escalating their murderous rampage every day. 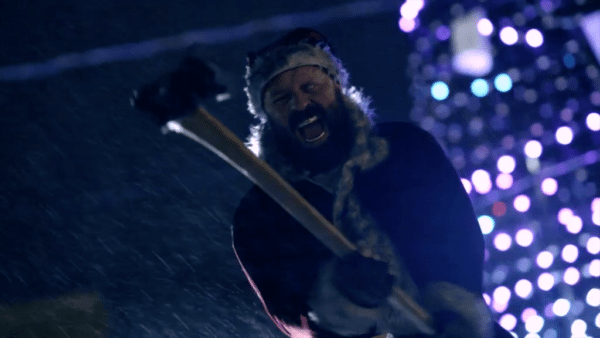 Sometimes a horror movie twist is entirely hidden until the reveal. Occasionally, suggestions and hints are littered throughout the movie so that a discerning viewer might be able to pull the pieces together. Every now and then, though, along comes a film with a plot turn so obvious that the entire audience is way ahead of the characters. Once Upon a Time at Christmas builds towards a plot twist that’s about as subtle as… well, Christmas.

The film immediately introduces its audience to a pair of killers, dressed as Father Christmas (Simon Phillips) and Mrs Claus (Sayla de Goede). The former is a grizzled Brit and the latter is doing an unbearable impression of Harley Quinn from Suicide Squad, with pigtails, skimpy clothing and an irritating voice. They are picking off an increasingly huge number of victims on each December night leading up to Christmas. For some reason, the local sheriff (Barry Kennedy) and his deputy (Jeff Ellenberger) can’t work out why all of this is happening, beyond some sort of link to young shopping mall elf Jennifer (Laurel Brady). 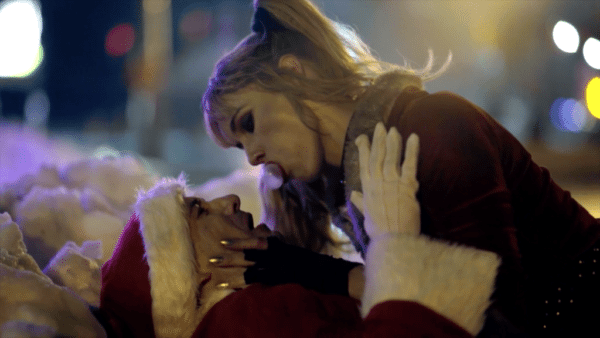 Once Upon a Time at Christmas is a relentlessly exhausting experience. It’s directed by British filmmaker Paul Tanter, who is best known for churning out direct-to-DVD geezery nonsense like the White Collar Hooligan movies. This film slots right into that oeuvre, with every frame exuding shoddy cheapness, like even the sets are held together with sticky back plastic and PVA glue from a children’s TV show. Every splatter of gore and swing of the protagonist’s axe is more amusing than shocking, given that it has obviously been made inside a computer.

The film’s setting and tone is bizarre, caught between its London-born filmmaker and the small town America where the action takes place. There’s a random selection of British characters and part of the central plot hinges on a British slang word that the film has to awkwardly explain in one of many moments that play into the blindingly obvious plot twist that brings the movie to a close. Seeking to solve the mystery are two stunningly incompetent cops, who unironically spout clichéd dialogue about how they were “looking forward to a quiet holiday season”. They are at least 45 minutes of movie running time behind the audience and seem to have no way of putting together even the most rudimentary clues. Barry Kennedy is believable as a world-weary sheriff, but no one so obviously awful at their job could have remained on the force for this long.

The other side of Once Upon a Time at Christmas is equally tough to stomach, focusing on the most unconvincing group of teenagers ever depicted in a horror movie. And that’s not due a lack of competition in that arena. Laurel Brady is perhaps the best of the bunch, but her buddies are handed terrible lines, including one who says a selfie is “totally going on my Facebook Wall” as if it’s the mid-noughties again. All of the film’s discussion of social media comes across like it was written by a pensioner who has never turned on a laptop and finds the very concept of a smartphone terrifying. 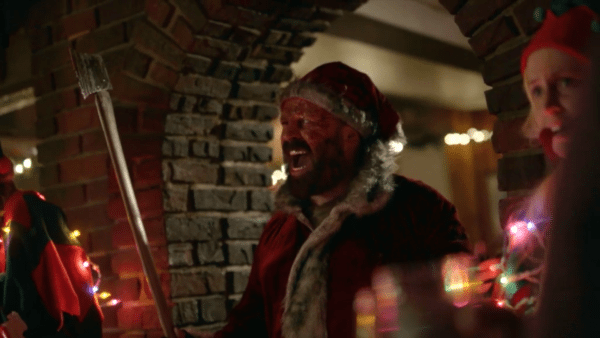 Once Upon a Time at Christmas joins the pantheon of bizarre festive horror movies that get the balance wrong between campy thrills and genuine horror. It’s considerably more Santa’s Slay than Black Christmas and has absolutely nothing to recommend it. Viewers in search of a festive fright would be much better off seeking out one of the other Christmas horror films that are available, because this one is akin to opening your stocking to find a pair of dull socks that are already full of holes.