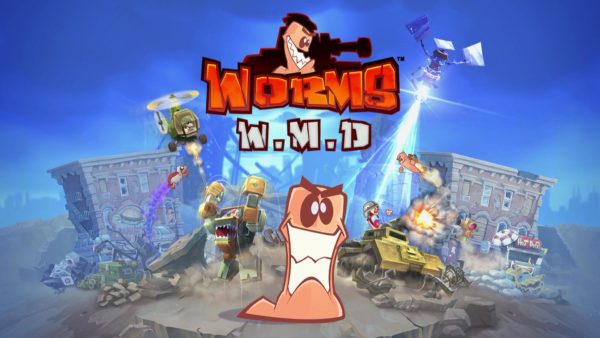 Team 17 have returned to the 2D world of gaming for Worms WMD. It is old school Worms merged supped up Weapons of Mass Destruction – which reign extra mayhem on an array of destructible maps. In truth, this is a simply port from a game released last year on PS4 and Xbox. For the uninitiated newbies amongst you; you take control of a team of worms and your mission is to wipe out every other worm, using a plethora of vicious weapons.

Worms has been around in one form or another longer than I care to admit.  In truth, not much has changed in that time. Team 17 have branched out into a 3D version, then pinball games, by 2D Worms games have always been the backbone of the franchise’s success. It has the same addictive gameplay as its predecessors, which is as a positive and a negative. The positive is that once you have re-mastered the controls there is very little more satisfying than a wind assisted massacre of enemy worms. The negative is, it is still awkward and unintuitive and it takes a good few hours of gameplay in order to subconsciously control the carnage to an acceptable level. 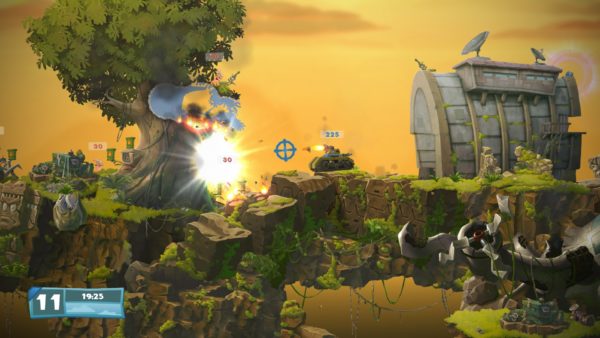 The big addition is the inclusion of massive destructive weapons (nearly right). To be honest, they are a little dull after a while. The initial thrill of laying waste to an enemy team of worms soon becomes dull because the weapons are so overpowered that it offers very little challenge. Any skill, difficulty, sneakiness of using a lone worm is rendered useless when a tank can come along and blow up half a level. To be truly effective, their power needs to be toned down a little bit.

The humour and graphics are what you’ve come to expect from the past 20 years of Worms games. Teams with distinct personalities, silly voices and amusing one liners are still as entertaining now as they were back in the 90s. The graphics are crisp and fun, but being the simple game it is, it was never really going to tax the power of any console.

After experiencing Mario Odyssey and The Legend of Zelda: Breath of Wind for the switch, it feels like an opportunity was wasted with Worms WMD. Team 17 have failed to make adequate use of the functionality that the Nintendo Switch offers, which is a shame as it would’ve added to the experience.

Fans of the series will enjoy it, as will any newcomers to the franchise. Worms WMD is a strong entry in the Worms universe, albeit a very safe entry. The release price for a game that offers very little that its predecessors already don’t, combined with it essentially being a game that is a year old already, makes it a little pricey. 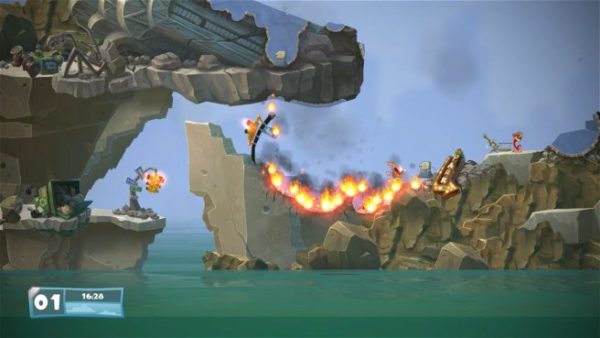 – The WMDs make it too easy.

– Nothing that’s not been seen before.