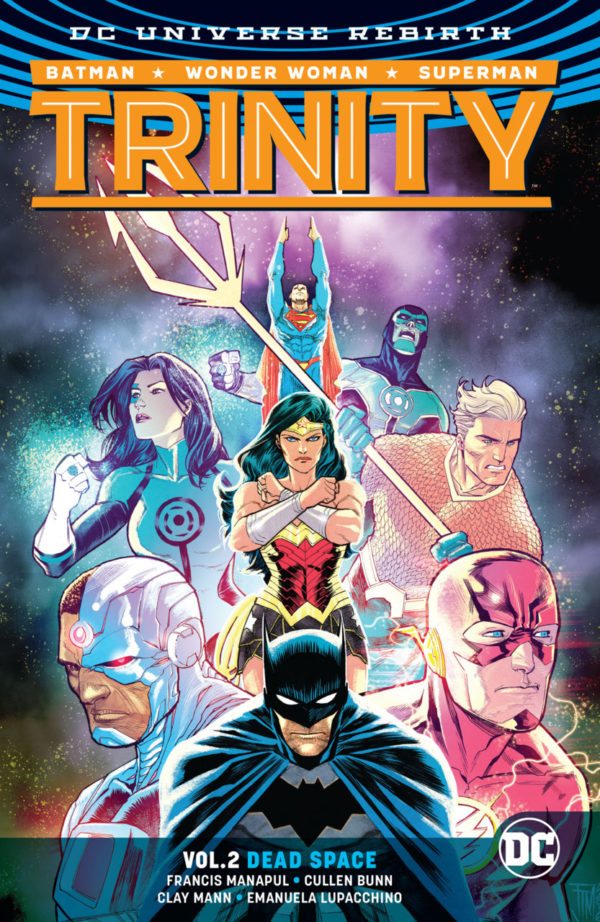 Batman, Superman and Wonder Woman are considered the big three figures of the Justice League and worthy of their own series. Whereas the first volume of Trinity was an introspective look at the heroes similarities and differences, the second volume, Dead Space, offers more of an action story as most of the League is incapacitated and taken over by an alien virus, also causing the Watchtower to fall towards Earth, and its up to the Trinity to save their friends and countless lives.

The book includes two other stories as well, one involving a different trinity of sorts: Lex Luthor, Ra’s al Ghul and Circe – three of the biggest enemies the heroes have ever faced. Circe believes in a prophecy that foretells an alliance between them, courting them to join forces. This story doesn’t add much to the overall book, but instead sets up future issues of the series, such as the Trinity Annual. Its an interesting look at how these three different villains interact, especially as Lex has been working as a hero for the last few years.

The other story is something of a coda to Superman Reborn as Supes fills Batman and Wonder Woman in on the events of that story. It loosely acts as something of a coda to that story, acknowledging Mr. Oz’s (and Dr. Manhattan’s) role in recreating Superman’s history and how some things changed again after Superman’s victory in Reborn. This story doesn’t add too much to the relationships between the three of them – nor does it delve into how their personal history has changed as a result of Reborn. Cullen Bunn’s script in both stories shows he has a good handle on the characters, particularly the dynamic between Lex and Ra’s.

‘Dead Space’, however, is the main attraction. Francis Manapul writes and illustrates the story and does a very good job with both. His art is very animated and the he creates some interesting and cool-looking layouts, making it very easy to follow throughout the story. His characterizations of the trinity are well written as well. Wonder Woman has some nice time to shine and her report with Superman is good as well, showing how well they work together in the face of a crisis.

If there is one complaint about ‘Dead Space’, its that the ending feels a bit rushed as they discover the truth about the viral infection. Everything wraps up too quickly without being fully explained. Even the villain disappears without some closure; its not entirely clear what happened to him or the infection. The ending may leave some readers confused due to the quickness of events and this story might have benefited from being four parts rather than three.

Collected as well are some bonus material like variant covers and plenty of sketches. There’s a few pages of Manapul’s sketches, mostly from the middle chapter of ‘Dead Space’, that shows his preliminary work on one of the big sequences before the colours were added. While its not much bonus material, it is still a good look at Manapul’s art and how he develops it in his stories.

Overall, Trinity Vol.2: Dead Space offers a nice and quick adventure with DC’s big three. Manapul has a good handle on the characters and ‘Dead Space’ is entertaining enough, though it could have used a bit more time to wrap things up at the end. Bunn’s other two stories don’t add too much either, though it is fun to see three of their biggest villains teaming up and is a nice build to what Trinity will later bring.