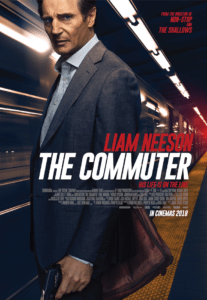 An insurance salesman loses his job but, on his usual train home, he’s approached by an attractive woman offering him a lot of money in return for doing one small job.  How can he resist?

Sometimes a film is a gift, overflowing with so many memorable moments and quotable lines that reviewing it becomes unexpectedly difficult.  It’s usually the sign of a good film.  But not always.  This time, it’s called The Commuter.

What is easily the most boring title of the year doesn’t get it off to a good start.  OK, so January is only a couple of weeks old, but this year’s cinematic offerings will have to go some to beat it for sheer tedium, especially where a British audience is concerned.  The connotations, none of them positive, are limitless.  If only the catalogue of failure stopped there.  Avoiding the obvious and almost as numerous puns, what is said to be Liam Neeson’s final action movie is risible, for all the wrong reasons. 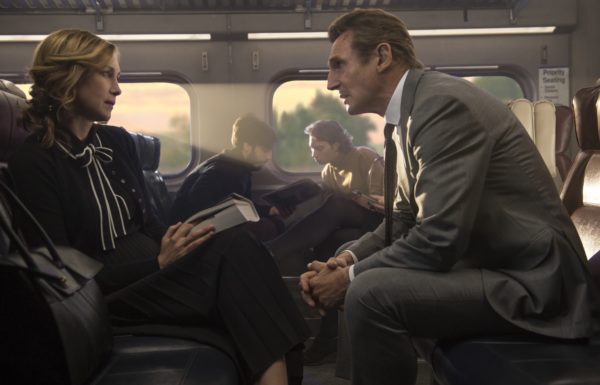 Would you buy a life insurance policy from this man?  Probably not, given what happens to Neeson over what feels like a lot more than just over 100 minutes.  So it’s no great surprise he loses that job early on, only to find himself talking to the attractive Joanna (Vera Farmiga) on his usual train home.  Facing the prospect of admitting to his wife (Elizabeth McGovern) that he’s out of work, his fellow traveller’s offer of a lot of money to do a small job – locating one of the passengers on the train – is wildly tempting.

If only he’d resisted!  We’d have been spared this truly dire attempt at an action movie with a hero who looks sadly past his sell-by date long before he throws his first punch.  Neeson isn’t going out on a high, more’s the pity.  He takes so many beatings that his ability to stand on his own feet at the end of the film is nothing short of miraculous, especially as he leaves us in no doubt that his character is 60 years old.  It’s one of his mantras.  He’s not the only one suffering.  At one point in the film – long after everybody has stopped caring – somebody says they wished they’d taken the bus.  The audience has been thinking that for ages. There’s also a whopping train crash in the latter stages – it’s been coming for most of the film – but it’s the closest it comes to thrills.  Despite the emphasis being on action, this is a movie painfully short on excitement, suspense, tension or anything else.

One thing it does have is laughs.  Unintentional ones.  The cumbersome hint early on as to how things are going to pan out should have a large, neon arrow suspended above it, it’s that obvious.  But the whole thing plumbs new depths at the climax with the most blatant-to-the-point-of-insulting lift from a certain swords and sandals epic starring Kirk Douglas.  Yes, everybody knows the film, and everybody knows the scene.  Dear God, were the writers that short on ideas?

There’s little in the acting to save the whole sorry mess.  Farmiga literally phones in most of her performance, it’s a waste of Sam Neill, Patrick Wilson goes through the motions and even Florence Pugh ventures into cliché territory with her pink hair and tattoos.  And Neeson has been here before – more than once.  Presumably they all just took the money and bought a one way ticket.

The Commuter is a train wreck.