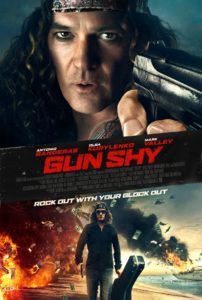 An aging rock star’s wife is kidnapped while vacationing in Chile.

Antonio Banderas appears to be working non-stop at the moment. He’s popping up here, there and everywhere. Largely, we’re seeing him in straight to video action films. His role in The Expendables 3 seemed to re-ignite a connection to a genre he’d been drifting away from slightly.

Gun Shy is an odd mix of Spinal Tap (without the documentary aspect) and Taken. Very much played with tongue in cheek and for laughs, Banderas plays a washed up rocker on a pilgrimage to his native Chile alongside his wife, played by Olga Kurylenko. She gets kidnapped and it’s down to Banderas and his management company’s P.A to set about rescuing her from inept kidnappers. Veteran action specialist Simon West directs.

The elements are in place for something entertaining. Action/comedy. Tony Banderas and the lovely (and underrated) Kurylenko. West, director of such action spectaculars as Con Air and Expendables 2. It should deliver. Oh boy…it doesn’t. It so epically does not deliver. Firstly, there’s no budget at all. The whole film feels like a jape. A gap in respective schedules that needed to be filled with something. It’s all played for fun. Everyone is kind of having a good time but it all feels a bit half-assed. Any time they try to offer any pathos, none of the cast are invested enough dramatically, for it to come off. If you thought Banderas was a little too over the top, and a bit annoying in The Expendables 3, you aint seen nothing yet.

Despite the budgetary restraints, with West at the helm you would still expect a film that looks better, with set pieces that are more impressive. The film looks so flat. If you ever watch any of those terrible British comedy films where they’ve adapted an old TV show (or comic) to the big screen, they all kind of have the same awfully cheap, flat and lifeless look. Think, if you’ve had the misfortune to watch, The Keith Lemon Movie or Fat Slags. You know, they’re supposed to be a film, but still look very much like a TV show visually (and not in a good way). I won’t claim West to be Martin Scorsese by any stretch, but he can ordinarily make a film look sleek and he can put a set piece together. Here there’s nothing. As if he spent the shoot having a holiday, occasionally texting orders to his AD.

The trouble Gun Shy really has, is that the comedy is so broad. It borders Carry On level in theory, but in practice lacks any of the (now dated) cheeky, impish charm. They never go all the way, whilst the script is a desolate, tumbleweed filled desert as far as gags are concerned. The comical approach impacts negatively on the action too because every set piece is played with the sort of silliness normally confined to mid-road Nickelodeon comedy shows. I half expected Kenan and Kel or Amanda Bynes to pop up (in fact, they’d have improved the film). From a seafood fight where one combatant has severe shellfish allergies, to Banderas riding a suitcase down hill while being pursued, the whole thing is utterly daft, but never amusing.

This doesn’t really connect as an action movie. It doesn’t really connect as a comedy. Banderas just seems like he’s doing a drunken (not very good) Jack Sparrow impression. Kurylenko is awkward. She clearly wants to have fun and join in with the merriment but it seems clear that the boys were more at ease with being unrelentingly daft with no parameters in place to control the outcome (you know, like even Naked Gun laid down a line to follow). Her expression wasn’t so much that she was having fun, more that she was permanently trying to convince herself this was fun. It wasn’t. In addition the films original music was so lazily put together too. Part of the reason Spinal Tap worked was the songs were not only brilliant pastiches, but actually worked as rock songs. Talk about bum-cakes…