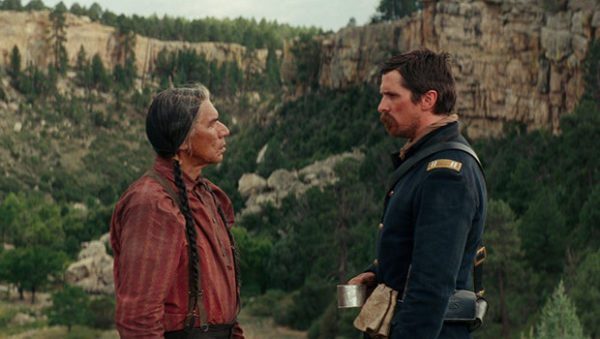 To conscientiously address cultural outcries and debates of the present, political or not, one must first reflect on the past. What rooted beliefs could be driving current logic or behavioral patterns? An adaptation like Scott Cooper’s Hostiles recognizes how history has shown an ugly tendency of repeating itself, translating familiar themes through dressed-down period aesthetics. No modern hang-ups or circular logic that sidesteps epiphany paydirt – just perspective, experience and reflection from those who’ve lived *through* similar situations.

In this case, Cooper borrows from the late Donald E. Stewart’s manuscript about a U.S. Cavalry officer who’s forced to escort an old Cheyenne war chief home to Montana (despite once being battlefield rivals). Times were different in 1892, and Capt. Joseph J. Blocker (Christian Bale) takes great issue with protecting the soon-to-be-released Chief Yellow Hawk (Wes Studi) on their journey to Valley Of The Bears. That doesn’t matter much since orders are orders, and before long Blocker’s detail are guiding one of the enemy (with family in tow) back home for a peaceful death. The trail is long and arduous – native savages and white devils both pose threats – but Blocker keeps his focus on the mission like the loyal soldier he is.

With this, we’re transported to a time when hatred ruled and humanity was lawless. Blocker’s reputation is that of a militant butcher who derives pleasure from slaughtering Indian tribes, yet his own perception of Apaches or Cherokees would echo the same. The West was young and tensions rather untested, which lends itself to a vicious wilderness for Cooper’s party to traverse. Death rides into frame with swift disregard for right and wrong, if only to accentuate how many loses could have been avoided by ethical treatment alone. 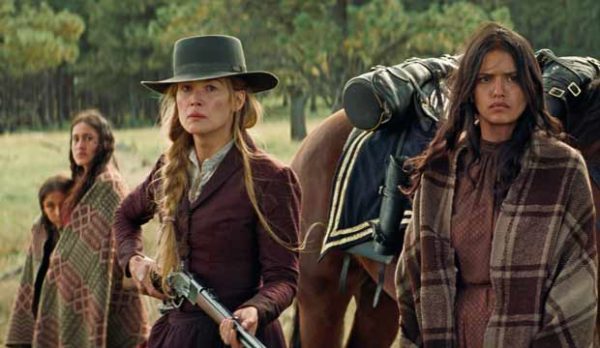 Hostiles is as ruthless and unforgiving as a cross-country monsoon – which, by the way, Blocker is trying to stay ahead of – wasting no time to murder a pioneer woman’s entire family. Rosalie Quaid (Rosamund Pike) is left with a scalped husband, three dead children (varying ages) and a torched cabin thanks to Apache warriors all within the film’s opening minutes. It’s a tonal spike driven between colonists and Indians, which sets the stage for Blocker’s immediate mistreatment and brash belittling of Chief Yellow Hawk (played so quietly expressive by Studi). We’re meant to question righteousness given the tragedies Rosalie endures for plotted drama (in other film’s she’d enact a Kill Bill hit list), but it’s also necessary arc-baiting given she’s “rescued” by the film’s passing cavalrymen early on.

When Rosalie joins Blocker’s ranks, we understand where Cooper’s story will swerve towards togetherness – but that doesn’t matter. As Chief Yellow Hawk’s family extends compassionate gestures – Elk Woman (Q’orianka Kilcher) especially – Rosalie begins dropping her guard. This, in turn, extends to Blocker and his men. Rory Cochrane as Master Sgt. Thomas Metz shares a monologue ripe with crushing guilt after previously trading remarks about the “good old days” when you could kill a native for nothin’ more than trespassing. Blocker eventually drops the bigoted hee-haw act and sees Yellow Hawk for the equal he is; a leader protecting his flock just as Blocker commanded his own troops. Cooper does not force understanding, but instead coaxes it through mutual hardships and Rosalie’s wearing down of Blocker’s gruff, calloused shell.

This isn’t to suggest Pike’s performance is only to benefit Bale’s development – she is, quite possibly, the most memorable character apart from (or including) Bale. Supporting cast includes Stephen Lang (the politics-driven Colonel), Jesse Plemons (as trusted as always), Timothée Chalamet (foreign and inexperienced), Adam Beach (Black Hawk), but we spend the most time fixated on Bale and Pike. One seeking comfort in her protector’s gentlemanly devotion and softening view on retirement, the other ready to leave war behind for betterment’s sake. This is only because of Pike’s ability to deflect race-based judgements and find good in actions – she lets Ben Foster showcase how despicable the opposite mindset can be.

Forest vegetation and rickety pit stop towns make up the country trailways Blocker’s crew shambles down, and cinematographer Masanobu Takayanagi does well by maximizing nature’s loneliness. Groupthink and mob mentality can easily sway the undecided, but with Chief Yellow Hawk’s pack and Blocker’s men forced into isolation together, smaller actions are noticed. Words are listened to. Hostiles features grandiose mountain range shots with invaders galloping over the ride, but it’s at its best in the dead of night, Blocker and Yellow Hawk ready to swarm a camp of women snatchers and beaters. It’s so quiet, the camera so steady, only to unleash gunshots and comeuppances with bang-bang seriousness.

In the end, Hostiles proclaims itself a transformative frontier expedition that cultivates tension, aims true and ties relations from 2018’s simmering anger to 1890’s same two-sides mentality. You’ll get your six-shooter crossfires and outlaw justice, but never glorified or praised. As Captain Blocker pushes deeper into his quest, the futility of their standoffs weighs heavier and heavier. Men fighting against men because people of different skin colors walk their land, rifles drawn simply for stepping on the wrong blade of grass. Scott Cooper knows the film he’s making, and it’s no dusty beaten-path retelling. At the least, it’s a plea for history not to repeat such hate – with plenty of gut-check thrills and perilous storytelling to heighten the mood.