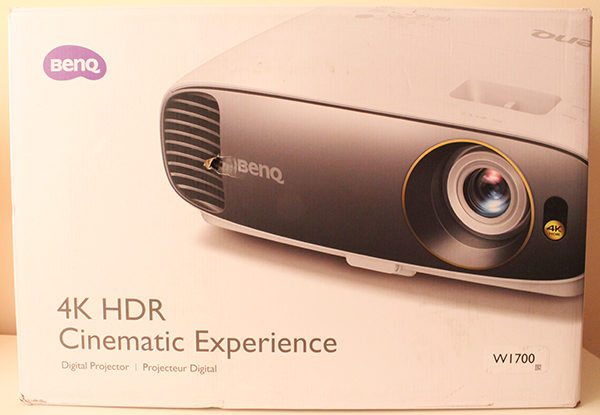 With your typical 4K projector costing anywhere from £5,000 to £25,000 (or more), BenQ is set to bring the world of Ultra High Definition to home cinema enthusiasts everywhere with the release of the BenQ W1700 4K HDR CineHome Projector, an affordable piece of kit which promises to bring the cinematic experience to your living room. I was lucky enough to get my hands on the W1700 from BenQ to give it a test spin, and I can say without any hesitation that it really delivers on this sales pitch and is a mighty impressive piece of kit.

Now, I’m not any kind of tech guru, and I’ll be reviewing this as your average cinema enthusiast. If you’re looking to get an in-depth analysis of what’s under the hood, then I’d direct you elsewhere (StereoNet seems a good shout). With that being said, here’s some of the projector’s key features:

The projector itself has a rather sleek and smart design, and weighs a little over 4kg. Cooling fans are located on the front and sides of the unit, while we also have a focus and zoom lever allowing for a 1.2x zoom. On the back, we have various inputs: HDMI-1, HDMI-2, D-sub (both 9pin and 15pin), USB Type A and mini B, and mini jack audio in and out. The project itself comes with a power cord, lens cover, remote control (with a very handy and welcome backlight) and battery, CD user manual and quick start guide. Unfortunately, there aren’t any 3D glasses included, so if you’re planning to make use of that feature, you’ll need to pick some of those up. 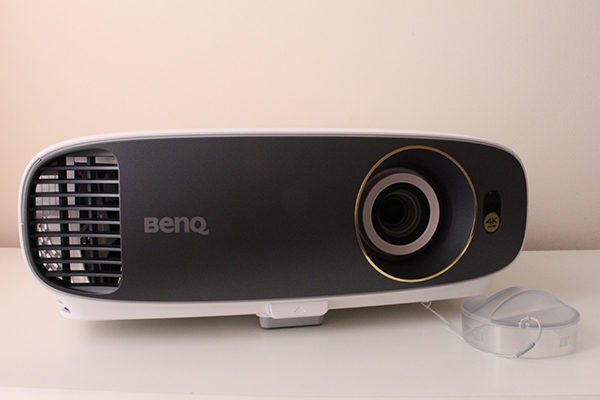 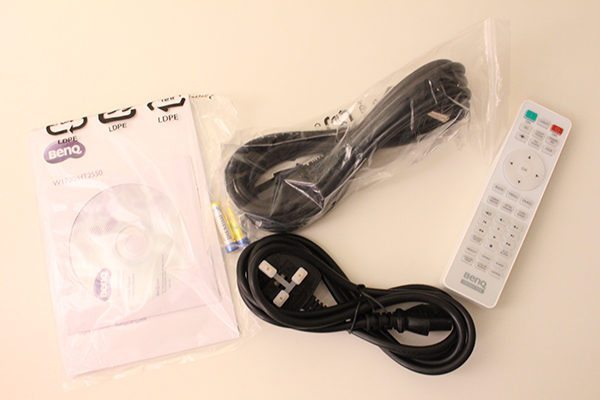 I’ve been slow to jump into the world of 4K, mainly because I haven’t been impressed with what I’ve seen before. I do have a 4K TV (60″ LG) and a 4K Netflix account, but beyond a handful of YouTube videos, I haven’t been blown away by what I’ve seen compared to upscaled Blu-ray – certainly not enough to invest in £200+ in a 4K Ultra HD Blu-ray player, and an extra £10 per disc. However, the BenQ W1700 may just have changed my mind.

Watching Netflix’s 4K content such as Daredevil on my TV, I’d say there’s a small improvement over 1080p, but definitely not that kind of “wow factor” we experienced with the jump from SD to HD. But playing it through the W1700 with HDR enabled, on a 90″ screen (my living room is small, or I’d go bigger!), the content looks simply incredible. The images are striking and crisp, the colours vivid and rich, and the picture is just so much more satisfying overall. A 4K Blu-ray player and an Xbox One X or PS4 Pro are now certainly high on my shopping list. I need to experience more of this, and fast. The term ‘stunning’ really doesn’t do it justice.

While 4K HDR content is surely what you need to get the very best out of the W1700, I’m not overly keen on investing hundreds to thousands of pounds rebuying many of my favourite films in the new format. Fortunately, the projector also does a fantastic job with 1080p Blu-ray content (and even the trusty old DVDs hold up well). 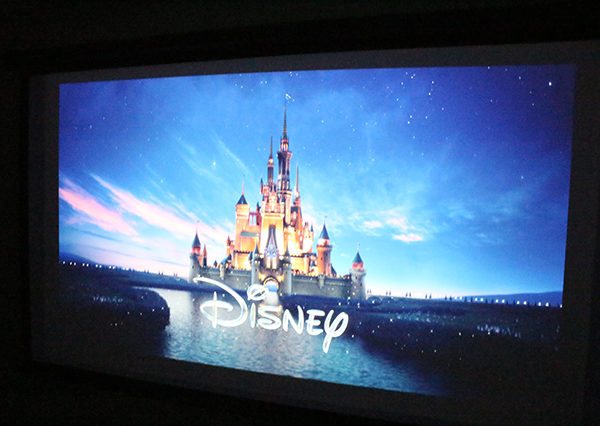 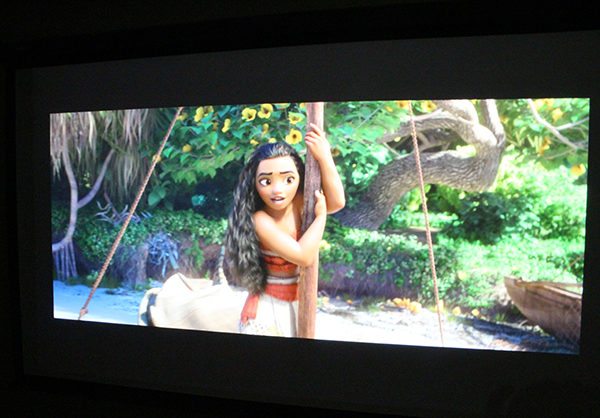 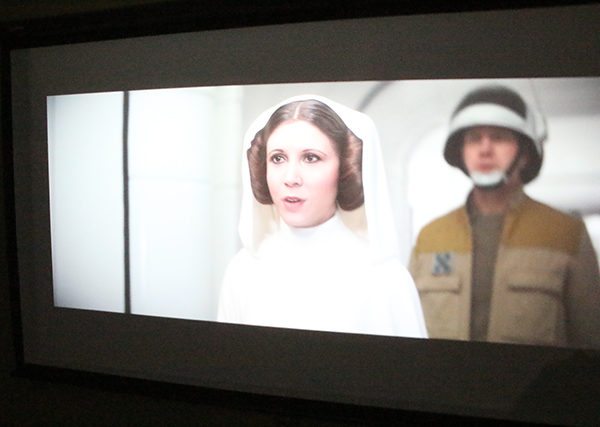 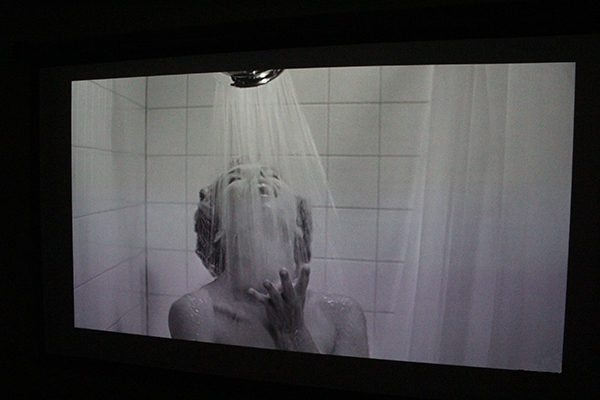 I’ve tried out a number of Blu-ray movies over the past week – Star Wars: Episode VI – A New Hope, Rogue One: A Star Wars Story, Star Trek Beyond, Moana – and again, the picture quality is nothing short of superb. The colours are vibrant and rich, and it feels like there’s just so much more detail on display. One particular scene that stood out was the climactic Yorktown sequence in Star Trek Beyond; I was actually blown away by the attention to detail – something I’d never really picked up on with my TV, or even in the cinema – and felt like immediately watching it over again just to focus my attention on different parts of the screen.

Now, I’m not much of a gamer (I’m semi-retired, after being a little disappointed by the next-gen machines), but I couldn’t resist taking CJ out for a spin in Grand Theft Auto: San Andreas on my PS4. Granted, graphics-wise this probably isn’t the best choice of title to test drive the W1700, but nevertheless – driving around Los Santos on a 90″ screen really is a blast! I’m actually tempted to give a few more games a go, but if the 4K HDR image quality is any indicator, I think I’m going to hold off until I pick up one of the newer models so I can really appreciate the very best they have to offer.

It would have been nice to test the W1700’s 3D capabilities (which, seemingly, are restricted to 1080p), but sadly the projector doesn’t come with any glasses, and features active 3D, whereas my TV is passive. Needless to say though, given the fantastic quality of the 2D images, I will be investing in these in the very near future. 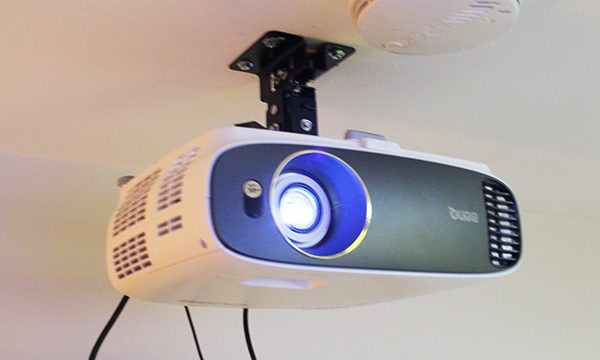 Overall, I’m thoroughly impressed by what BenQ has delivered with the W1700. Just like it says on the box, it really does deliver the cinematic experience in the comfort of your own home. There’s only three downsides for me: 1) I now just want to sit and watch movies… like all of the time; 2) my wallet is going to take a pasting upgrading to 4K UHD Blu-rays; and 3) my TV just doesn’t cut it any more.

At its price point of around £1500, the W1700 delivers excellent value for money, and I honestly can’t recommend it enough. If you’ve been considering setting yourself up a home theater – or upgrading your existing equipment – and you have the money to hand, then go out and get one of these today. And if you don’t have the money, start saving. You will not be disappointed.