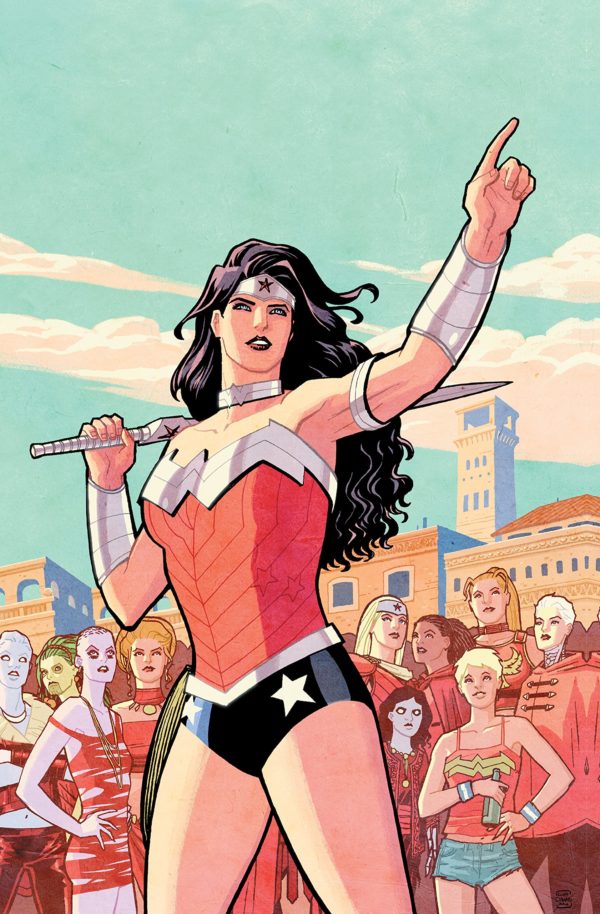 DC is continuing its Wonder Woman high by releasing the next volume of Brian Azzarello and Cliff Chiang’s New 52 Wonder Woman in their prestigious Absolute format. Collecting the latter half of their run, Absolute Wonder Woman by Brian Azzarello and Cliff Chiang Volume 2 showcases Diana at her best while introducing a new (if brief) status quo as she takes her place among the Olympic gods. Meanwhile, Zeus’ secret First Born child seeks to fulfill a prophecy that will place him upon the throne, leading him to all out war between Diana and her allies in an exciting and gripping story.

Picking up where Volume 1 left off, Diana is still protecting the baby Zeke, Zeus’ latest bastard child at the centre of this prophecy, from the clutches of several parties who wish to gain control of Olympus. The primary antagonist, though, is the First Born and Azzarello does much to further establish his threat level fairly quickly. First Born is an interesting villain and one not without a small amount of sympathy after the way Zeus and the other gods have treated him. One chapter in particular does much to flesh out his backstory, showing he’s more than a typical one-note style villain who only has one goal in mind.

Azzarello also captures Diana’s spirit very well throughout the story. Her compassion is at the forefront of her character, especially with other characters who she has an uneasy relationship with such as Orion or War. She even tries to show compassion to First Born on a few occasions to no avail. However, she is also depicted as a great fighter and leader as Azzarello gives her many moments to shine in this regard, showing she’s not one to mess around.

When it does come to Diana’s compassion, however, one of the big themes of Absolute Wonder Woman is one how it is truly earned. Various characters throughout Azzarello and Chiang’s run betray her or abuse her compassion in one way or another, making her look a bit like a chump. It almost makes her look very naive that she keeps making the same mistake over and over again. Thankfully, this starts turning around towards the end of the book as her compassionate nature starts to payoff, especially in one big moment that is an excellent callback to one of the earlier chapters from Volume 1, and she brings together a host of characters who would normally not get along at all. Hera in particular is a testament to Wonder Woman’s faith after starting out trying to kill Diana and all of Zeus’ bastards only to have come around as a parental mother figure to Zola and Zeke.

There is plenty of action to go around in this volume that explodes in the climax. Cliff Chiang outdoes himself during these sequences, balancing battles on multiple fronts and shifting between characters very easily. Chiang is very detailed with his images as he puts in so many different characters, soldiers and other background events into his art. His depiction of Wonder Woman in her battle armour is a pretty sweet one, but First Born is downright disturbing in the latter part of the book. Chiang makes him look horrific as he basically becomes a walking, skinless burnt monster more than a man. His art is helped by colourist Matthew Wilson, who uses a lot of vibrant colours and makes the battles and First Born’s vision of Olympus look truly hellish.

Absolute Wonder Woman by Brian Azzarello and Cliff Chiang Volume 2 completes a run that was one of the best of The New 52. Their partnership was one of the few that sustained DC’s reboot with the same creative team for the majority of The New 52’s time that introduced new elements (some of which were controversial) to Wonder Woman’s mythology while still showcasing everything great about the character and her world. They tie up all the plot elements and loose ends very neatly, completing a story with a lot of emotion, great battles and heart. Any fan of Wonder Woman and of this team in particular will enjoy the last leg of their Wonder Woman run.