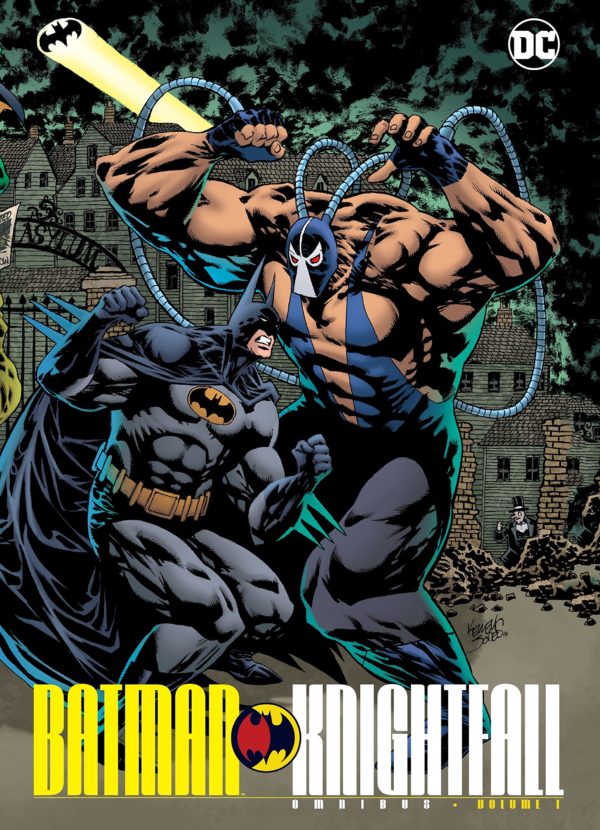 One of the most seminal moments in Batman’s history came in the early 1990s with the introduction of a new supervillain, Bane. Wishing to control Gotham City, Bane attacked Batman in a unique way by pushing the Dark Knight’s psychological and physical limits by putting him through a gauntlet of Gotham’s deadliest villains. The story culminated with Bane breaking Batman’s back, forcing a replacement to don the cowl and protect Gotham City and being remembered as one of the most memorable and controversial moments in his publishing history. Batman’s defeat by Bane has been an event adapted in several forms, from animation to video games to Christopher Nolan’s concluding Batman film The Dark Knight Rises.

Its perplexing, then, that DC has never collected the full Batman: Knightfall story before. There have been several collections, but all have missed on some important issues of the massive crossover that tell more of the story. Now DC has finally committed to collecting the full, complete story in Batman: Knightfall Omnibus Vol. 1.

Knightfall begins with the origin of Bane and how he grew obsessed with Batman. It wouldn’t be easy to create a new villain for Batman after so many decades in print, especially one that would have a lasting impact, but writers Chuck Dixon and Graham Nolan did just that for Bane. He may be remembered for his brute strength, but the most interesting aspect about him is his deadly intellect, making him a perfect foil for Batman as he plans a logical and deadly attack against Batman. Its a shame, however, that not many stories since Bane’s introduction have recaptured the magic and intrigue of Knightfall, but that also speaks to how great Bane was presented here.

Dixon is joined by Doug Moench and Alan Grant on the writing side, rotating chapters in the story. Each one has a good handle on Batman, Robin, Azrael and the rest of the cast. They do a particularly great job on Batman’s deteriorating mental and physical state throughout the story. Coming off so many struggles – Jason Todd’s death and his brief addiction to Venom to name a couple – Batman’s strength is stretched thin when he hasn’t given himself time to rest and recoup. It only gets worse with each villain he faces, increasing his fatigue. It definitely makes you feel a lot of sympathy for Batman and creates some good emotion as he pushes through it all, culminating in his memorable fight (if you can even call it that) against Bane in the Batcave.

After that, the story continues with Jean-Paul Valley, aka Azrael, taking up the mantle upon Bruce’s request. Azrael was a former member of the Order of St. Dumas, a powerful cult, who Bruce had been helping after his brainwashing and battling his inner demons. However, those demons catch up to Azrael as he becomes a very brutal Batman and comes close to crossing the line in his battle against Bane. Again, Dixon, Moench and Grant do a good job detailing Jean-Paul’s struggles and descent into madness and violence.

Thought it takes a while for the omnibus to get into the Knightfall story, the great thing about Knightfall Omnibus is that it includes, for the first time, a lot of the missing issues that precede Knightfall and the real start of Batman’s failing state. It definitely adds quite a bit of context now that’s its added and expands on Bane’s operations in Gotham as he began his long, drawn-out plot against Batman. These additional stories give a bit more meaning behind Batman’s fall and Jean-Paul’s own failure to combat his demons. Its the most complete telling of Knightfall fans have ever been given.

The art is done by multiple artists throughout the book. The main artists whose work is featured are Graham Nolan and Jim Aparo. Their styles are fairly similar so the artwork stays consistent enough when it switches between them. There are some styles, though, such as Klaus Janson’s, that don’t quite match and give an inconsistent look and feel to the book. There is some fairly rough artwork later on that doesn’t gel at all with what’s come before and some pretty typical 90s imagery, but for the most part the art is well done for the time. There are plenty of great images and splash pages that are memorable, such as the sequence of Batman losing it on The Joker, the first look at Azrael’s version of the Batsuit and, of course, the image of Bane breaking the Bat. Included are a few character sketches, designs and several variant covers.

For Batman fans, whether they are collectors or just plain fans, Batman: Knightfall Omnibus Vol. 1 is an essential piece of Batman history. It introduced one of his greatest villains and had consequences for years to come, but this book does a great job of at last collecting the full story on one of Batman’s darkest hours. Whether you’re a new fan or just want to take a trip down 90s lane, you’ll enjoy Knightfall.