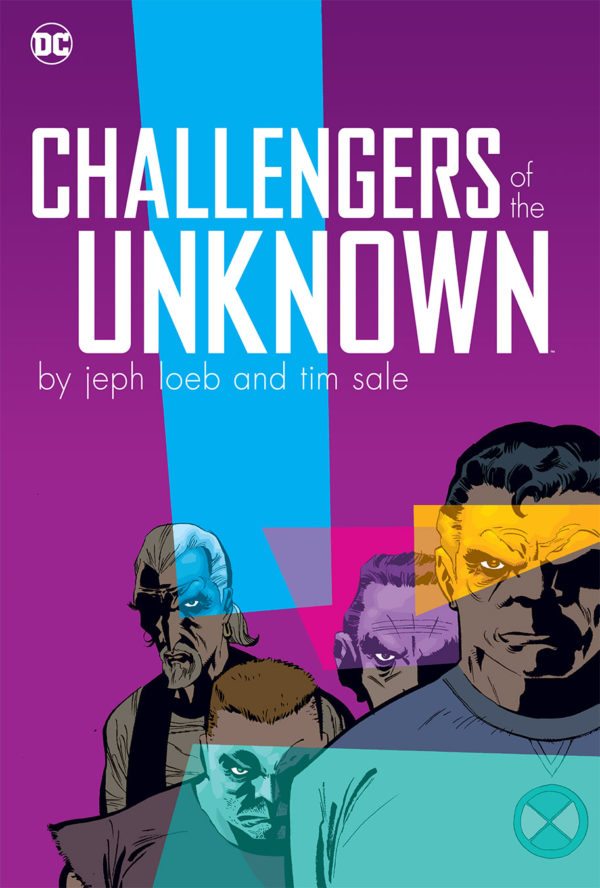 Jeph Loeb and Tim Sale are two favourite names among the comic book industry. The pair have made several great series over the years together, from the classic Batman: The Long Halloween, Catwoman: When in Rome and Superman: For All Seasons. Their very first project, however, was long before any of those series and told a story about a group of relatively, ahem, unknown heroes in the DC universe: the Challengers of the Unknown. Now DC has collected this series once again in The Challengers of the Unknown by Jeph Loeb and Tim Sale Deluxe Edition.

This book sees the Challengers of the Unknown, a small group of scientists and action heroes who delve into crazy mysteries and adventures, disbanded after their base of operations suddenly explodes. With most public opinion against them, they go their separate ways even as a dangerous entity threatens all life on Earth. As weird events mount across the world, the Challengers must come together once again to stop the spread of death and chaos.

Its a very risky move to make one of your first projects around a team of heroes that was popular in the 50s and 60s, but not so much since. Loeb reinvents the Challengers for the modern age (or at least modern to the 1990s) and tackles the issue of their age very well. One of the biggest themes in the book is the Challengers are “living on borrowed” time and compared to the other heroes of the DC universe, such as Superman, Batman and other heavy hitters, the Challengers just aren’t that special or worthwhile anymore.

Loeb taps into each of the Challenger’s personalities very well and shows they are very different people. Each one reacts to their forced retirement extremely differently, from depression to rage to an existential journey. Its interesting to see Loeb play with so many different character arcs, he balances them quite well and manages to bring them together in a fine mix by the story’s end. Not one of the Challengers is given prominence over the other, making all their stories vital to the overall story.

One of the drawbacks, though, is that the Challengers spend so much time apart that those unfamiliar with the group may find themselves a bit lost in their history and function as a team. The Challengers are only really together for the first two chapters before going their separate ways until the climax so Loeb relies on some exposition to get across their strong relationships and how some of them felt they were more a family than a team. For the most part Loeb succeeds, but it may have help emotionally to have the team together a bit longer so readers, especially new ones, would understand just how devastating their disbandment is for them.

Those who know Tim Sale’s past artwork will already know what a fantastic artist he is, but its amazing to see that his first collaboration with Loeb produced some of the best visuals he’s ever created. Sale’s experimentation with the layouts yields some striking visuals throughout the book, making the reader follow along with the action or just plain quiet moments, allowing us to see the many emotions the characters feel in the span of a few panels. Lovern Kindzierski’s colours compliment Sale’s art very well too, helping his visual standout by using some vibrant colours throughout the story. Sale’s artwork is without a doubt a huge selling point of Challengers of the Unknown.

Though this book follows a group of relatively unknown heroes, Jeph Loeb and Tim Sale do great work reinventing these characters and tapping into their personalities and insecurities. Though there could have been a bit more of a focus on them as a team prior to their split, the pair still does a great job representing how lost each of them are without their makeshift family. Challengers of the Unknown by Jeph Loeb and Tim Sale is a great read that highlights how compatible they were as a writer and artist before their other high profile works.