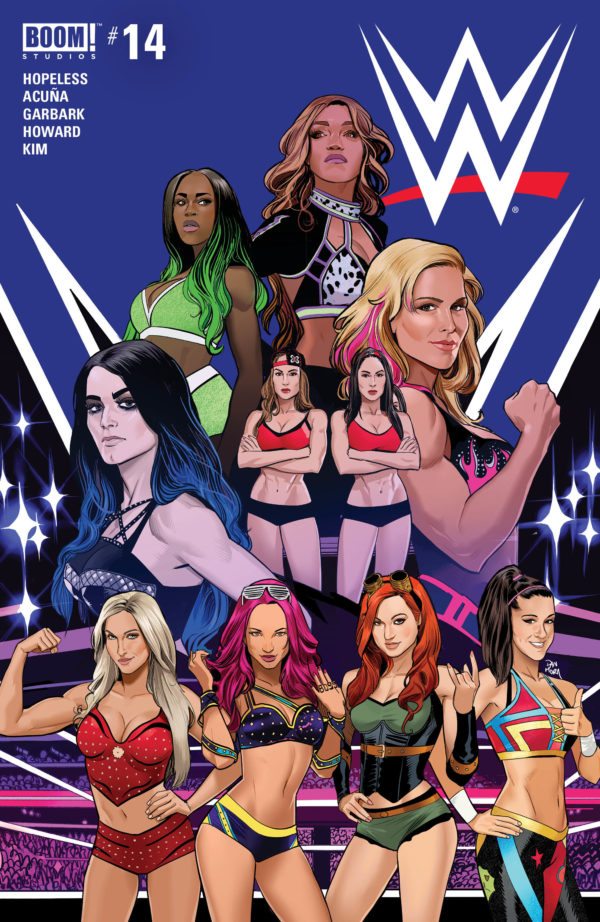 Following last month’s successful Women’s Royal Rumble, and the debut of Ronda Rousey following the match, the Women’s division in the WWE has never felt more important than it does now. With the first ever Women’s elimination chamber on the horizon, and the division likely to get a lot of attention at Wrestlemania, now seems like the perfect opportunity to release the first edition of Boom! Studio’s WWE comics based solely on the women of the WWE.

The comic series has spent the last 13 issues focusing on the storyline surrounding the rise and fall of The Shield, and it now looks as though the Women’s Evolution is going to be their next big on-going project. The first story in this issue tells the story of the Four Horsewomen of NXT, Sasha Banks, Charlotte, Becky Lynch, and Bayley. More specifically, however, it focuses on the debut of the other 3 women from Bayley’s perspective, with Bayley, of course, being the last of the 4 women to make her main roster debut.

One thing these comics have often excelled at is padding out on-screen stories with other kayfabe events in the wrestler’s lives. In the previous comics, we saw the effects The Shield break-up had on every member individually, and while there may have been some mixed results, in general, these were great additions to the stories. Writer Dennis Hopeless does an even better job in that department with the women. We see the four horsewomen meeting in NXT at the first time, and watch as Full Sail becomes a home from home for the young aspiring athletes, each of whom are given their own unique personality. This really adds to the story and makes it feels all the more upsetting when Bayley is rejected as her friends go up to Raw and Smackdown.

Bayley is the beating heart of this, and it is her story to tell here. We watch Bayley battle harder than ever before to earn her call-up to the main roster, and it is a nice reminder of the character she should be portraying week in and week out on television. There are plenty of avenues for Boom! Comics to explore with the Women’s revolution, and let’s hope that the series can be as consistently strong as this is.

Series regular Serg Acuna returns to the artist duties here and once again, does a great job of capturing the likeness of the superstars. We even get a brief cameo from the Nature Boy Ric Flair in an amusing panel.

The accompanying story ‘though she be but little, she is fierce’ tells the kayfabe story of Asuka’s arrival in NXT. We see murmurs of talk backstage about a Japanese superstar arriving to wreak havoc, as Asuka hides in plain sight, listening to all of her victims as they talk her down. It’s a nice little story and there is some good artwork in there. The story ends with a ‘to be continued’, and with Asuka currently having a rocket strapped to her back on the main roster, you can expect them to continue to document her stories in the upcoming comics as well.

This was one of the strongest editions of WWE comics for some time. Hopeless and Acuna do a great job of paying tribute to the early days of the Women’s Evolution and I for one, can’t wait to see where they go with this saga next.