Alex Moreland chats with composer Anne Nikitin about her latest score on American Animals, her creative process, and more… 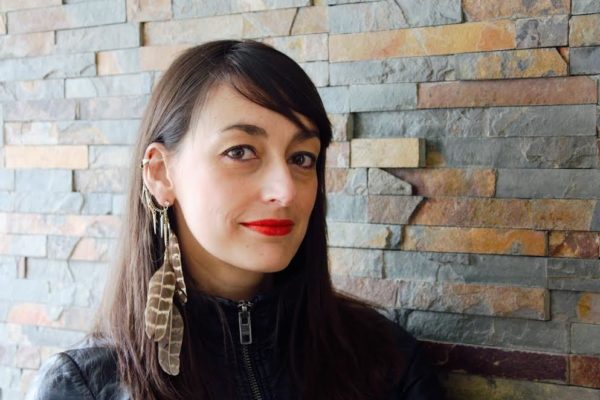 How did you first get involved with American Animals?

I worked with Bart before, on a film called The Imposter, about six years ago now, it’s a film that went to Sundance. It was a documentary but a bit of a hybrid drama doc. And then when he … this is his second film, so he brought his team back on board including me, so that was really good.

What’s it like, working with Bart? Do you have quite a collaborative approach or …?

Yeah, it’s very collaborative. He sent me the script for American Animals in the early days, so I’ve been involved from the very beginning. I created a series of demos for him even before he shot the film. Some of those demos were thrown away, but other ones stuck, and became main themes for the film. We were already having conversations about themes and what kind of score he was after, even before he shot the film.

We’ve got a really great working relationship. He’s the most incredible director, in my opinion. I think he’s very bold, he likes to push boundaries. He does work you hard. He takes you on a journey and he really pushes you to the limit and he really challenges you. It’s not an easy journey, but I feel like it’s worth it. He’s very gracious as well in his demands. It’s a joy to work with him.

Can you tell me a little about, kind of the music and sort of the sound style for American Animals?

Yeah, it’s a really eclectic score. That was one of the things we talked about early on, because the script is so multi-layered, we knew that the score would be multi-layered. Firstly, the film has these got four very vibrant, strong characters so they each need a piece of music to characterise them. Or is that caricature in a way, when they’re introduced. I’ve written something for them.

Then there’s lots of themes in the film; the themes come more from what the characters do and how they feel rather than specifically stuck to them. Then the film is also a nod to other genres – so it’s a movie within a movie – but pays homage to a whole range of heist movies from the olden days as well as films like Ocean’s Eleven. So, the music also pays homage to those, so it’s a really eclectic score.

The trick was to create this diverse score, but also make it sound homogeneous and consistent, because it was in danger of sounding too bitty. I hope we’ve done that. It’s basically, we’ve got orchestral bits, we’ve got avant-garde, we’ve got Cent beats and guitars going, we’ve pretty much got everything in there.

When you’re working, as part of your creative process, do you start with those character motifs? Is that how you begin to build the score?

Yeah, exactly. So, for this one, I tended to try to come up with themes based on the characters or the ideas that run through the film.

I also enjoy asking directors to provide a sort of playlist of tracks that they think would work for the film. It could be any genre, any style, doesn’t necessarily have to be soundtracks. Like Bart and I were playing, as well as soundtracks, playing a lot of bands like Sonic Youth. That’s what I like. I like to hear a range, a palette of what the director is after. Then talk about the script, you talk about the film and come up with themes that way and then develop the score through that. 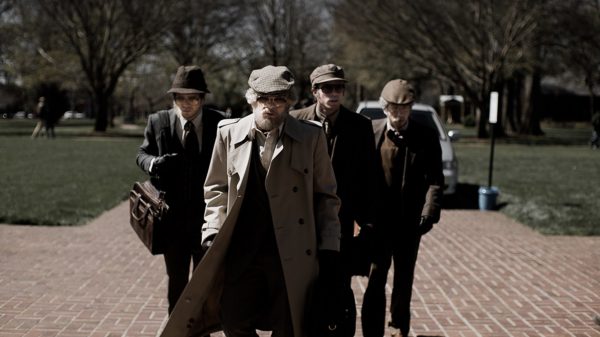 Across your career, you’ve composed for a lot of different genres. Action thrillers, temotional dramas, and documentaries, which I thought was quite interesting in comparison to fiction films. Do different genres present different challenges in terms of your work?

I tend to approach them all in the same way and I found, less so now, but in the early days I started off doing a lot of documentaries. There was this sort of stigma that I couldn’t do drama because I was a documentary composer and it works in the opposite way, you know.

I once went to an interview for a documentary and they said, “Yeah we didn’t want a drama composer, because we didn’t think they could do a documentary.” I found that very silly, because myself and I’m sure other composers, we tend to approach it in a similar way. It’s about getting to the themes of the film, whether it’s a fiction or a documentary. It’s about getting to the heart of the film and establishing emotion – enhancing emotion I should say – so for me it’s all quite a similar approach.

Do you have any idea why that perception of documentary composers not being able to do dramas, and vice versa, exists?

Well, I think documentaries have come through a renaissance at the moment. They’re made in a way that is a bit more dramatic than they may have been in the past, and similarly dramas are being shot in this kind of hyper-real way as well. You know the shaky cameras and it’s almost hand held, that’s almost documentary style. I think within those genres the lines are blurring already. I think the approach for music is now similar to both, whereas in the past, I think documentaries were very differently shot and realised than dramas. Back then, for a lot of documentaries, composers would literally supply a library of music.

Now I’ve met a lot of composers who did that many years ago, simply providing library style music and then the editors would put them into the documentaries. They didn’t really score it ‘to picture’ the way you would with a drama. That’s all changing. People are scoring documentaries ‘to picture’ now the way they would with a fiction film.

On a similar note, I know you’ve done both film and television, as well as short films. Do you have a preference in terms of which format you score for?

I do love feature docs and feature dramas – feature films in general, fiction or drama. I also do love TV series, drama series. I do like a mix and I love nature documentaries. I guess I don’t really have a preference. I like the mix and keeping it interesting that way. I like flitting from one project to something completely different.

You can definitely see, looking at your career, that you jump around a lot. Something I was wondering about: You scored Freistatt, a German language film. I know you’ve lived in lots of different places around the world, and there’s different international influences on your work. Is there a difference in the style of music you produce, depending on the language the final film will be in? Or is that a silly question?

No, it’s an interesting question. For instance, with Freistatt, it was similar to how I would score a film in the UK. The director had very similar approaches as to how I would work with a British director.

The language was a little bit of an issue, because it was pre-subtitles – the cuts I would get were before they would put subtitles on. Luckily, I speak a little bit of German, I could just get by what they were saying. I did think to myself, if I didn’t speak any German and I didn’t have a clue what they were saying, this could have been a real challenge for me! Also, the director also lived in Germany, so I only met him once at the beginning of the editing process.

On another note, what would you say your chief musical influences?

I suppose when I was growing up I listened to a lot of Rock and Indie music. I wanted to be in a band, as I think every teenager does. I wanted to be part of the Riot Girl movement, I think they had a massive influence on me.

Then I went to see a film called The Piano with the score by Michael Nyman. I thought, well this is a completely different genre and I absolutely loved it. I thought instead of being in a Rock band, I’d like to write music like Michael Nyman and put it into a film. That influenced me into going into film music, film scoring. Then a whole bunch of avant-garde composers I studied at University, I was kind of obsessing over. Then soundtracks now, I just really love listening to soundtracks and new bands.

I feel that film music at the moment is really exciting because it’s drawing on everything at the moment. It’s just filled with all sorts of musical genres, from Rock to Jazz to Electronics since 80 Cents has had a revival. Avant-garde music as well. I feel it’s a really exciting time. 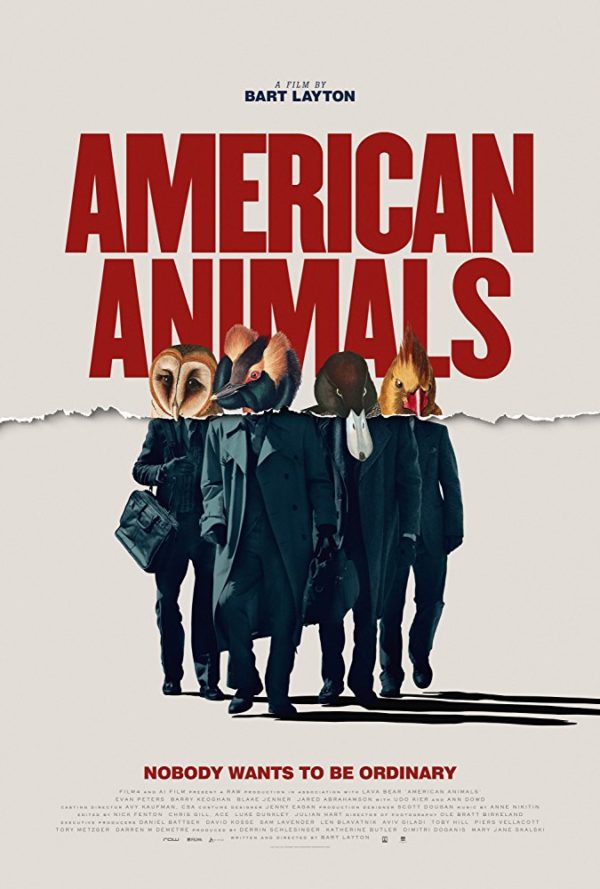 You mentioned that you’ve got your Masters degree in Music Composition for the screen. I was wondering, how do you think that’s shaped your outlook and your approach?

I basically wanted to do the degree because I finished a Composition degree, a Bachelor of Music, and it was a Composition degree and we focused on hard core avant-garde music. It was very niche genre. I came out of that degree thinking I really still want to go and do song music. I had no idea how to approach it and I thought, I’d better pick a course. I had no idea about software or how to literally put a piece of music to the film, technically. Or how to meet anybody.

I went on that course and it was absolutely brilliant in giving me the tools to be able to score to picture and also meeting young film makers. We had to collaborate a lot and practise on short films and animations. I definitely think it gave me all of the tools I needed to become a composer for film and TV. I did expect to land my first job as soon as I graduated. It didn’t happen that way! It took many years before I finally got a paid commission. It kind of gave us all a false sense of optimism, doing that course. I wouldn’t look back, it really did help me.

I’m working on two series for Netflix, they’re true crime series. They’re in the early stages at the moment and I’m afraid I can’t give away too much.

Finally then, what’s the most important thing that you’d like someone to take away from your work, both in general and on American Animals?

Oh, that’s a tricky question. Just to show the variety of work I can do. I’ve always had, and now talking to other composers, had a sort of hang-up that I didn’t have my own singular voice that was instantly recognisable as being me. I think that, you look at some of the Hollywood composers like Thomas Newman or Hans Zimmer, you instantly recognise their music.

I know myself and my composer friends, we always talk about that. Do we have a voice and what is it? Are we instantly recognisable? I’m thinking, I bet mine’s not being instantly recognisable. I much prefer being able to write in a variety of styles. I find it much more fun and adventurous and challenging.

American Animals was definitely a challenge. I think I’ve learned a lot about myself and my writing approach just through American Animals, really, and being a bit more confident with my writing.

Anne Nikitin, thank you very much!