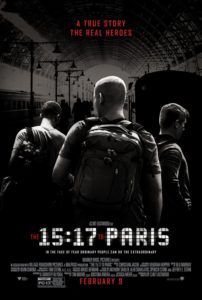 Three Americans discover a terrorist plot aboard a train while in France. 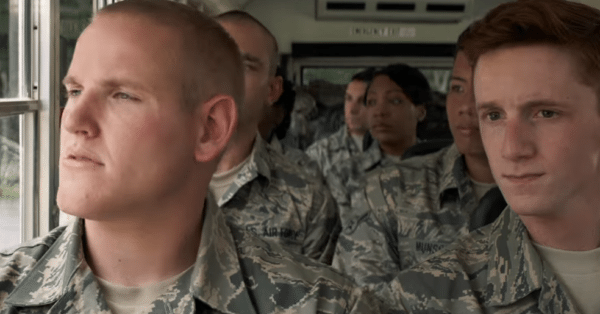 Depending on who you talk to, Clint Eastwood is riding the waves of success lately by consistently (it seems as if he has a new movie every year) shining the spotlight on different variations of working-class American citizens, whether they be directly involved with the military (the polarized but undeniably intense American Sniper) or everyday professions such as airplane pilot Sully unexpectedly stuck in a perilous situation requiring him to pull off a miraculous act of heroism. The same framing applies to his latest directorial effort The 15:17 to Paris as it follows the lives of three tightknit friends vacationing around Europe in between their daily duties (they involve Armed Forces positions alongside mundane jobs) who utilize their lifelong brotherhood to neutralize a terrorist carrying roughly 200 rounds of assault rifle ammunition on the titular train ride, except instead of attaching big-name Hollywood stars such as Bradley Cooper and Tom Hanks to the project Clint Eastwood has decided to experiment by tasking real-life heroes to assume the roles of their counterparts.

When it comes down to it, whether The 15:17 to Paris intriguingly functions or not is determined by this unorthodox creative decision, and unfortunately, I have to report that the results are a mixed bag. Coming as a surprise to no one that actually watches movies and takes them even the slightest bit seriously, the performances from the trio of American heroes (there is also welcome diversity among them, with one containing roots all the way back to World War II Germany via relative that fought for the good guys, and an African-American) are wooden. It’s also critical to note that the actual terrorist incident doesn’t occur until the last 15 minutes of the film (occasionally, there are very brief flashbacks meant to entice the viewer and encourage them to stick around for the main course), meaning that what audiences primarily observe is the friends globetrotting around Europe with shaky documentary reminiscent cinematography. In that regard, it’s not inaccurate to say that The 15:17 to Paris succeeds better as a European touristic attraction rather than a look at average-Joe bravery.

Anyway, the interactions between regular citizens/travelers Spencer Stone, Alek Skaraltos, and Anthony Sadler are often uninteresting, basic conversations meant to mask that these are untrained actors in a major motion picture who realistically cannot handle elaborate dialogue or extended exchanges (there are numerous amounts of cuts, as if Clint Eastwood was only able to film a sliver at a time, and accounting for the speed at which he cranks out films it’s safe to say that there probably weren’t many reshoots). Additionally, any time the script (written by Dorothy Blyskal and based on the book from the three amigos themselves) does give them meaningful passages, it is awfully cheesy, unable to reflect words that real human beings would actually speak. Spencer is given more focus than any of the other friends, resulting in scene after scene showcasing different points of his life, typically where he is down on his luck, so the script decides to implement one too many speeches about life catapulting him towards a very specific, heroic moment. It’s laughably bad writing under the impression that viewers will immediately find some subtext just because it is acknowledging the inevitable fight or die life-changing machismo.

Oddly enough, The 15:17 to Paris is actually engaging during the quick first act that explores how these people met as children and bonded to become a brotherhood. Now, that isn’t because the middle school child acting is good; it’s actually rather bad and more disorienting than the adult nonactors. Instead, what’s to appreciate are character development moments that push these people towards the desire to battle on the front lines for their country one day. One such particular moment sees the children toying around with paintball guns in the woods, a sight that may disturb some viewers (there seem to be a lot of dangerous firearms left out in the open due to the broken home atmosphere that these children, aside from Anthony, inhabit). Jenna Fischer and Judy Greer play single moms to two of the children, frequently instilling religious Christian values into them alongside scoffing at higher-ups within the school’s Board of Education that are under the thinking that the kids possess some form of ADD and should be treated with loopy medication. With limited screen time they certainly make an impression, and whether you want to criticize their parenting or not, it allows us to see where the boys’ infatuation with serving one’s country comes from. 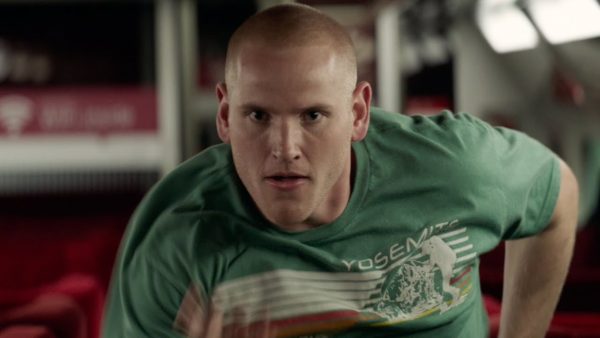 Still, The 15:17 to Paris is a wonky, unstable ride (no pun intended, those are just the words that came to mind) that wanders aimlessly through childhood bonding and adulthood European vacationing until finally arriving at the moment of heroism everyone coming into this experience is waiting for with bated breath. This is also Clint Eastwood’s wheelhouse, allowing him to deliver a singular, violent and traumatic sequence that pushes the boundaries of the PG-13 rating. Human flesh is stabbed, firearms are forcefully slammed into faces with blunt impact, an innocent passenger is rendered a bloody mess before our heroes spring into action (also played by real-life counterparts), and lives are forever altered. The closing moments will absolutely ensure you salute these brave men, but the preceding 80 minutes are a boring, failed experiment.