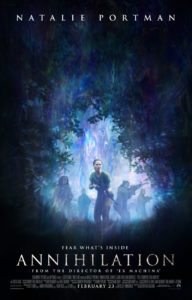 Lena, a biologist and former soldier, joins a mission to uncover what happened to her husband inside Area X – a sinister and mysterious phenomenon that is expanding across the American coastline.  Once inside, the expedition discovers a world of mutated landscape and creatures, as dangerous as it is beautiful, that threatens both their lives and their sanity

There’s no point in beating around the bush (or in this case, dancing around the shimmer); Annihilation (written and directed by Alex Garland ,who blew viewers away with his directorial debut Ex Machina to the point where a surprisingly close to release press screening and strict embargo date for his follow-up effort never once let doubts of its quality settle in my mind, and based on the first novel of the same name in a trilogy by Jeff VanderMeer) is high-minded science fiction where only those who actively enjoy thinking about and dissecting multiple themes need only apply.

To be fair, the first 90 minutes or so are challenging with provocative imagery, philosophical discussions (a particular conversation regarding the semantics of suicide and self-destruction is a standout point of reference to bring dynamics of the character relations and overall plot back to), and mutated beasts ripping apart members of the all-female expedition (I got news for you if you thought the grizzly bear that mauled and left Leonardo DiCaprio for dead in The Revenant was a scary force to be reckoned with), but always manageable to understand on a surface level. And then the ending lighthouse segment comes and fries your brain, but with just enough material to begin putting together this marvel. Annihilation‘s brain-melting moment of truth (the scientists capable of handling military grade weapons are uncertain as to whether the blindingly bright “shimmer” forest they have signed up to investigate following past unsuccessful male centric expeditions –  yielding no results and all soldiers missing –  is a religious phenomenon or the work of extraterrestrial life forms or some other unexplainable spectacle) is hypnotic, so much so that I forgot entirely that the story opens up in medias res letting us know that Natalie Portman’s protagonist Lena, who is searching for clues as to what happened to her year-long gone husband (Oscar Isaac, who danced his ass off to epic meme status recently working with Alex Garland) actually survives the journey. Of course, there are still plenty of questions and points of debate, but it’s a testament to how truly freaky and unsettling the Lovecraftian tone gets.

The rest of Annihilation is also highly intriguing, most notably in the visuals department (which are even more impressive considering the budget is slim but with effects that put some major blockbusters to shame). Opening up the film is Lena giving a biology lesson to college students on cell structure which becomes another roadmap to making sense of the overall narrative. While exploring the luscious green forests, the crew come across a series of flowers with the science-defying catch that they are all different types blossoming from the same singular cell. As the film continues, more genetically curious creations crop up including human reminiscent bodies. It’s important to note that this confusing display of nature isn’t annihilating anything; if anything it feels like the environment is reclaiming itself (strikingly similar aesthetically to the brilliant apocalyptic video game The Last of Us). 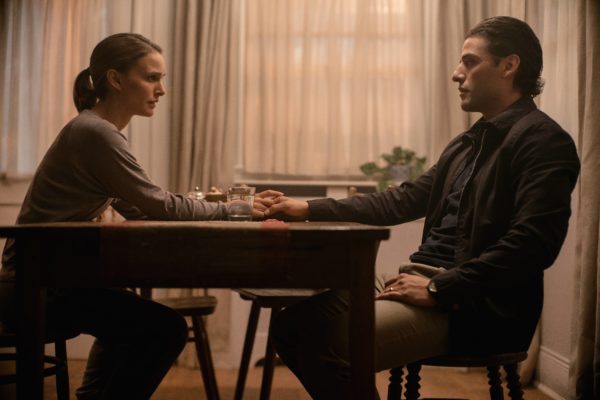 It’s also pleasant to report that while the majority of the characters will simply be known for the skill quality that determines the purpose of their tagging along the mission (psychologist, medic, anthropologist, so on and so forth), there’s a reason each of them is essentially signing up for inevitable doom, and it all comes back to that aforementioned dialogue contending suicide vs. self-destruction (strongly acted between Natalie Portman and Jennifer Jason Leigh). Lena’s situation is similar but different; without spoiling anything it’s very clear that her relationship with her husband Kane (Oscar Isaac) wasn’t the happily ever after she led everyone and herself to believe. A major question is why would Kane leave his wife for this death sentence, guarded with secrecy and never divulging to her the objective details. Keeping all this in mind, the final shot is poetic and adds context. Synthetic and electronic scores that contain a slight Western kick from Geoff Barrow and Ben Salisbury heighten the mood, especially during the ending.

As said before, Annihilation is a slowly paced experience that will test the patience of many common moviegoers, but it oozes a unique atmosphere of beautiful dread (courtesy of cinematographer Rob Hardy) where danger is imminent even in broad daylight. The occasional use of lens flaring is also a nice way of reminding us what vivid nightmare these characters are stuck inside. Equally so, perilous confrontations with ugly modified creatures serve as a reminder. However, one can’t shake the feeling that a good portion of Annihilation‘s time in the “shimmer” is filler moderately less fascinating than the full-blown bizarreness that is to come. Still, this is superbly crafted sci-fi designed to get viewers contemplating its themes rather than give a cut-and-dry story depicting what weirdness happened and why. Outside of a theatrical run in America, the rest of the world is actually pushing Annihilation out on Netflix starting two weeks from Friday with the stated reason that it is far too complex for the average moviegoer to buy a ticket and enjoy with a mouthful of popcorn. Their logic is sound; I can’t believe Annihilation is getting a wide release at all (we’re not exactly more intelligent). Between this and mother!, and I’m not complaining by any means, but when did Paramount Pictures become an arthouse studio? Is their genius plan to release crap like Transformers and invest the profits into ambitious projects like mother! and Annihilation, because if so, everyone should get behind that strategy with all other distributors following in their footsteps. Specifically speaking, Alex Garland is 2/2, and I can’t wait to rewatch Annihilation as soon as possible to further digest its greatness.