Brian K. Vaughan and Cliff Chiang’s Eighties-Set Adventure Comic is Greater Than the Sum of its References… 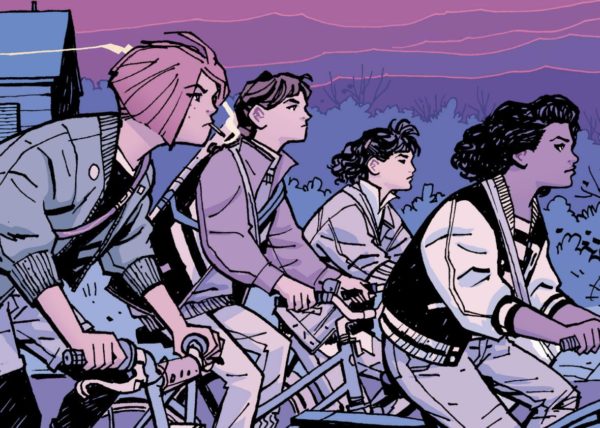 Both set themselves in the eighties and center on a group of pre-teens who discover monsters and mad science lurking beneath the apparent normalcy of their small town. In these ways, Paper Girls functions as a gender-flipped parallel to Stranger Things rendered in panels rather than frames. So, why is it worthy of its own series adaptation?

Paper Girls serves up a temporally twisty narrative that addresses themes around gender, adulthood and fate. Vaughan (Saga and Y: The Last Man) writes these potentially thudding themes with a light touch, warm humor and solid sense of pacing.

Chiang (Wonder Woman) augments the storyline with an art style that manages to feel hand drawn and slick at the same time. The sunset reds, early morning blues and deep purples that comprise the bulk of the color pallet provide an atmosphere sometimes foreboding and other times energetic.

We begin in the early hours of Halloween 1988 when Erin, a rookie papergirl, sets out on her route. A group of costumed teenagers led by a boy dressed as Freddy Kruger (eighties references abound) corner her. But then, out of the predawn blue, three other papergirls show up to rescue Erin. There’s Mac (the rebel), Tiffany (the brainy one) and KJ (the jock). While these characters start out as broad types each becomes fleshed out over the course of events. 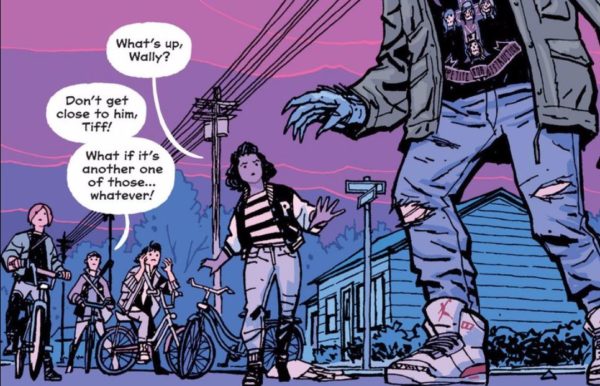 Soon it becomes clear that there are greater dangers than teenage trick-or-treaters. Figures cloaked like ninjas and speaking a strange language stalk the side alleys. The girls find a mysterious biomechanical machine hidden in a basement that looks like it was co-designed by HG Wells and HR Giger. From then on the narrative unspools in highly entertaining fashion.

One difference between Paper Girls and the recent batch of eighties-inspired stories is that the former trims away much of the nostalgia that tends to pervade these depictions. Instead, Vaughan and company aim for, and achieve, a clear-eyed approach that admits the seedy and unflattering shades of the decade. In an interview with the Los Angeles Times Vaughan said: “There’s a lot of dark sadness of the eighties. I just wanted to be honest about that period.” The fact that the series manages to ground itself at all counts as a measured accomplishment given that it takes place in a world where pterodactyls scream down out of time portals and children come face to face with their adult selves.

The paramount relationship in the graphic novel is friendship. The different bonds between the four members of the group take the place of a romantic plotline. Vaughan talked about his choice to define the characters through friendship rather than romantic ties, saying that it was about “letting them and their friendship be the story, not needing the love interest around anywhere.” Vaughan even injects a tongue-in-cheek sequence where a boy and girl are vaporized by a laser blast right after one of them confesses their feelings for the other. Overall, the series fuses violent irreverence with understated humanity. This, coupled with the escalating mystery, makes Paper Girls an ongoing story worth following week to week.