With PSVR not exactly enjoying a surging start to 2018 – we’re still stinging from the disappointment of The Inpatient – Secret Location’s Blasters of the Universe couldn’t really come at a better time. An unassuming VR shooter that excels by executing a familiar premise with sure panache, the game boasts some of PSVR’s sharpest tracking, married to an entertainingly self-aware 80s aesthetic.

Released in Early Access on PC back in the summer of 2016, the game got its full-fat PC release last summer and now finally makes its belated arrival on Sony’s headset. The plot, as expected, is a mere gloss for the frantic shoot ’em up mayhem, with the player tasked with bringing down the evil Grand Master Alwyn and his heavily-populated VR world full of robotic foes of all shapes and sizes.

What’s apparent from the moment you start playing Blasters of the Universe is that it touts incredible controller tracking. While it’s a shame the game doesn’t take advantage of Sony’s criminally under-utilised Aim controller – which could fit the game fantastically with a few gameplay tweaks – the Moves are a more-than-suitable, tactile replacement, as you use one hand to hold the gun and a second to alternate between brandishing your shield and reloading ammo.

The player stands in a generally static position as waves of enemies fire bullets their way. What’s especially nifty about this riff on a fairly by-the-numbers concept is that the player’s head functions as the target, requiring you to duck, weave and contort your body to avoid the sometimes dizzying cornucopia of projectiles heading for your face. 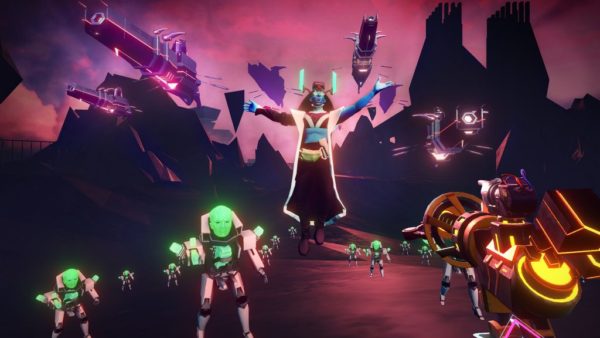 Sometimes, though, all you need to do is keep your head deathly still and allow the frame of bullets to pass around your noggin, which in itself can be both highly stressful and insanely immersive. Not since Sparc has a VR game had me sweating this profusely, and in these chilly months where going outside isn’t such an appealing prospect, that’s very much welcome. In another neat trick, the game reportedly scales the action dynamically according to your playing space, meaning you won’t be braced up against the corner of your bed or struggling to make the game work no matter your spatial restrictions.

The game only offers four levels in its campaign, and while a few more missions would’ve been nice, the ones on offer are incredibly challenging. Even on the comically labelled “casual” mode, you will die. A lot. Bosses can wipe you out fast if you’re not spry and paying attention, and it can often take several playthroughs to figure out their weakness.

This may be irritating if you’re the kind of gamer who loathes repetition, but the overall polish and execution of the game makes it hard to be that mad (and anything different would be counter to the game’s homage to classic bullet hell fare). As for the additional “hell” difficulty, you’ll need to be a weapons-grade masochist to make it through.

What helps shake loose any potential feeling of laboriousness is the impressive customisation suite. Completing each level opens up a number of new weapon parts, ammo types and shields, allowing for thousands of different combinations when it’s all said and done. Tinkering around with the various outfittings – from the functional to the eccentric – definitely kept me intrigued far longer than I would’ve expected, and again, it makes repeating a level for the tenth time a good deal less annoying. There’s always something new to try. 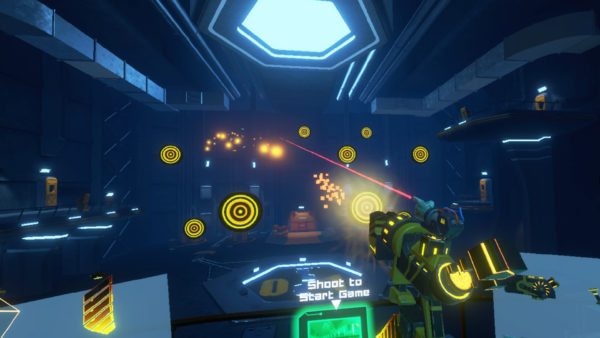 In addition to all this, there’s an Endless Mode, an endurance trial where you can post your score to an online leaderboard; and also Challenge Mode, with a new objective being switched-in every week, be it to shoot down half-a-dozen flying enemies in a single round, dodge 1,000 bullets as fast as possible, or see how long you can last wielding two shields and no gun.

All these things considered, Blasters of the Universe is a good deal more feature-rich than you might reasonably expect from a VR shooter arriving without a good deal of hype and priced at a reasonable price tag of £15.99 (or £13.59 if you’re a PS+ member). It wears its 80s arcade influences on its sleeve, from its neon-soaked visuals to its electronic musical score, which combined with the terrific aforementioned tracking makes the game feel more robust than its throwback style might imply.

A trigger warning for those VR users who aren’t so fond of spiders, though; there are a few spider-like creatures in the game which can jump towards your face if you’re not attentive. It’s certainly nothing on the PTSD-inducing level of, say, Farpoint, but if you’re especially sensitive about it, you may want to consider that before purchasing.

One of PSVR’s most pleasant left-field surprises to date, Blasters of the Universe elevates straight-forward VR shooter mayhem with top-notch presentation and killer customisation. If Aim support ever gets patched in the future, you can probably +1 to the final score. 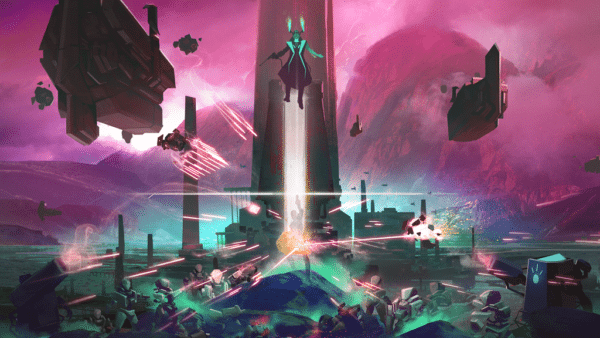