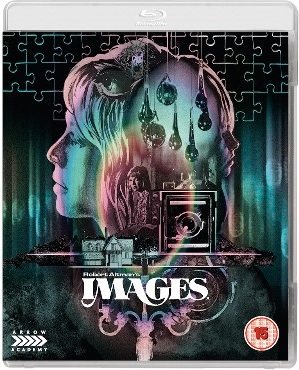 A schizophrenic housewife has visions of different people in her life and starts to kill them off, not being sure if they are real or not.

Essentially, Images is a horror film from a director not normally associated with horror films. In fact, Robert Altman wasn’t really associated with any one genre in particular but was a director that managed to be successful when he did tackle something a little left field, and some of the best horror movies – or at least, some of the standout horror movies – have been made by filmmakers stepping away from expectations and trying something different. If nothing else, Images is a movie that taps into the fundamental nature of horror and how the things most familiar to us can often be the most terrifying.

The central premise is a simple one and that is that well-off housewife Cathryn (Susannah York – Superman), who lives in a remote house deep in the countryside with her husband Hugh (Rene Auberjonois – M.A.S.H.), suffers from schizophrenia and has visions of the people in her life that appear at any given moment. One of them is Rene (Marcel Bozzuffi – The French Connection), her former lover who died a few years ago, and another is Marcel (Hugh Millais – The Wicked Lady), a local neighbour and another former lover who wants to rekindle their affair, and as Cathryn and Hugh go about their daily business the three men start to appear more frequently to her to the point where she cannot differentiate who is who and, more importantly, who is real, leading to tragic consequences.

A beautifully shot but tonally quite bleak piece, what makes Images so engaging from the start is that it is quite clear something about Cathryn is not quite right and as things start to happen to her we discover little details, usually dropped lines of dialogue that you could easily miss if you’re not paying attention, about her life up to that point that paint a picture of a very damaged and sympathetic character. The story is told from Cathryn’s perspective and Susannah York does a fantastic job of making her an interesting but unreliable narrator, similar to Mia Farrow in Rosemary’s Baby but whereas Rosemary wasn’t sure if was imagining it or there really was something wrong with her situation, Cathryn seems all too aware that she is having a breakdown – she openly converses with somebody she knows to be dead, after all – and long before the film finishes the audience is faced with the obvious conclusion that things will not end well for Cathryn.

Like a lot of small-scale psychological horror movies, Images is a slow burner that relies on a strong central performance and a director with vision and style that can add those nuanced touches that often go unnoticed on a single viewing, and Images is a movie that will take more than one watch to sink in and fully appreciate. There are small moments of violence and splashes of gore that are more incidental than gratuitous, the real horror coming from Cathryn’s sense of confusion, the realisation that Cathryn is not going to escape her demons unscathed and from the hallucinogenic quality that Robert Altman employs to most of the imagery. The film was shot in Ireland but no location is ever given during the runtime so it could be taking place anywhere, and Altman uses the setting of rolling hills combined with shadows and strong lighting to create some truly creepy set pieces – such as the scene early on where Cathryn stands on top of a hill and sees herself arriving at her home down below, only for the arriving Cathryn to look up and see herself standing on the hilltop – that later movies such as Don’t Look Now and Lars Von Trier’s Antichrist have evoked to some degree.

Coming complete with an audio commentary by Daughters of Darkness podcast hosts Samm Deighan and Kat Ellinger, selected scene commentary by Robert Altman, an archive interview with Altman, a new interview with actress Cathryn Harrison and an appreciation of the film by author Stephen Thrower, who details a lot of the film’s production and initial reception at the 1972 Cannes Film Festival, the 4K restoration lacks a lot of the crisp detail you would expect but that is down to Robert Altman and cinematographer Vilmos Zsigmond’s original look for the film and their shooting techniques that lend themselves to a more natural colour palette and dream-like ambience rather than any restoration errors. Not a horror film for a festival crowd or a boozy Friday night no-brainer, Images is nevertheless an immersive and haunting horror experience for those seeking a different kind of terror from the norm and one that gets more rewarding with repeated viewings, if only to admire the craft that went into making it.