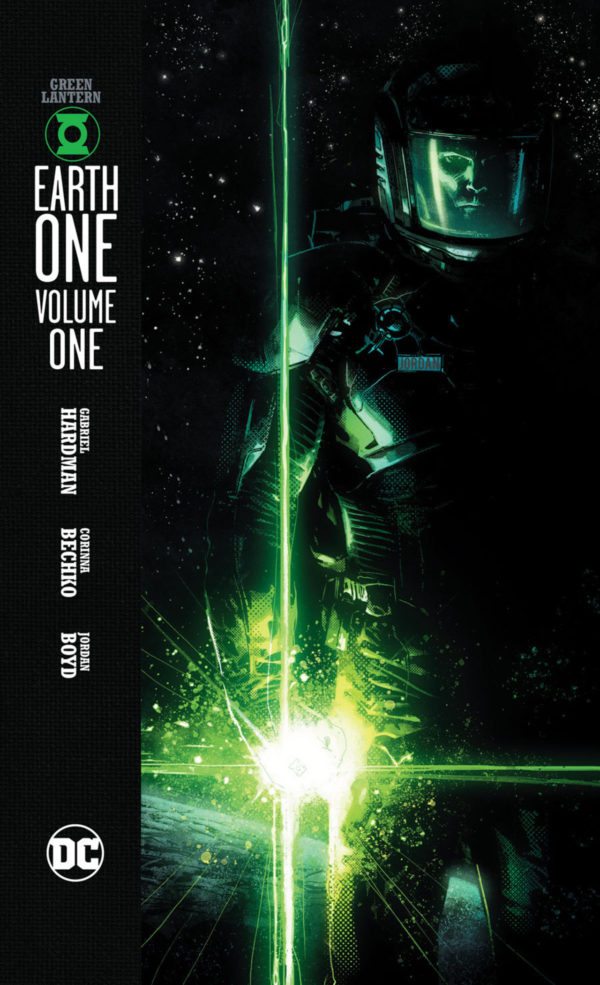 DC’s latest graphic novel in the Earth One series goes full-out sci-fi as husband-and-wife team Gabriel Hardman and Corinna Bechko deliver a re-telling of Hal Jordon’s origins in Green Lantern: Earth One Vol. 1. As with the previous Earth One books, they make changes to the traditional origins of the superhero, yet still retain some familiar elements for longtime fans. In the case of Green Lantern, all the changes made enhance the story and this new version of Jordon and the Green Lantern Corps while still honouring the essence of their universe. Out of all the Earth One books, Green Lantern is the best of the series.

Green Lantern: Earth One reimagines Jordan as an astronaut out in space who doesn’t even think about going back to Earth, but not because he views space as an exciting and endless adventure. Rather, he wants to escape from the depressing and dark events of the planet and harbours a secret guilt from his past. When he finds a crashed ship with a dead alien inside, his life is forever changed as he discovers the stories of the almost mythical Green Lantern Corps and joins their ranks.

In another change to the normal mythology, the GLC is much more like the Jedi Order of the Star Wars franchise: an ancient peace-keeping force that was wiped out from within and are so scarce throughout the universe its rare to even see one, much less believe they hold up to all the legends. Rather than the rings finding a new bearer after one dies, the rings instead stay with the body until a new bearer happens upon it. Its an interesting change from the mythos, but it works really well here as Hardman and Bechko focus on the power of hope and belief. Indeed, one of the central themes of the story is Jordan’s belief in himself to not just make a difference, but finding that willpower within himself to enforce that positive change.

The strength of the book is in how it embraces its sci-fi roots. Unlike the 2011 Green Lantern film, Earth is only seen very briefly in flashbacks with the rest of the story spanning the unknown galaxy. Its a very refreshing change of pace, especially after the Earth One books have remained, well, Earthbound. The collection of various aliens throughout the story really gives life to the sci-fi aspect as Jordan interacts with so many different races.

Bechko and Hardman’s characterization of Jordan works very well. While some aspects of his personality, such as his cockiness or flyboy attitude, are either absent or toned down, he is still very much the Green Lantern fans know. He becomes even more familiar as the story goes on, taking on some of his more traditional characteristics and growing fearless. There is a clear evolution to his character that grows throughout the story as he embraces his new role and destiny. Its one of the more clearer character arcs the Earth One books have displayed.

Jordan doesn’t get sidelined by the supporting characters, though many of them get some time to shine. The book has some nice roles or cameos from characters most Green Lantern fans will recognize. However, this is also one area Bechko and Hardman didn’t quite take full advantage of. They had a chance to really branch out and introduce some new members of the Corps or radically alter their appearances, emphasizing their alienness, yet many of the supporting characters appear as they usually do in the comics or aren’t new creations. It would have been nice if they really branched out with the character designs or introduced some new faces.

That said, though, Hardman’s art is great throughout the book. His work on Jordan is one of the strongest aspects, especially with his facial work as he makes Jordan quite expressive. Even the aliens he illustrates look very expressive, mo matter if they just appear in a couple short panels. The opening pages draw you in as Hardman emphasizes the danger, loneliness and excitement of space and keeps you hooked throughout Jordan’s journey across the stars. The art is elevated by Jordyn Boyd’s vibrant colours as well. Each location Jordan visits looks different as Boyd uses a variety of colours to give it its own distinctive look and feel.

While books in the Earth One line have been hit and miss, Green Lantern: Earth One Vol. 1 is most definitely in the hit section and is arguably the series’ best yet. It simultaneously embraces the mythology while putting its own spin on it and delivers a true sci-fi adventure that doesn’t shy away from the source material’s fantastic elements. Bechko and Hardman write a compelling script while Hardman and Boyd make a visually great book that helps make it stand on its own.